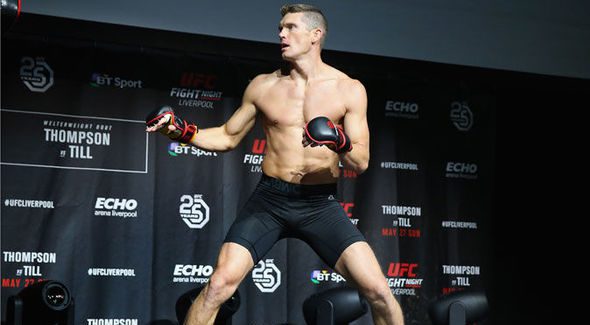 Stephen Thompson is unsure if returning to the Octagon at this point of time would be the best move for him, in light of the ongoing coronavirus pandemic.

Speaking to MMA Fighting, Thompson showed his concern towards the elderly and made it clear that he doesn’t want to take any risks that can bring the virus back to his hometown.

“For me, as a fighter, the fighter in me says yes. I would want to take the fight for sure,” Thompson said. “If they take the right precautions, which I think they are, with travel and everything—It’s just, you know, South Carolina is full of grandparents. It’s full of elderly people and we have a lot of kids at our school that are being raised by grandparents, their grandparents take them, and they’re in their 80s and 90s. So it’s something that I would never want to bring back to them because just the way things are going.

“If they make the right precautions, then for sure, the fighter in me says yes. The karate instructor in me says it would be very difficult for me to do that for sure. Because this is my number one thing. I fight for the fun of it. I just love to compete, the money’s a bonus, but my job is right here at the gym. That’s what I love to do, is teaching kids. So I would have to sit down with my pops, the boss man, and see where we go from there. But the fighter in me says I would love to.”

While many MMA fans all around the world couldn’t be happier to see the UFC return this weekend with the rescheduled UFC 249, UFC president has had his fair share of criticism for pushing on with his events. Thompson believes that you can never make everyone happy

“There’s always gonna be somebody upset. Always,” Thompson said. “It really is and I know that firsthand. I feel like I’m kind of a likeable guy, but there’s always that one person out there that just wants to like, ‘ugh’ [makes jabbing motion], especially on social media.

“It’s the same everywhere you go. There’s gonna be somebody that’s gonna be upset with whatever answer they get, so all you can do is keep on keepin’ on.”

In his last fight, Thompson faced Vicente Luque at UFC 244 last November. After dominating the fight, ‘Wonderboy’ won via a unanimous decision, which earned him the Fight of the Night bonus award.

Although, Thompson cannot predict when he will step back inside the Octagon, he does have an idea for who his opponent should be on his return.

“Those are always the guys that I’m looking for, anybody in the top five for sure,” Thompson said. “You’ve got Leon Edwards—I’ve already fought Tyron twice, I don’t think anybody wants to see that again—but Colby Covington for sure. Both guys are very, very high level in their craft, and I think that Leon Edwards is the better MMA fighter than both. He’s got really good striking, and that’s what he was, in the beginning, was a good striker, but now you’re seeing him use his wrestling, his jiu-jitsu, he used it against RDA. When he fought Vicente Luque, he took him down, I was like, ‘What the heck?’ And those are the guys you really have to prepare for because they’re different every time they step out there and Leon Edwards is that guy, which is why he’s on a crazy fight winning streak.

“Colby Covington, everybody knows what’s gonna happen when I fight him. He’s just gonna shoot and shoot and shoot and shoot. His striking doesn’t even compare. Could he hit you and knock you out? For sure, but I’ve definitely fought better strikers than him and I think Leon Edwards is the better MMA fighter for sure and those are the guys I want to fight right there. Anyone of them, I really don’t care at this point in my career. I’m ranked number five, I’ve got a small window to kind of do what I want to do and I want to fight the best in the world. Who can say that, right? It’s like an anime. You’re fighting the best guys in the world, it’s crazy. I’m like, heck yeah man, let’s do it.”

Who do you think would pose Stephen Thompson the biggest challenge in the UFC welterweight division?