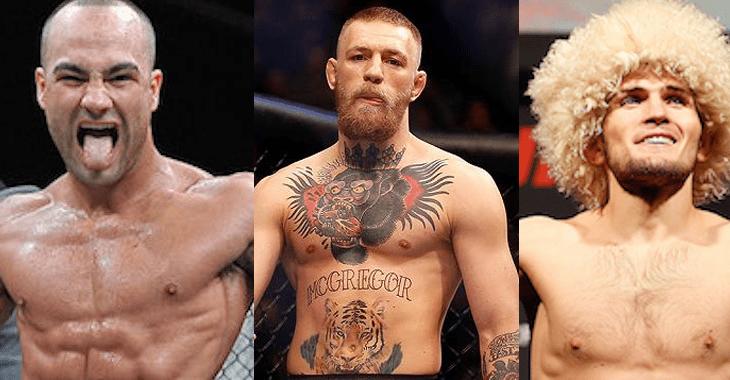 Though he is now signed to ONE Championship, Eddie Alvarez is still remembered for his accomplishments in the UFC. While there, he captured the lightweight title. In his first title defence, he lost the belt to Conor McGregor at UFC 205. By winning the lightweight title, the Irishman became the first fighter in UFC history to hold two belts simultaneously.

For a while, McGregor experienced great success inside and outside the Octagon. Last weekend at UFC 257 however, he suffered the first TKO loss of his career to Dustin Poirier. Speaking on Morning Kombat (as transcribed by MiddleEasy), Alvarez said that the former two division UFC champion was not prepared for ‘The Diamond’s’ gameplan.

“Dustin Put Him Away”

“[Dustin] put a sprint on [Conor],” Alvarez said. “Mike Brown had a good gameplan of chopping that lead leg down, they chopped that down really well. Then Dustin put that sprint on him that Dustin does so well.

“It caused panic, caused Conor to make mistakes. Conor wasn’t able to stay outside and be creative, and Dustin put him away. He has the power to do that.”

Alvarez further sang the praises for Poirier, who lost by first-round knockout the first time he fought McGregor at UFC 178. Since facing off in 2014 however, the Louisiana native has only lost twice in 14 fights.

“If anybody deserves the accolades and that kind of victory, and a big crowd, it’s Dustin Poirier. He’s fought the best of the best in that division, one after another, and he deserves that victory.”

Despite the devastating loss, Alvarez believes McGregor can get back to winning ways. While ‘The Underground King’ understands that it’s difficult to stay motivated when you have as much money as ‘The Notorious’ does, he believes that if the former UFC double-champ can go back to being the motivated fighter he once was early in his career, before the titles and the money, he can come back stronger.

“I think it’s difficult to fight with $100 million. It’s very simple to fight when you ain’t got a pot to piss in or a window to throw it off,” said Alvarez. “You almost have to fight. It needs to become part of your character in order to be successful. You need to become a fighter.

“[Conor’s] done that, and he’s showed that he can do that and beat the best guys in the world when he’s hungry and motivated. He’s got to sit down, reevaluate some things, and find that guy again that he was. I think he’s inside of him, but it’s a matter of bringing him out, evoking that ego, evoking that guy again. It’s going to be his own choice and his own desire.”

“I’m His Only Matchup That Would Make Any Sense”

Despite fighting a majority of the great lightweights in the UFC, one fighter Alvarez never got to face was the current UFC 155lbs champion, Khabib Nurmagomedov. But despite the fact that he’s now with ONE, the 36 year old still believes that he has the skills to beat ‘The Eagle’.

“I’m athletic, I have a strong spirit, a strong heart, and I will fight, I’ll fight to the death. Tibau had a great, solid gameplan, and he arguably won that fight. He was able to match Khabib’s strengths, he was able to throw good, straight shots, and he was able to negate a lot of Khabib’s wrestling. That’s what I’m able to do against virtually every opponent I’ve fought. Styles make matchup, and anybody who’s in this sport at a high level knows that. I just think that matchup in general would have been something special.”

Eddie Alvarez is scheduled to face former ONE lightweight title challenger Iuri Lapicus at the first of four ‘ONE on TNT’ events on April 7th, which will be aired on prime time in the United States.