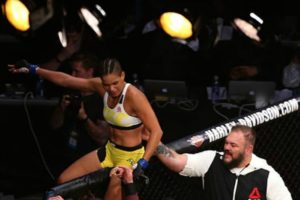 Following UFC 232, both Dana White and Amanda Nunes said they didn’t think Cris Cyborg should get an instant rematch. Now Amanda’s coach Conan Silveira has said the same thing and put his case across as to why not.

Whilst on the MMA Hour, Silveira had this to say on the possible rematch. “I’d never put it that way, to say it’s not possible [for Cyborg to beat Nunes in a rematch]. I’d just explain it in the way of how Amanda is as a fighter. I believe for you to get close to her you have to understand fighting more than she does and I think that, right now, I don’t see anybody [who understands fighting as much as she does]. Of course, I’m not in any way disrespecting Cyborg or any other fighter, but I don’t see that. I think Amanda is on a different level of MMA.”

“The reason why I say I don’t believe that I don’t think that there will be a rematch is because I think a rematch should only happen if it was a split decision, or even a unanimous decision where you probably don’t know which way the fight was going to go. When you knock somebody out don’t come to me and say that it was lucky, ‘Oh it was a lucky shot’ — no. That was very visible and clear that Amanda knew what she was doing, everybody saw it and Cyborg could not handle it. I don’t see why you would have a rematch.”

On one hand, a champion like Cyborg undoubtably deserves a rematch. But on the other hand, it’s also difficult to justify an immediate rematch when the fight was over in 51 seconds. There’s a couple of things we know for sure though. Firstly, Cyborg earned hell of a lot of respect for the way she accepted defeat to Nunes, having not lost since 2005 (Watch how Cyborg took the loss here). And secondly, is there a women on the UFC roster that can challenge Nunes right now?

Whoever she’ll fight next, Dan Lambert, the ATT boss, believes that Nunes will defend both belts. You can read more about that here.