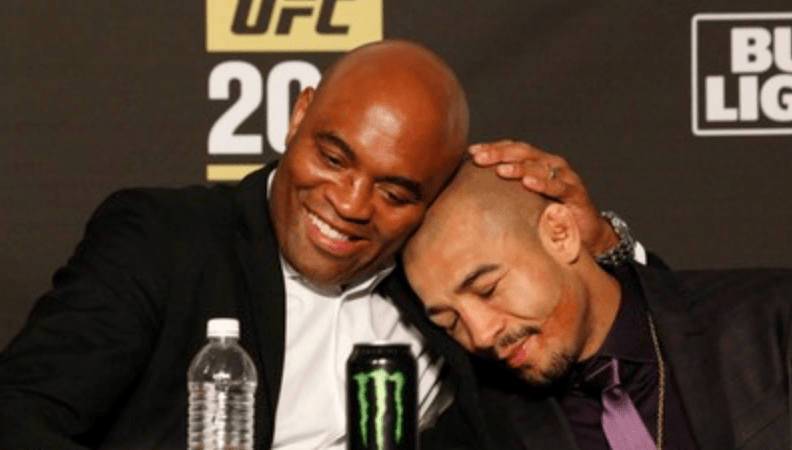 At UFC 237, until Jessica Andrade beat Rose Namajunas in the main event, to win the UFC women’s strawweight title, it had been a tough night for the other Brazilian fighters on the card.

And no more so than for Brazilian legends, Anderson Silva and Jose Aldo. Silva’s fight ended early in the first round, when he collapsed to a kick to the knee from opponent Jared Cannonier. Aldo lasted longer but still lost in convincing fashion to Alex Volkanovski, losing via unanimous decision.

Both men have since taken to social media to post statements on their losses. Silva gave a very philosophical reaction to his loss, comparing himself to ‘an old lion, surrounded by hungry hyenas’.

Which when translated, reads:

“Speak my people. ATE THE LIMIT. Pain is your friend. It shows that you’re not dead yet. They say that great symbols become great targets, perhaps but the most important thing is not to get victimised. If you fall, get up. If broken, don’t give up or think you can not because you lost a battle. The saying is one, I go until the end and the more I press but I will want to go to the end. There is nothing wild that feeling sorry for yourself. An old lion surrounded by hungry hyenas, crazy to devour him and he yet he fights to the death, without ever feeling sorry for himself. And will not be different with me!!!! Strength and honour!!!”

Aldo was less philosophical and more disappointed, saying he had never fought so badly in his life.

Which when translated to English, reads:

“I would like to thank everyone who was there and thanked everyone in the arena and in their homes, thank you very much. Thank all my team @dede_pederneiras @mabogea @guidarellif the trainers @emersonfalcaovieira @aleksandrofg @piratiev_oficial @rafaelviniciusbertho who pushed me like I’ve never been before! But I have never fought so badly in my life. Without excuses because that was not me. I know of my ability and talent, without taking the merits of my opponent who made his fight but I am sad with myself and I blame everything on myself because I let it happen and I did not do the fight I was supposed to do. It’s over and let’s move on!”

Where do you think Silva and Aldo should go from here?