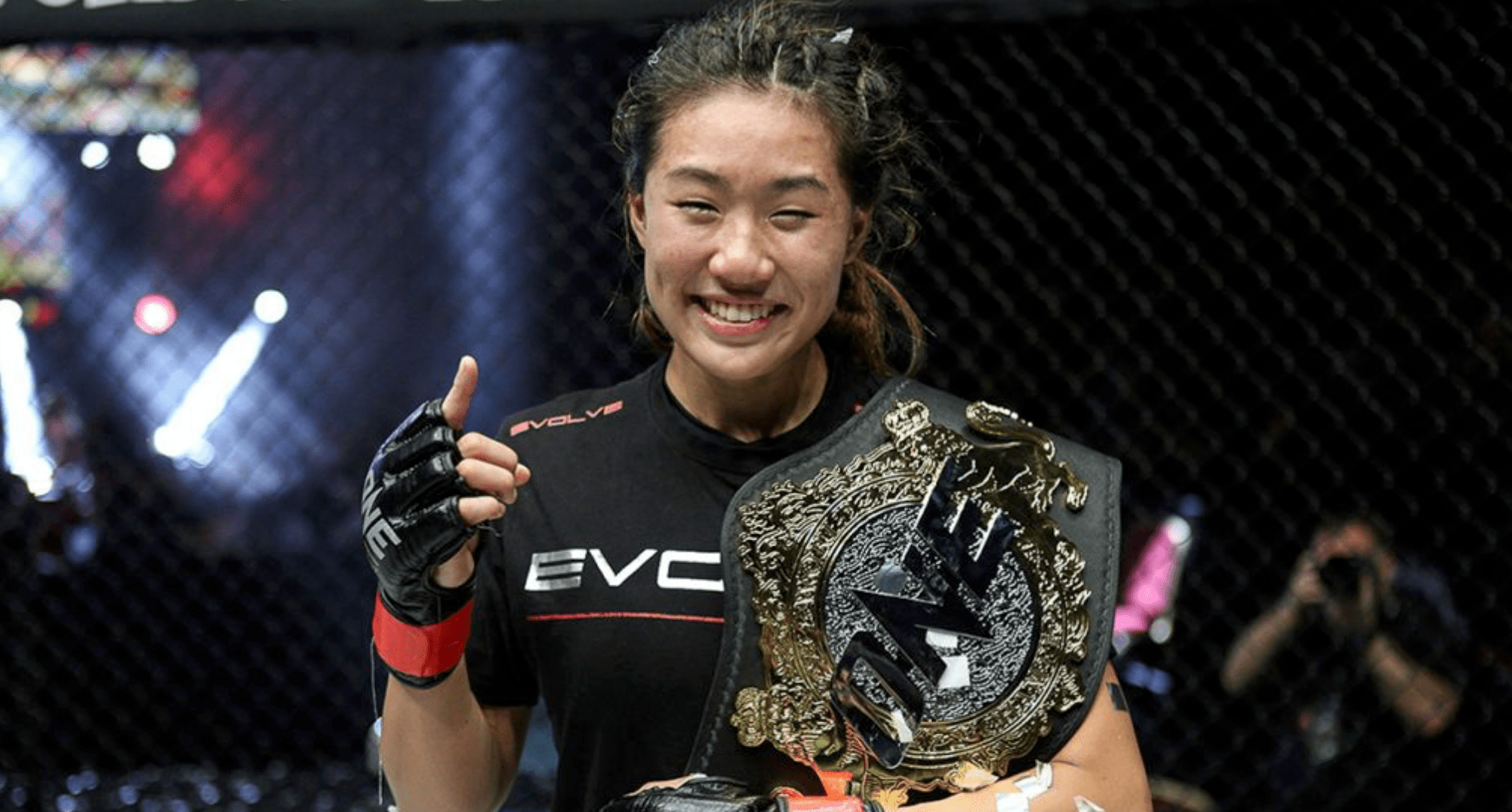 After nearly six weeks of events held in Bangkok, ONE Championship will resume hosting global events next month. This means more big fights, featuring the megastars ONE fans have grown to love. Perhaps one of these megastars will include the ONE atomweight champion, Angela Lee.

Lee last fought last October at ONE: Century, where she successfully defended her atomweight title against Xiong Jingnan. Since then, coronavirus restrictions have forced her to stay put in Hawaii. Prior to the global pandemic, ‘Unstoppable’ was scheduled to defend her belt against rising star Denice Zamboanga. Speaking to Nick Atkin of SCMP MMA, the champion discussed her title challenger.

“I saw Denice’s match was quick. I don’t know much about the opponent (Watsapinya Kaewkhong) she faced,” said Lee. “She’s lucky that she’s able to fight. I know a lot of people in Thailand are fighting back-to-back. I guess all the other fighters must be jealous. With the travel restrictions, we just can’t be active.”

Lee believes that Zamboanga secured her title shot with her victory over Mei Yamaguchi this past February at ONE: King Of The Jungle. She believes that ‘The Menace’s’ win at ONE: A New Breed was merely a warmup fight for her to stay in shape and gain more experience.

“I think the only fight that really justifies Denice as the top contender is her fight with Mei Yamaguchi. This fight (against Kaewkhong), I don’t really know who the opponent was, she wasn’t ranked or anything like that.”

While Zamboanga is focused on her title fight with Lee, it may have to wait due to the travel restrictions in place. Denice told us after her latest win that she’s happy to continue taking other fights to stay active, if necessary. ‘Unstoppable’ however, believes in quality over quantity.

“I’m sure she’d like to get a few more fights in. The more experience, the better. But for me, I’ve never really had ring rust or seen that as a problem. As a champion, I only fight two times a year. And sometimes there’s a long layoff in between.

Chatri Sityodtong believes Zamboanga could pose a legitimate threat to Lee in a title fight. Also speaking to SCMP MMA, the ONE CEO said he sees ‘The Menace’ as a future world champion.

“I think Denice has earned the number-one contender spot definitely. She’s 8-0, she’s steamrolled everybody,” Sityodtong said. “In the arena, she goes a hundred miles an hour. Endless cardio and super aggression. I can see Denice, in the future, being a world champion. Her striking is still a little bit low level, her grappling is pretty good. But her aggression and her size for the division is what separates her.”

ONE Championship Heading To The US?

With the United States being hit hard by the pandemic, it’s hard to imagine when the 24 year old can travel out to fight again. But the ONE lightweight contender Eddie Alvarez has hinted at the possibility of ONE Championship doing an event in the US. For Lee, the prospect of an American show would be ideal.

“I’ve had no updates regarding when my next fight will be, what the timeline is. It’s kind of complicated. It’s really out of our hands,” Lee said. “Regarding fights in the US, I would love it. It’s still a little bit of a flight for us because we’re in Hawaii but that would be nice. But given the situation in the US right now with the coronavirus happening and a lot of states still having lockdowns, I’m not sure how soon that will be. I think it would make more sense to have fights in Hawaii. It’s the gap in between Asia and North America. So I think that would be really nice and that would be perfect for me and my brother (Christian Lee). But who knows? It’s really hard to say when things can happen because things are changing daily.”

Several days ago, Lee’s brother Christian posted on social media that he had began fight camp, implying that he had a fight coming up. Angela says that the Lee clan are just staying prepared for when they get the call.

“Nothing is written in stone right now,” Lee said. “But of course me, Christian, Bruno [Pucci, Angela’s husband], we’re all staying extremely active and ready. So that when we get the call, if it’s a week out, or two weeks out, we’ll be ready to go. As far as I can say, nothing is a hundred percent right now. But I’m sure some news will be breaking very soon.”

Lee is half of a sibling duo that holds world titles in ONE Championship. Her brother Christian is the ONE lightweight champion. A prominent name that has expressed interest in facing ‘The Warrior’ is Eddie Alvarez. While Angela believes a match between the two would be interesting, she thinks there are other contenders who deserve a title shot before ‘The Underground King’.

“I’d love to see that matchup. I think it’s very exciting and it’d be interesting to watch. So some time in the future, it would be good to see that fight. But as of Christian’s next fight for his title defence, I think there are a couple of other fighters that are ahead in line than Eddie.”

Even with Zamboanga set to challenge her for the title, Lee has expressed interest in facing the former two-sport world champion Stamp Fairtex. ‘The Menace’s’ former teammate is currently 5-0 in mixed martial arts. Her most recent victory coming against Sunisa Srisen at ONE: No Surrender.

Stamp recently lost her ONE atomweight Muay Thai title to Allycia Araujo, leaving her without any title belts. While she’s still interested in fighting the Thailand native, Lee also revealed that she reached out to the Fairtex stalwart and offered her support.

“I reached out to her personally,” Lee said. “I DM’ed her Instagram and said, ‘Hey, keep your head up, champ. You fought hard. You have a lot of heart.’ It’s all love, really. I know we’re all competitors but I felt for her. So I just reached out and sent that message.

“I’d still love to fight Stamp in the future. I think that she definitely needs some time right now.”

Will Angela Lee successfully defend her title against Denice Zamboanga once they’re finally able to step inside the ONE Circle together?