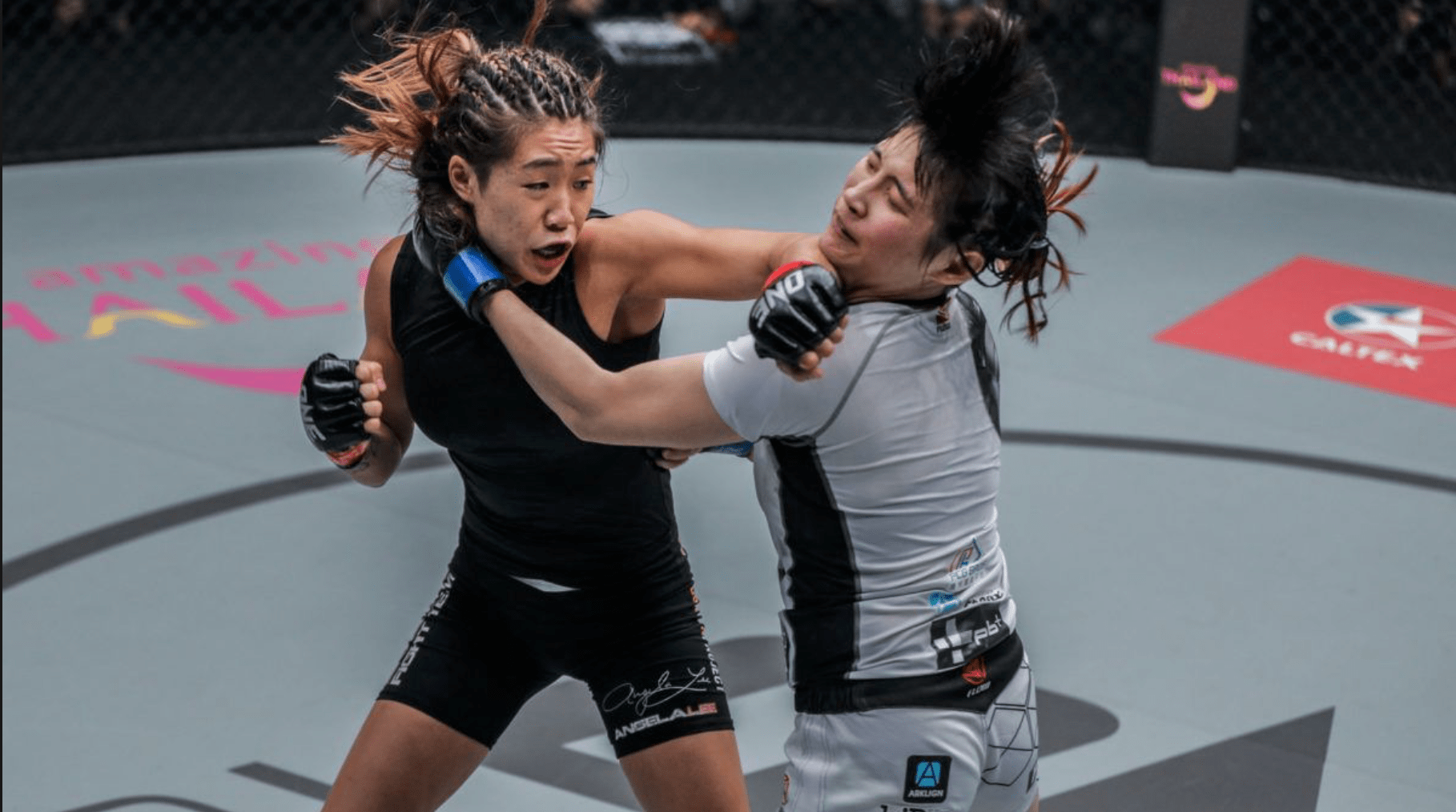 22-year-old phenom “Unstoppable” Angela Lee is already one of ONE Championship’s biggest stars.

The reigning ONE Women’s Atomweight World Champion is set to challenge China’s “The Panda” Xiong Jing Nan for her ONE Women’s Strawweight World Title at ONE: NEW ERA in Japan on March 31.

When the battle commences, Lee will be looking to make an emphatic statement, and the best way to do that is to win via stoppage. That’s something Lee has been good at since she began her mixed martial arts career.

Here is a look at the five best stoppage wins for Lee:

Natalie Gonzales Hills – ONE PRIDE OF LIONS – November 2015 – The Twister

One of the rarest submission maneuvers in mixed martial ars is the Twister. You rarely see anyone finish an opponent with the maneuver in professional matches. It takes an extraordinary level of skill and a great advantage on the ground to secure that kind of finish.

That exact combination was in play for Lee when she met up with Hills at ONE: PRIDE OF LIONS.

After quickly taking the action to the ground, Lee assumed top position. With one hook locked in against Hills, Lee pounded away with her right hand, doing damage to her opponent as she plotted her finishing maneuver.

The two fell to their sides and Lee noticed the opportunity to lock in the advanced submission. Lee tightened the squeeze and within a second, Hills was forced to tap out vociferously to the pressure.

Lee erupted with emotion after the dominant performance. The win helped announce her to the combat sports world and pushed her record to 3-0.

If you wanted to know if Lee has the ability to work through adversity, her match with Tkhorevska was the first example. The first round between the two women was very close.

There were a number of high-level grappling exchanges, and before the action went to the mat, Tkhorevska landed a huge overhand right on Lee’s jaw. Lee took the blow well, but quickly brought the action to the ground where she had an advantage.

Lee’s edge was purely technical as Tkhorevska’s strength, athleticism and dexterity proved to be a problem. Tkhorevska maneuvered out of a few precarious spots to make it into the second round.

In the second frame, Lee again fought through some tough grappling sequences before taking her opponent’s back and locking in the submission to get the win.

We learned a lot about Lee’s toughness in this match, and she ran her record to 4-0.

The next stoppage came much easier for Lee. Facing Heintzman, a tough opponent, but not nearly the natural athlete or skilled grappler required to give Lee the kind of battle necessary to push her at that stage of her career, the rising star would shine.

After the early moments of the first round featured a lot of jockeying for position in the clinch, Lee took Heintzman down. Lee threw a series of submission attempts at her opponent including a Peruvian Necktie.

While Heintzman survived the round and was excited at the conclusion of the first frame, she wouldn’t last long in the second. Lee wasted even less time taking the battle to the ground, and she’d soon lock in a neck crank that forced Heintzman to tap.

Lee looked as confident in this bout as she had at any other point in her career. She would go on to battle Mei Yamaguchi in a classic in 2016 contest that earned Lee the inaugural ONE Women’s Atomweight World Title.

Up to this point, Lee had never stopped an opponent with strikes. The bout with Huang was Lee’s first title defense since winning the belt 10 months earlier. From the outset, Lee showed herself to be the superior striker. She got the better of Huang on every exchange on the feet.

For the first two-plus rounds, Lee tagged Huang with jabs, right crosses and punished her midsection with knees from the clinch. By the middle of the fourth round, a worn-out Huang was easy to take to the mat. Once Lee got the action there, she pummeled Huang until she tapped out due to strikes. The referee called the fight at the same time. In any case, Lee’s first title defense was a dominant one.

While the speed and striking game were in Nunes’ favor, as was the case in other Lee bouts, the difference was the grappling. Nunes connected with two kicks and some jabs early in the first round, but they proved inconsequential. Ultimately, Lee would get the bout to the ground courtesy of a headlock takedown. Lee then took control in a major way.

She nearly secured another Twister but settled for a nearly innumerable amount of punches to the face from the position.

In the second, Nunes tried to stay off the canvas, but couldn’t. Lee snapped her to the ground with an Anaconda Choke and finished the bout with that submission to move to 8-0.

After another win over Yamaguchi, Lee is now 9-0. Will we see her 10th win against Xiong, and another memorable finish? We’ll find out at ONE: A NEW ERA.

Tagged: Angela Lee, Atomweight, ONE Championship, ONE: A New Era