Aspen Ladd Has Had Her Bantamweight Licence Suspended By CSAC 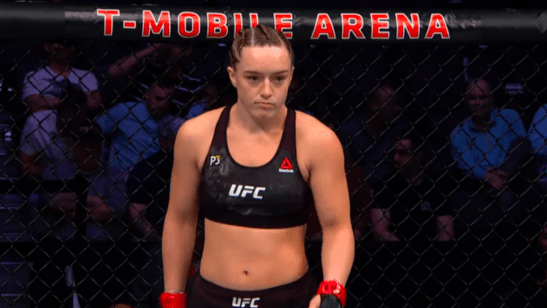 Aspen Ladd has had her bantamweight licence suspended by the California State Athletic Commission (CSAC). Ladd fought in California last month. She lost to Germaine de Randamie, via TKO after only sixteen seconds of the first round, in the UFC Sacramento main event. The 24 year old also made the headlines for the wrong reasons the day before, after she looked visibly in pain during the weigh-ins.

Come fight night, Ladd had gained 24lbs since the weigh-ins, weighing 159lbs. A whopping increase of almost 18%. Last summer the CSAC began releasing how much the fighters weighed on fight night and recommend any fighter whose weight had gone up by over 10% from the weigh-ins to fight night, move up a weight class.

The news of the suspension comes just a day after it was announced that Ladd would face Yana Kunitskaya at UFC Washington on December 7th, in a bantamweight contest. However, the suspension hasn’t ruled Ladd out of the clash. She will be cleared to compete if she can provide the necessary documentation from a licensed physician, verified by CSAC physicians, proving that she can compete at 135lbs safely.

Speaking to ESPN, CSAC executive officer Andy Foster, said that Ladd will work closely with the UFC Performance Institute in Las Vegas, to build a nutrition plan that will need to be approved by the CSAC.

CSAC physicians will then monitor her weight leading up to the Washington card. Ladd trains at MMA Gold in Folsom, California, which is less than 30 miles from CSAC’s offices in Sacramento.

Do you think Aspen Ladd should move up to featherweight?