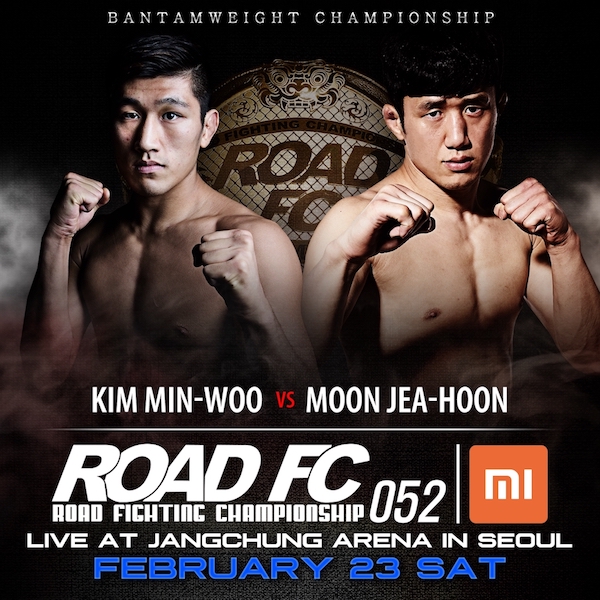 ROAD Fighting Championship announces the Bantamweight Championship for ROAD FC 052 which will take place on February 23, 2019 in Seoul, South Korea.

The ROAD FC Bantamweight Title has long been a very hotly contested title. The first Bantamweight Tournament yielded the first Champion, Kang Kyoung-Ho, one of the best bantamweight fighters in the world today. After he relinquished it, Lee Kil-Woo won it, then had to return it due to a surgery. Lee Yun-Jun then fought Moon Je-Hoon and won, but a tragic health issue kept him from defending. Kim Soo-Chul finally got his shot after an incredible win streak, and defeated Kim Min-Woo to become the fourth Champion. Kim Soo-Chul retired and vacated the title.

At ROAD FC 052, the last two challengers for the Bantamweight belt will face off for the chance once again to own it. This will be a rubber match, as they have fought twice before, each holding a decision win over the other.

Kim Min-Woo (8-2, Moai Gym) is a very well-rounded fighter with wins over Shoko Sato and Yuta Nezu. His only losses come against Moon Je-Hoon – which he avenged in their second meeting – and the title match against Kim Soo-Chul. Moon Je-Hoon (11-12, Octagon Multi Gym) is a Taekwondo specialist and a stalwart of Korean MMA. He has been representing ROAD FC in RIZIN and DEEP in the last two years, and counts many fight of the night accolades in his 11-year career.

The ROAD FC Bantamweight Championship match between Kim Min-Woo and Moon Je-Hoon promises to bring another amazing performance from these two aggressive rivals!

Added to ROAD FC 052 is a bantamweight match between Jang Ik-Hwan (6-2, Team Posse) and Jang Dae-Young (5-2, ByeongJeom MMA). Jang Ik-Hwan is a Muay Thai fighter who showcases his specialty in every exciting match. Jang Dae-Young is an aggressive fighter known for winning his feud with Park Hyung-Geun. Expect fireworks as these two look to climb into contention for the bantamweight belt.

After multiple Trials of over 40 fighters, and 16 who made it to the brackets of the ROAD FC $1 Million Lightweight Tournament: Road to A-Sol, the finals is set. Two of the best lightweights in the world, Shamil Zavurov and Mansour Barnaoui, will face each other at ROAD FC 052. Zavurov has relentless takedowns and gruelling wrestling, plus his striking acumen was revealed against Brazil’s number one Ronys Torres. Barnaoui is a young phenom with excellent timing and flawless grappling, with a high finish rate and excellent gas tank. The world will be watching as the tournament for the $1 million concludes!