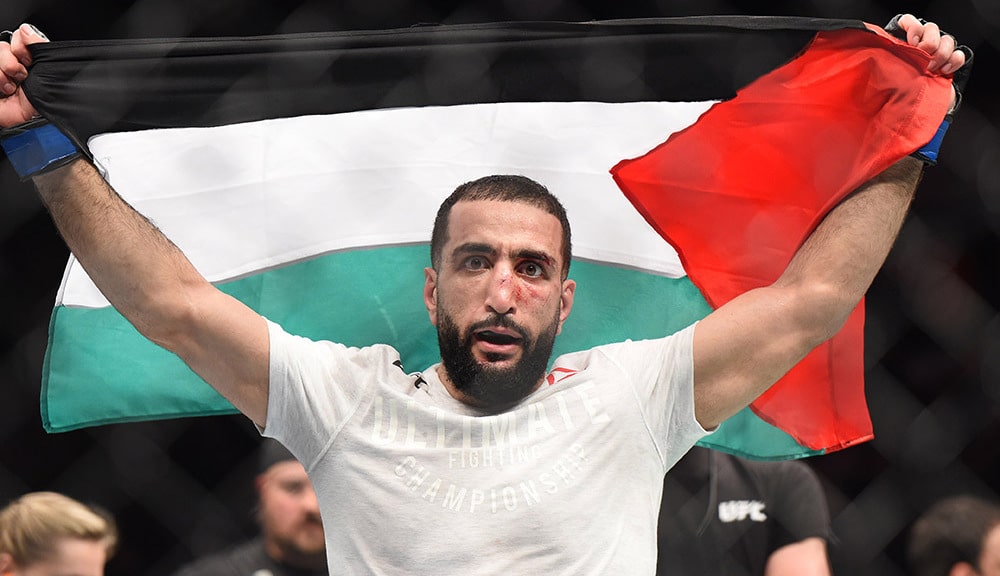 Ahead of his welterweight bout with Demian Maia at UFC 263, Belal Muhammad has opened up on the ongoing crisis between Israel and Palestine.

The most recent Israel-Palestine crisis was triggered on May 6th, when Palestinians began protesting over an anticipated decision by the Israeli Supreme Court to evict six Palestinian families in the Sheikh Jarrah neighbourhood in East Jerusalem, to make way for Jewish settlers.

Nothing To Do With Religion

Speaking to MMA Mania, Muhammad, an American of Palestinian descent, said that criticism of the Israeli regime isn’t anti-Semitic, because the Israel-Palestine issue has nothing to do with religion.

“I literally love Jewish people. Our religions are close when you speak about our religion. When people say you’re anti-Jewish or anti-this, bro, my best friend is Jared Gordon and I’m going to be standing up at his wedding. People are nuts. It literally has nothing to do with religion, it has to do with humanity. People are literally dying and people are losing their homes.”

No Justification For Killing Innocent People

Muhammad also condemned those using Hamas as a justification for killing innocent Palestinians.

“You show a picture of kids dying and I get so many comments like, ‘What about Hamas?’ Bro, you think this 3-year-old kid that just got bombed and killed is Hamas? People look for keywords, trigger words that will get other trolls that just comment on your thing to get a rise out of you.”

While both sides reported casualties in May, the numbers were much higher on the Palestinian side, something Muhammad believes the world should know.

“What would you think if I said, ‘Yo, Group A has over 300 kids died, 1,000 people displaced from their homes, and Group B has 10 deaths and one of the biggest armies and all these weapons and all this money?’ Which side are you going to take?” Muhammad asked.

In a telephonic conversation with Israeli Prime Minister Benjamin Netanyahu, US President Joe Biden said Tel Aviv has the right to defend itself, which doesn’t sit well with Muhammad, who said that such narratives are a testament to how misinformed the West is about the issue.

“They need somebody to really step up and put an end to this. You can’t have the President of the United States saying, ‘Well, they (Israel) have a right to defend themselves from Hamas.’ When you say stuff like that, it puts it out there to the regular Joe Schmo that doesn’t really know what’s going on. I think the biggest thing with people is that they’re misinformed,” Muhammad said. “Not a lot of people know what’s really going on there. You don’t have the mainstream media really pushing the story of what’s happening and the history of it.”