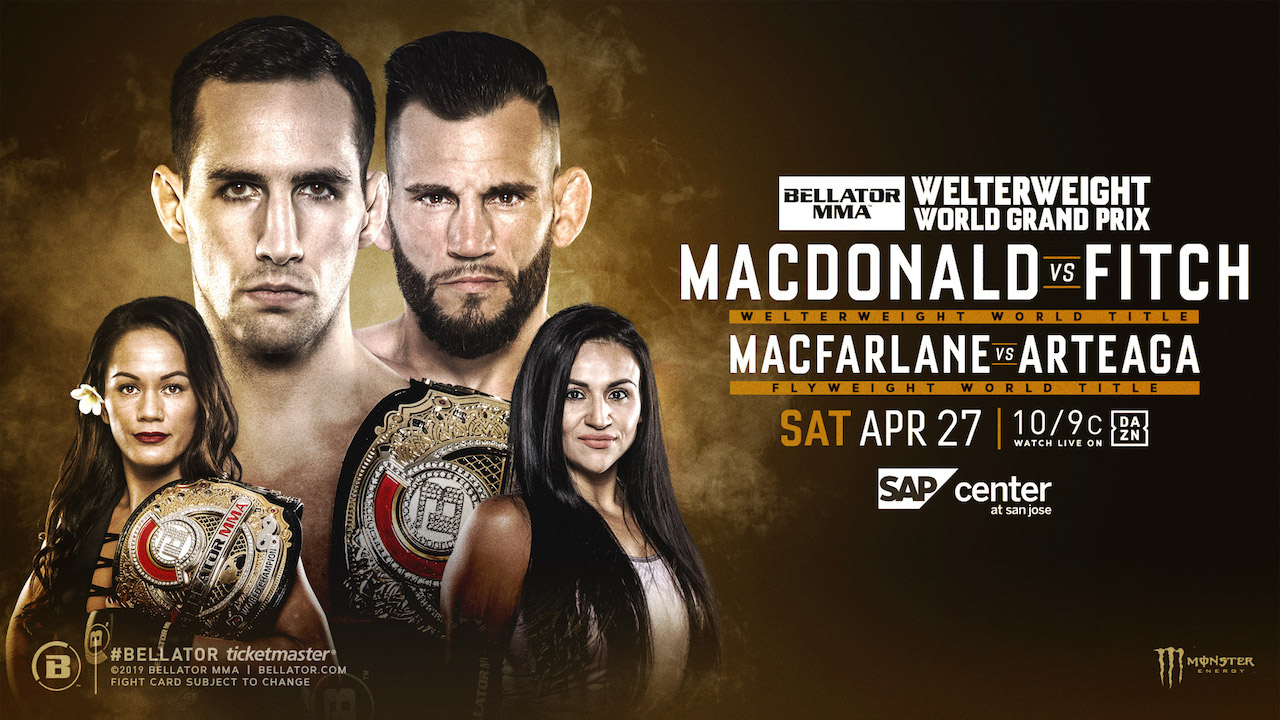 Bellator MMA returns to the SAP Center in San Jose in April, and the promotion has announced two title fights. Bellator welterweight champion, Rory MacDonald defends his title against Jon Fitch in the opening round of the Welterweight Grand Prix. In the co-main event, the women’s flyweight champion Ilima-Lei Macfarlane puts her title on the line against a resurgent Veta Arteaga.

The fourth and final opening round match-up in the Bellator Welterweight World Grand Prix will feature Bellator’s current welterweight champion Rory MacDonald (20-5) defending his title in the tournament against Jon Fitch (31-7-1, 1 NC) when Bellator returns to the Bay Area inside SAP Center at San Jose on Saturday, April 27.

In addition, undefeated Bellator flyweight champion Ilima-Lei Macfarlane(9-0) will return to action against Boise, Idaho’s Veta Arteaga(5-2) in the co-headliner. Additional bouts will be announced in the coming weeks.

Bellator: MacDonald vs. Fitch will stream live exclusively on DAZN, the fastest-growing sports streaming service in the world, at 10 p.m. ET/7 p.m. PT, while preliminary action will stream on Bellator.com and globally on the Bellator Mobile App.

Inarguably one of the greatest 170-pound fighters walking the planet, Rory MacDonald returns to the welterweight division following a once-in-a-lifetime “champion vs. champion” matchup against Gegard Mousasi in 2018. Now, “The Red King” sets his sights on one million dollars and clearing the landscape at welterweight, entering a tournament where he will defend his belt each and every time he steps inside the cage. First up for the British Columbia, Canada-native is Jon Fitch, a 40-fight veteran who has gone toe-to-toe with the some of the sport’s best, including Georges St-Pierre, B.J. Penn, Jake Shields and Paul Daley. Now, close to home, the AKA trained-fighter will have his first shot at Bellator gold.

Ilima-Lei Macfarlane closed out 2018 in style, remaining undefeated and defending her title in front of a sold-out Blaisdell Arena during Bellator’s debut in Hawaii. Finishing Valerie Letourneau via submission was the toughest test of the 28-year-old’s budding career, but now it’s back to business for the only flyweight champion in Bellator history, as she puts her belt on the line against Veta Arteaga in the co-main event. A native of Boise, Idaho, Arteaga has called Bellator home since 2016, when she made her promotional debut against Macfarlane’s Team Hurricane Awesome teammate Jackie Vandenburgh, a fight she won via unanimous decision. Now, after racking up three more victories, including wins against Bellator Kickboxing champion Denise Kielholtz and former flyweight title challenger Emily Ducote, 31-year-old Arteaga is ready for her opportunity to become champion.