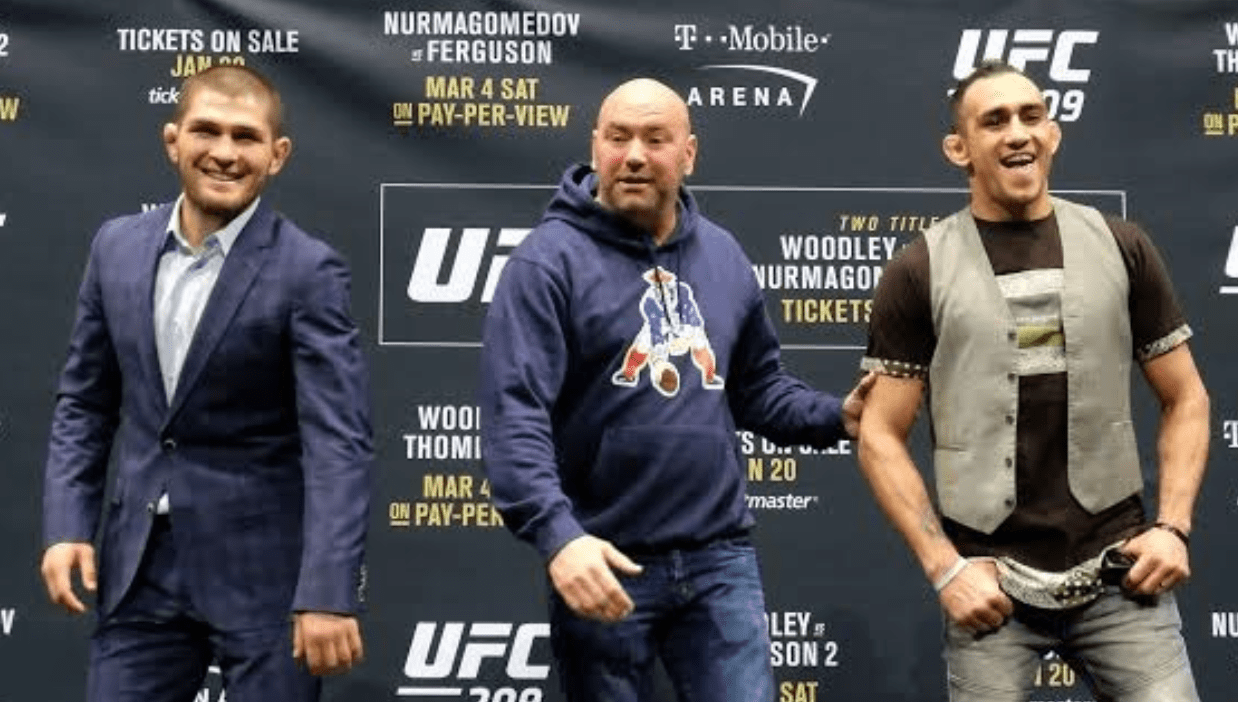 Despite the UFC cancelling their next three events, UFC 249 and its highly anticipated main event between Khabib Nurmagomedov and Tony Ferguson for the lightweight title, is still tentatively booked for April 18th. However, after the New York commission recently ruled out the Barclays Center in Brooklyn from holding the event, the UFC is currently looking for a new venue and location.

Ben Askren, despite having numerous disagreements with the UFC president in the past, supports Dana White’s decision to keep the Khabib vs. Ferguson fight on schedule at all costs. Speaking to Submission Radio (transcribed by MMA Fighting), ‘Funky’ laid out an idea as to how it can be done.

“The one thing I said last night was, let’s not get greedy, Dana, let’s make this really simple. All we need is Tony and Khabib, we don’t need an f’ing undercard. So, in America they’re doing ten people maximum, you can’t have more than ten people in a group,” Askren said. “So, you’ve got Tony, Khabib, three judges. But, you could also have the judges be remote. So, you don’t actually have to have them there. Your referee, you have Dana, you have Bruce Buffer and you have Joe Rogan maybe.

“Maybe we take the judges out and make the judges remote at a remote location and we give them each two coaches or something, or one coach. I think there’s a way to do it to keep it under ten people and broadcast it. It’s awesome. Please, please don’t cancel it.”

Khabib vs. Ferguson is one of the most heavily anticipated fights in UFC history. And for some very good reasons. Probably the biggest being that it has already been cancelled four times in the past. There’s also the fact that both men are on twelve fight win streaks inside the Octagon. And when you add the interest in the fight from the stylistic point of view, it really does tick all the boxes.

Like every UFC fan around the world, Askren is fascinated by the fight and the stylistic matchup between the two.

“I think it’s fascinating, that’s why it’s so exciting. It’s two guys who are really good at what they do, and if you were to design a fighter to beat the other person, that’s what you would design them to do, and so I think it’s gonna be really, really fascinating,” Askren said. “Khabib’s obviously gonna get takedowns, and he’s been so dominant with ground and pound, but at the same time, Tony is so active off his back and he’s good with the elbows and he’s got a lot of tricky stuff. I think it’s gonna be totally fascinating, I’m excited to see what happens.

“Tony’s a great fit, because he’s not gonna stay put on bottom. Tony can take a lot of damage, which, you know, Khabib will dish it out. Tony doesn’t get tired. and then Tony’s a high volume striker, he’s not a power puncher, which I don’t think is the right mix to beat Khabib, because I think you have to kind of fight him hard, stuff a few takedowns and volume strike him, and I think that’s how you’re gonna beat him, and that’s what Tony does. So, there’s a possibility.”

If Khabib Nurmagomedov vs. Tony Ferguson does go down at UFC 249, who do you think will walk away as the UFC lightweight champion?