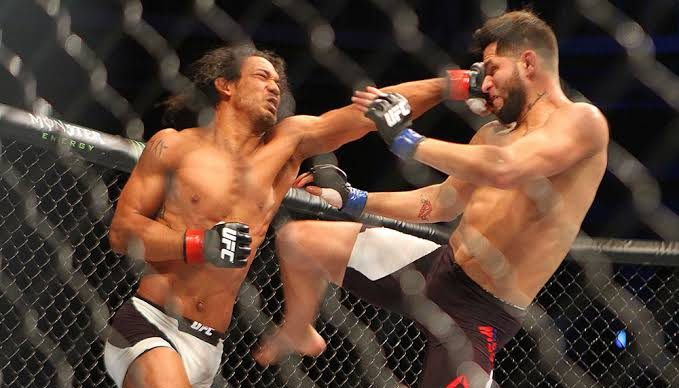 Benson Henderson won the WEC and the UFC Lightweight Championships, before he signed with Bellator MMA. ‘Bendo’ has also faced the two men who will headline UFC 244 this weekend, Jorge Masvidal and Nate Diaz.

Henderson knows the two men very well, and holds victories over the two fighters. Bendo defeated Nate for the lightweight title back in 2012, picking up a comfortable, sweeping unanimous decision win. He also faced Masvidal in South Korea in 2015 at welterweight, winning the close fight by split decision. And now, with his two former opponents going toe-to-toe this weekend, Benson Henderson analysed their match-up.

“I gave the fight edge to Jorge, but that being said, now I’ve had time to think about it and actually process it, I think that matchup-wise, I think it’s a good matchup for Nate’s style”, he told MMA Junkie. “I think Jorge is not going to move as much as he should – he’s just gonna stand there. For Nate to do well, he needs his opponent to just stand there in front of him and let him throw lots of punches. He does well when his punch count is really high. But if you’re not there and he can’t punch at you, his punch count goes down.”

Benson Henderson is currently scheduled to face Michael Chandler at Bellator Japan on December 29th. Bendo believes that if Jorge fights a smart fight, he will get his hand raised.

“I think Jorge will actually kinda stand there more for him because they both like to bang, they’re both gonna throw down – it’s gonna be a crazy fight”, he said. “It’s gonna be a great fight to watch. And if they stand there, I think Nate could do a little bit of a better job. But if Jorge uses his fight IQ, I think he won’t be there.

“He has the skill set – he can do it. But the question is, will he do it? Or will he be like, ‘I’m the baddest mother(expletive). We’re gonna stand here, and we’re gonna throw down.’ They could easily do that. If they do that, I’ll go with Nate. If Jorge uses his fight IQ, he has the skill set to beat Nate if he chooses to do so.”