Bruce Buffer Opens Up On His Life As The UFC Announcer 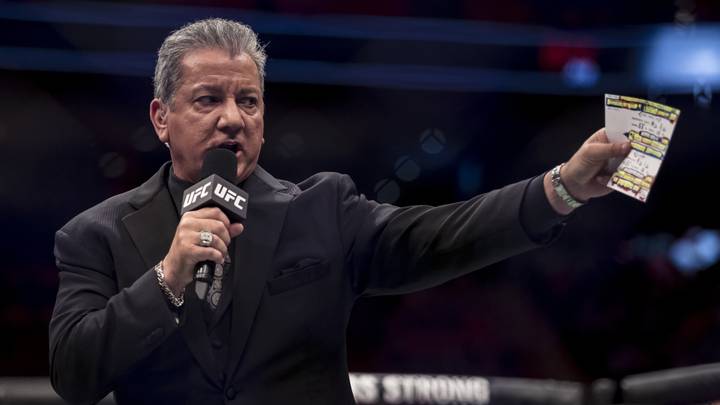 Bruce Buffer has been the voice of the UFC Octagon for almost 25 years. The 63-year-old, who is known for using popular catchphrases like ‘IT’S TIME’ in his UFC announcing, is a key member of the promotion.

Despite a hugely successful career, Buffer approached every event like he has to prove that he deserves his job. Speaking to BJPenn.com, ‘The Veteran Voice of the Octagon’ opened up on his job as a ring announcer.

“I always give 150 percent every time I walk into the Octagon. I’ve said it many times, every time I walk out on Saturday, those are the nights I have to prove I deserve the job.” Buffer said. “When I am there with no audiences with two great warriors in Stipe and DC, even when there are 50 thousand people in an arena, when the introduction happens it is just me and the fighter. Just enhance the moment.”

For ring announcers, their voice is their most valuable asset, so taking care of it extremely important. How Buffer does that is by being careful he doesn’t do anything to damage it.

“Don’t do anything to damage it. Don’t smoke, just take care of it like you take care of your body,” Buffer said. “My throat is my work tool so I just do the basics and don’t abuse it.”

It’s clear that Buffer loves his job. The veteran announcer said that he is in great shape and would like to continue for at least another ten years. That is good news for the UFC and the fans.

“I’m very humble about it all. I’m all about passion, everything I do is with a passion that is the reason why I announce the way I do,” Buffer said. “When that passion starts to fade, which is not my case, then yes that is the time I will probably announce it is my time to retire. But, I would say you are stuck with me for at least another ten years. I’m in great shape and stay in great shape. I’m lucky to do what I do.”

Apart from his usual job, Buffer has also recently stepped into the world of whiskey business with the new Puncher’s Chance Kentucky Straight Bourbon.

“I have been working on this for over a year, it is the finest bourbon on the market. I say that very strongly, there are other fine bourbons, this is a 60 dollar that will retail for 34 dollars. It will be in eight states to start and we will really blow it up next year. It is a very big project and I’m excited about it,” Buffer said. “We secured roughly 50 to 100,000 barrels of the Kentucky bourbon you can get. The bottles alone are four pounds, that is the quality of the glass.

Buffer was also asked about his favourite moment inside the Octagon, but responding by saying that there were too many of them for him to pick a single one.

“It is hard to pinpoint one. You think of UFC 100 and the introduction of Brock Lesnar. UFC 200 which was a historical moment for the UFC, Stephan Bonnar-Forrest Griffin which put the UFC back on the map. There are so many moments.”

Do you have a favourite Bruce Buffer moment inside the Octagon?