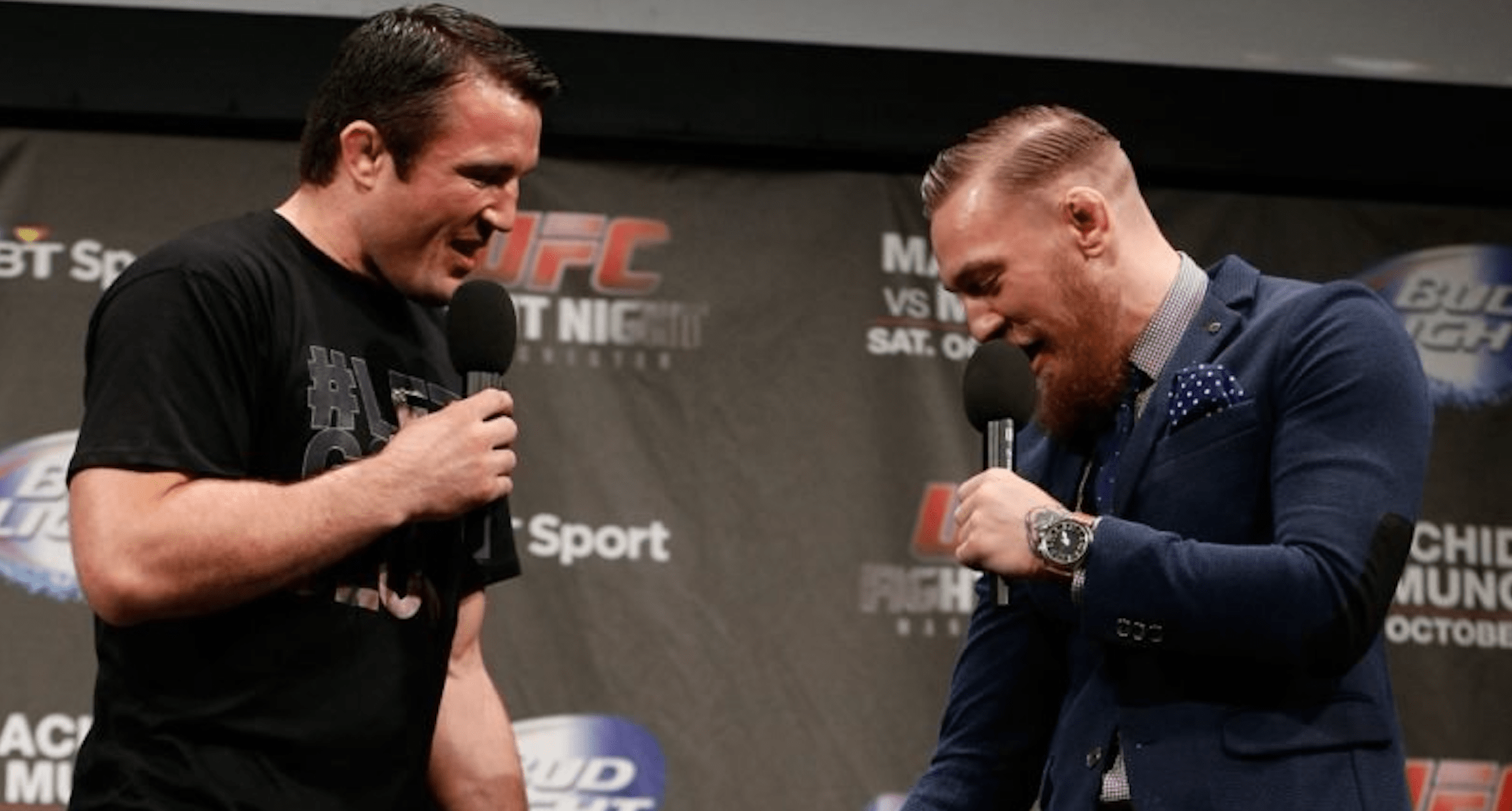 Chael Sonnen has revealed Conor McGregor’s key to victory in his rubber match with Dustin Poirier in the UFC 264 main event on July 10th.

McGregor and Poirier are tied at 1-1, with the former two-division champion needing less than two minutes to get the job done at UFC 178 in 2014, and ‘The Diamond’ taking his revenge in the rematch at UFC 257, earning a second round TKO.

The trilogy fight between the two has a lot on the line, as the winner will is likely to challenge the newly-crowned lightweight champion, Charles Oliveira. If McGregor wants to become a two-time lightweight champion, he will have to get past the division’s number one contender first, and Stephen Thompson believes he needs to move like a ‘karate’ guy again to do so.

Sonnen sees things differently however, as he believes McGregor needs to rattle Poirier in the lead-up to UFC 264, in order to get the job done in the T-Mobile Arena on July 10th.

The Importance Of Trash Talking

Speaking on his YouTube channel (as transcribed by Bloody Elbow), Sonnen said that as well as selling tickets and providing a psychological edge, trash-talking plays a key role in building self-belief.

“What’s really happening when a fighter’s talking trash is he’s building himself up,” Sonnen said. “That’s the part that isn’t seen. You think he’s out there trying to sell tickets or talk his way into opportunities or get into your opponent’s head. You’re not wrong, that’s a piece of it.

“But what’s really happening when you’re saying ‘I am the greatest, I am the best. No one can beat me, I am the greatest of all-time…’ And it goes in that order. You’ll slowly pick it up. You’ll start with, ‘I deserve main events. I can fight for a world championship. I can even beat this guy.’ You’ll keep going. And the reason that it goes in that order is because you, as the author of that statement, don’t believe it. You’re uncomfortable saying it. You don’t even feel right.”

Giving his own example, Sonnen explained how his brash persona brought about a change in his attitude.

“I remember where I was and what I was driving the first time I told a guy, who was a reporter, ‘I’m the greatest to have ever done it’,” Sonnen said. “And I remember after it left my mouth, I paused, waiting for him to either laugh or dispute it. And I remember when he didn’t. I remember thinking, ‘Why didn’t he dispute that? I’m not the greatest of all-time.’ And, so, I kept saying it. And slowly, I believed it. It became a real thing. I started training differently. It wasn’t just a mental approach. I started training differently.”

Instead of engaging in his trademark trash-talking in the lead-up to UFC 257, McGregor adopted a calm and composed approach during interviews and press conferences, complimenting Poirier on more than one occasion. While many were pleased to see a more mature version of ‘The Notorious’, Sonnen thinks it backfired on him.

“When Conor started the PR tour [for UFC 257], and he quit doing those things, he quit being brash, it wasn’t just a letdown for us fans that enjoy that commodity that Conor brings to the table, that enjoy the entertainment,” Sonnen said. “He also stopped putting that pressure on himself. And I’m not sure from a psychological standpoint that Conor understands that was the difference in the second Poirier fight. It was the approach.

“He got into the ring as though he was above Poirier. And I’m sure he felt that way. He’d already dusted Poirier. It wasn’t a close contest. At no part in that first fight was Conor ever in trouble. And it was a pretty short night. But it was also a meaningful difference whether Conor’s aware of it or not. Saying some of those things isn’t just good for ticket sales. Saying those things isn’t good just to get your opponent to second-guess it. Saying those things is what gets you ready to go out and act on it.

Sonnen went on to accuse McGregor of quitting at UFC 257, saying that the Irishman was essentially looking for an easy way out during the fight, after he found Poirier to be tougher than he expected.

“There was a day when Conor McGregor — whether it was true or not — never would admit that a calf kick hurt,” Poirier said. “I will never say those words to you. You kicked me in a soft muscle in the back of my leg and therefore I lost an ass-whooping contest? Whether it was true or not, you’d never get me to cop to it. And there was a time when you’d never get Conor to cop to it.

“Conor found himself in a fight that was harder than Conor thought it was going to be, against a guy whose ass Conor already whooped. Those are the things that started to play the mental game. That’s where Conor thought, ‘Land this big punch, let’s make it all look good, and let’s go home. I’ve got to get out of here.’ He went into panic mode. It’s one of these things where if you admit that ahead of time, that panic mode and that fear, that adversity that you deal with loses its power.”

Do you agree with Chael Sonnen’s thoughts on Conor McGregor?