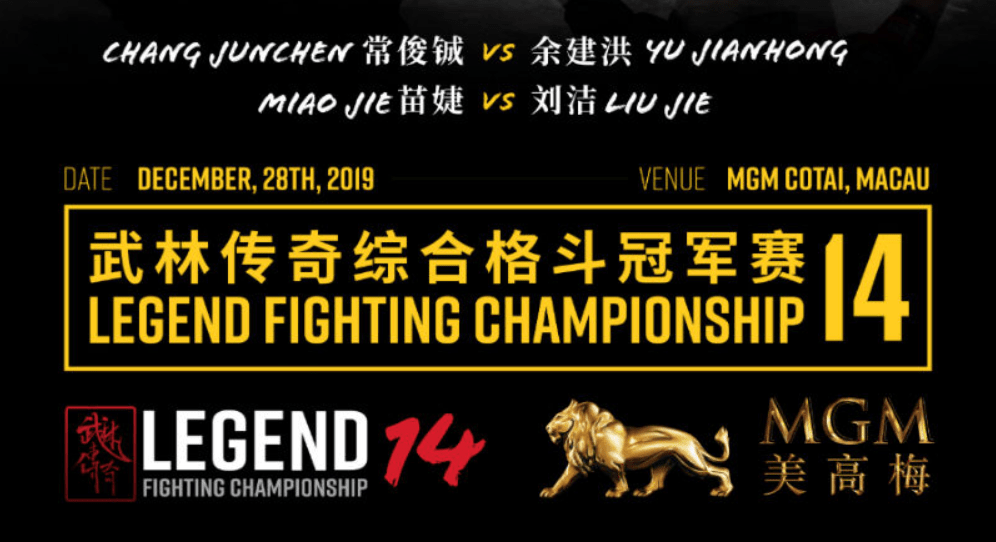 China’s globally recognised mixed martial arts organisation Legend Fighting Championship, returns to the MGM Cotai in Macau for its 14th event this December 28th. Legend 14 will be headlined by a rematch between two rising stars – Chang Juncheng and Yu Jianhong.

After a close split decision win against Chang Juncheng last September in the semi finals of the 4-man Sanda Tournament at Legend 13, Yu Jianhong looks to replicate the result, this time in a mixed martial arts match.

Chang will look to showcase the full power he possesses, which propelled him in his Legend FC debut, where he scored an impressive 30-second knockout victory. Yu also made his debut at Legend 12, where he lost in the Grand Finals to Yang Zhanwang in the 80-KG Sanda Tournament.

In the Legend 14 co-main event, Miao Jie meets Liu Jie in a 57-KG contest for the first ever female fixture in the Chinese promotion.

Miao will bring her world-class ground game highlighted by her Judo and Brazilian Jiu Jitsu black belts she earned. Meanwhile, the youthful Liu will strongly rely in her striking background.

Legend Fighting Championship Matthew Kwok, said that he was proud to have the fastest rising MMA stars in China on display at Legend 14.

“It’s been a landmark year for Legend FC and finishing up the year in Macau is significant for us in many ways. Chinese MMA continues to grow and we are proud to be in a unique position to showcase some of the fastest-rising stars of what is now a booming sport right across Mainland China.”