Coach Mark Sangiao: ‘Everyone Wants To Win But We Want It More’ 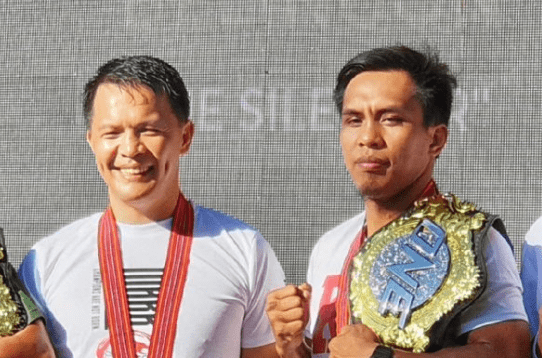 Grab Philippines celebrated National Heroes Day at the Mall of Asia Arena in Manila by inviting heroes from their partner ONE Championship as well as boxing legend Manny Pacquiao. Pacquiao was honored with a framed ONE Championship belt courtesy of ONE and presented by Team Lakay coach Mark Sangiao, Geje Eustaquio, Eduard Folayang, and ONE Strawweight World Champion Joshua Pacio.

After greeting the Grab Philippines community and gave a short speech, Sangiao shared some updates in regards to Kevin “The Silencer” Belingon. He said that Belingon nearing his peak, in time for his fourth meeting with Bibiano “The Flash” Fernandes at ONE: CENTURY on October 13th for the ONE Bantamweight World Title at the Ryogoku Kokugikan, Tokyo.

“Kevin has not yet reached his full potential but he is closing the gap each day in training,” Sangiao said.

“I believe that at his age, he continues to grow as a mixed martial artist. Bibiano, on the other hand, showed some signs of slowing down, especially in the third round of their last match. If the bout continued, Kevin might have won and retained the title.”

Belingon is known for his explosive performances and aggressiveness in every match he partakes in. Coach Mark said he is not limiting Belingon but cautioned him, reminding him to always be on his toes for counter-attacks like a submission or a haymaker that will knock him out.

“Kevin has always been aggressive in all his matches but he also learned from his past mistakes,” Sangiao said.

“He is physically fit and in his best condition right now that will play a huge role in Japan. What we’re doing right now is to make sure that his energy and explosiveness in the first round will be consistent until the fifth one. We want a decisive finish of course but we are not taking any chances, so we are all serious during training.”

Belingon and Fernandes first met back in 2016 where the Brazilian successfully defended his title by way of kimura submission.

The Team Lakay stalwart then worked his way back up to the title contention in 2018, where he found the success that eventually crowned him as the new champion in their second meeting. It was at ONE: A NEW ERA in Tokyo, Japan where the event was supposed to crown the undisputed bantamweight champion. Sadly, the Filipino surrendered the title after being disqualified when he accidentally landed illegal blows.

“The Silencer” has taken these losses as lessons learned and added motivation to reclaim his title in the final match where the winner takes all.

“This fourth meeting between Kevin and Bibiano is huge for both athletes,” Sangiao concluded.

“We are confident that Kevin is ready to take back his title and his preparations in training is proof of that. Everyone wants to win but we want it more than anyone else.”