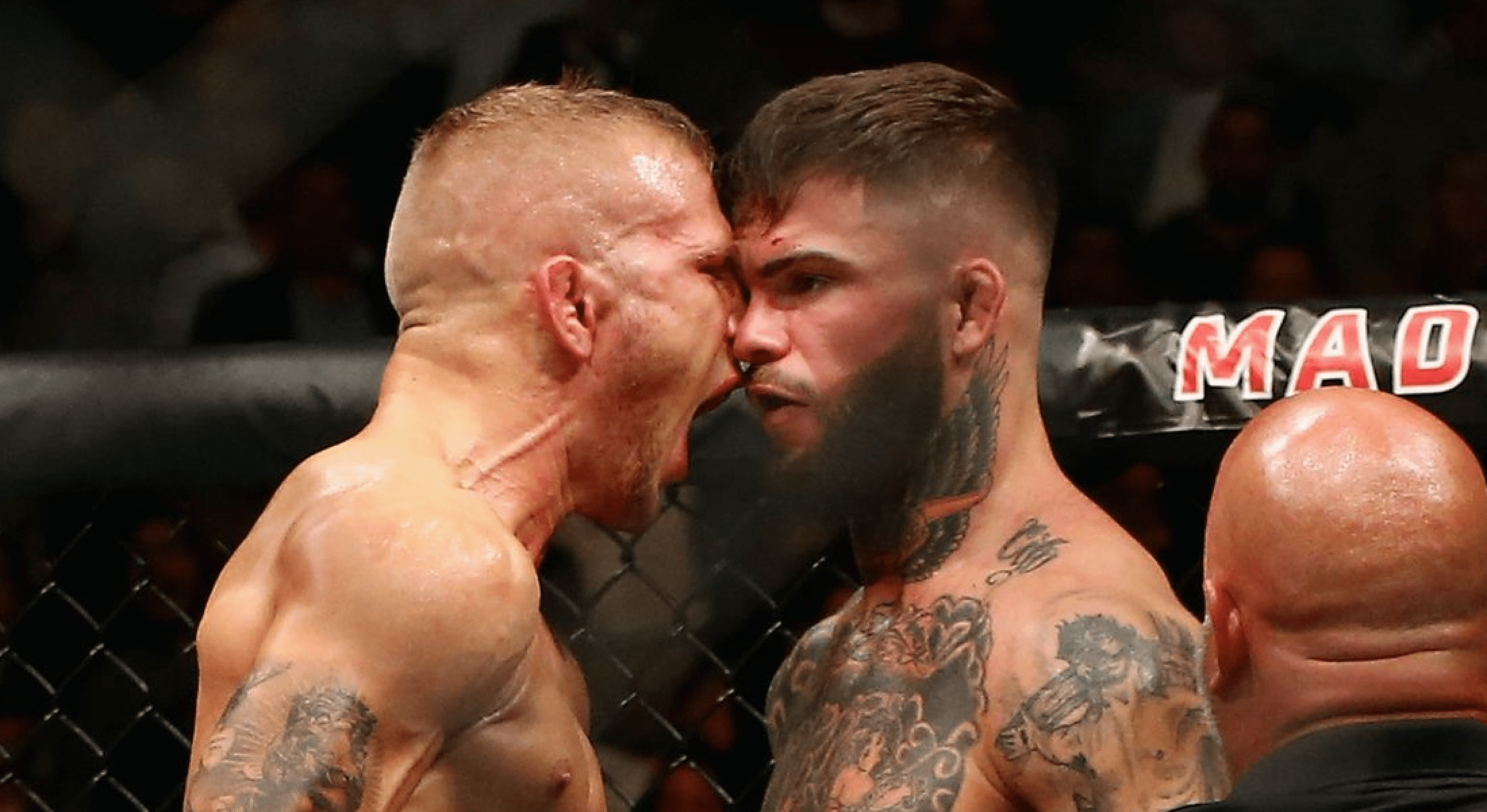 Cody Garbrandt believes he has no one to blame but himself for the defeats he suffered at the hands of TJ Dillashaw.

Garbrandt lost his UFC bantamweight title to Dillashaw at UFC 217 after getting finished in the second round. He was then awarded an immediate rematch at UFC 227, but this time was TKO’d in the first round. ‘No Love’ went on to lose a third-consecutive time against Pedro Munhoz at UFC 235, where he was knocked out in the first round.

Before his first fight with Dillashaw, Garbrandt was undefeated and the man to beat in the UFC bantamweight division, having come off a spectacular unanimous decision victory over Dominick Cruz at UFC 207 to win the title.

Speaking on ‘The Joe Rogan Experience’ podcast (as transcribed by MMA Fighting), Garbrandt said that he wasn’t mentally and physically ready to fight Dillashaw, and rushing back from injury at UFC 217 cost him dearly.

“Definitely and that’s not me,” Garbrandt said. “So for me to go in there and have that, just an example of (makes an angry face). I don’t need to do that. It was great, I was a world champion, I feel like I needed to defend it, a lot of other stuff, the backstory of it, the injury coming off a year. I was just so not mentally ready to go in there and fight that I physically overcompensated for it.”

Garbrandt lost both of his fights against Dillashaw in a similar fashion, as he indulged in a wild phone booth exchange of blows. But while the defeats were a bitter pill to swallow, the 29 year old considers them as a blessing in disguise now, as he feels hungrier than ever.

“I feel like TJ caught me at a time where mentally I was not in the best state of mind to go in there and be a champion and that’s why it was taken from me,” Garbrandt revealed. “He capitalised and I look back on it, I kept going back to those fights, and it’s a little bit of insanity.

“You have to be insane to repeat the same thing expecting a different outcome and that’s what I was doing… Looking back, hindsight is 2020 always in a fight, but I’m thankful for that. I feel like if I would have went off and defended the title, I probably wouldn’t have been as hungry and motivated as I am today and that’s going to help me out for the next five years of my career or however long I’m going to fight for.”

While Garbrandt blames no one but himself for his three back-to-back losses, he believes that he has grown as a fighter since then.

“Staying enthusiastic, I think that’s the main thing,” Garbrandt said. “I wasn’t enthusiastic. I felt like I was just going through the motions. There’s a lot of other things, a lot things can transpire but I’m solely putting blame on myself because that’s all I can control. What I do, how I react to things, and I wasn’t the person that I am during those kinds of tribulations in my life. I’ve grown from that. I was 24-25 years old. I’m 29 years old now. I look at the game differently.”

After spending two years on the sidelines due to a doping suspension, Dillashaw is planning to make his return to the Octagon in the coming months. Should they run it back, Garbrandt believes that there’s nothing the 35 year old could do to beat him if he’s focused.

“It’s not to say I didn’t like TJ, I don’t agree with a lot of the things that happened but that’s so far in the past, I’m past that,” Garbrandt noted. “But definitely, taking that in there, my mental state was not what it should have been to go against a guy like TJ. We can fast forward to when he got popped and this and that, TJ can be on that stuff.

“He can be on that stuff and he still can’t beat me when I’m focused and I’m mentally there and I’m in there and I’m excited. I’m glad that he’s coming back. He’s got to prove to himself and that’s a big fight for me to come back to in the future. That’s gonna happen.”

Would you be interested in a trilogy fight between Cody Garbrandt and TJ Dillashaw?