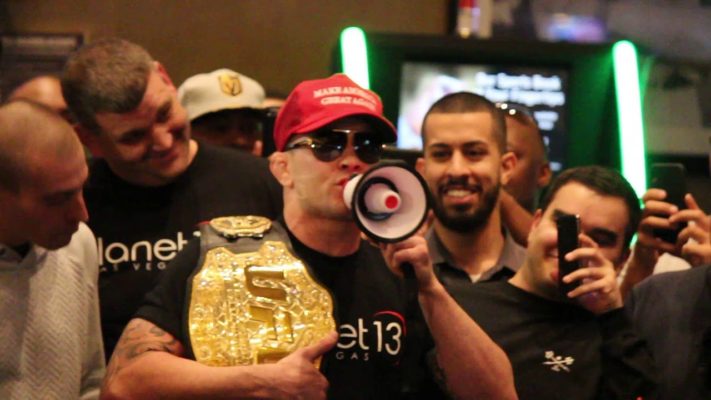 Colby Covington is set to challenge Kamaru Usman for the UFC welterweight title at UFC 245. And it’s safe to say that should he win the belt, he won’t be celebrating with UFC president Dana White, or his former best friend, Jorge Masvidal.

Colby and Dana have had a rocky relationship over the last couple of years. After Kamaru Usman was given the title shot over Covington at UFC 235, ‘Chaos’ hit out at Dana and the UFC at every opportunity, threatening to take legal action and saying he may never fight again. He even confronted the UFC boss on camera in a Las Vegas casino.

After UFC 235, when Dana confirmed that Covington would challenge Usman next, there appeared to be a truce. But after Dana hit back at Colby last month, over his claims that his initial title fight with Usman at UFC 244 broke down because of the UFC’s ‘bully tactics’, Covington has since gone back on the attack.

Speaking to Submission Radio, (as transcribed by MMA Fighting), Covington went as far as to say that if Dana tries to wrap the belt around his waist at UFC 245, he’s going to ‘slap him in the face with it’.

”So, you’re gonna be calling me after December 14th begging to get me back in there. And if you don’t come right next time, you know, I don’t need to fight again, man. I already have enough money in my bank account where I don’t have to ever fight or do anything ever again. I’m making multi six-figure sponsors from Bang Energy, from a CBD company, from a betting website. So, I’m making more money in sponsors than Marty Fakenewsman’s gonna make in this fight.”

Covington went on to say that the difference between him and Dana, is that he speaks the truth, while Dana tells lies.

”It’s just so funny to make him look stupid and make him look silly. First off, his narrative was, ‘He’s ducking fights.’ Oh yeah, that’s why I took a fight with Robbie Lawler on three weeks’ notice and I didn’t even train for it because I had a cut and I saved your show – your desperate ESPN show that needed the ratings and needed someone to show up and save the day. I did that for you. Now I’m showing up in an undisputed title fight three months later.

”So, everything he says, it’s never truthful, and just like the president [Donald Trump] says, truth is a force of nature. And I operate in truth and he operates in lies. So, there’s a difference between me and Dana White, and that’s truth and lies. Honestly, I don’t care what he says. He has a lot to say all the time, and I don’t pay attention to him anymore. I don’t follow him on any social media platform, so I could give a s*** less what he has to say. I’m showing up, I’m kicking ass, I’m taking names and I’m cashing the biggest checks in the sport, and that’s that. There’s not a man alive that can stop me right now.

”Dana White needs to get his brain checked because he might have CTE if he’s making up lies like that.”

It wasn’t just his boss who Covington hit out at. He also took aim at his former close friend, Jorge Masvidal. ‘Chaos’ also accused ‘Gamebred’ of lying and said he’s never lost a single second of any type of sparring with his former friend (as transcribed by The Mac Life).

“To be honest, he’s never won one second of any type of rounds we’ve ever trained together. And he knows that deep down inside. So he’s just looking for something to promote a future fight. We may have to fight each other. Former best friends turned foes. And that’s how this sport is. There’s no sports, there’s no friends in this type of sport.

“It’s an individual sport and it’s business, so we had to part our friendship. And he’s making up lies, man, he’s trying to say that I owe his coach money. And I can show you the receipts. I’ll go get the receipts right now and show you. I overpaid him if anything. The only percentage that I owe is to American Top Team. I pay them five percent every fight, and that’s the only people I have to pay. I have no obligation to pay any other coaches. All the other coaches that I pay is on me if I want to pay them or not, and I always paid his coach, man. I gave him five to ten grand per fight, and I have the receipts too. So, you know, he’s lying, man. He has nothing else to say.”

With both men training at American Top Team, there has been a concern that a fight could break out in the gym. Covington however, has no interest in fighting the ‘Miami little street thug’ Masvidal, unless he’s getting paid to do so.

“We were pushing each other in the gym. We’d yell in the gym, hey, who’s gonna be the first fighter to get a million-dollar fight, this a that. We were competing to push each other to these great limits, and here we are now, and now we have to act like kids? I mean, I’m not acting like a kid, he’s acting like a kid. But here we are, and you can’t be professional and understand this game? Yeah, it’s business and we’re not gonna be friends, we’re gonna have to fight each other.

“But it is what it is, man. Just grow up and lets’ not play these childish games where you’re making up lies and you’re saying stupid stuff that isn’t true, let’s just be honest and call things the way they are, call a spade a spade. But apparently that’s hard for him. He’s a Miami little street thug.”