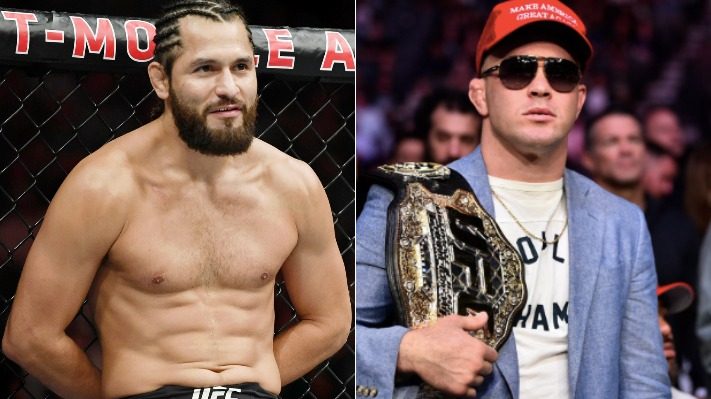 There was a time when Colby Covington and Jorge Masvidal were brothers, inside and outside the gym. However, they now find themselves on opposing sides. Covington is a former interim champion, and believes he deserves to fight for the welterweight title. Jorge on the other hand is coming off an incredible five second KO win. Many now believe that Masvidal deserves to get a crack at Kamaru Usman.

Colby Covington was tipped to face Kamaru next. However, “Chaos” will be facing former champion Robbie Lawler this weekend at UFC Newark. While Colby isn’t thrilled to be facing someone who has slipped below in the rankings, he recently told MMA Junkie that he should be the one fighting for the title next.

“We are one of the greatest duos in MMA history”, Colby Covington told MMA Junkie recently. “We’re the Batman and Robin of MMA right now. Of course, I’m Batman, and he’s Robin, but it’s a dynamic duo, and we’re doing great things in the sport. But he’s going to sit back while I get my undisputed title shot.”

“Look at his resume; look at mine. He’s on a two-fight win streak”, Colby further explained. “He’s 2-2 in his last four fights, so you’re going to give a 50-50 fighter a title shot? That doesn’t really make a lot of sense.”

Covington’s comments come after ATT’s Dan Lambert revealed that the two fighters aren’t training with each other anymore. As things stand, there may come a time when Jorge and Colby Covington might have to fight each other. And the duo are prepared to go their separate ways while still remaining friends, if that ever happens.