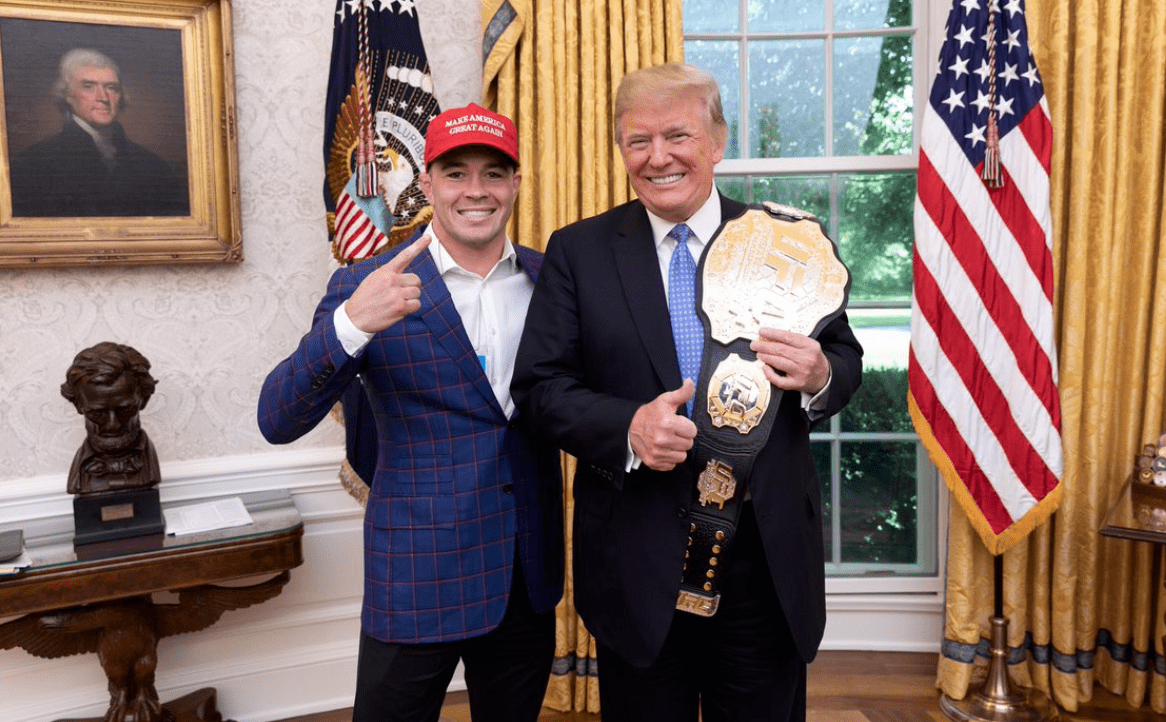 From all the Colby Covington headlines in the lead up to UFC 235 last weekend, you could have been fooled into thinking that he was fighting in the main event. From crashing Kamaru Usman’s Open Workout to ambushing UFC President Dana White to coming to blows with Usman and his team the day after fight night.

Whether you like him or not, everyone has been talking about Covington the last couple of weeks. Speaking to Bloody Elbow, ‘Chaos’ discussed some of the men he’s shared the headlines with over the last fortnight. Starting with the former UFC welterweight champion, Tyron Woodley.

“His career is over. He’s made all his money, he’s cashed out, he’s not a real fighter anymore. He doesn’t want to be here to make his division great again like myself. That was already a broken man (in the cage against Usman).

“He’s not the type of guy when things get tough he’s gonna come back stronger. He’s not resilient; something bad comes to him, he doesn’t know how to fight back.

“Obviously, I’m the biggest draw in this division, I’m the real world champion, and I’m gonna fight for the title next. It’s gonna be me and Snoozeman, and Woodley’s the odd man out.”

When Covington and Usman and his team came to blows in the Palms Hotel, the day after UFC 235, Usman’s manager Ali Abdelaziz was seen on camera throwing a punch at Covington. So as you can imagine, the number one welterweight contender didn’t speak too highly of him either.

“MMA managers are meant to be behind the scenes. They’re not meant to be up in fighters’ faces acting like they’re tough. He was up in my face, ‘Let’s fight, let’s take this outside.’ I’m like, ‘Dude, you’re not even a fighter. I’ll dust you in a second. You’re conducting yourself like a little kid. You’re a manager, you’re supposed to be representing your fighters, and this is how you represent your fighters? You go out there and put innocent people and children in harm’s way?’

“Ali is a little terrorist rat. He’s just mad that I had cat-like reflexes in the Palms buffet when he tried to sucker punch around a bunch of pregnant ladies and a bunch of kids. I don’t really give a f*** what Ali wants. He doesn’t run the UFC, he’s not the matchmaker, he doesn’t do s***. He can sit down like a little bitch and watch me end his hype train in Marty Snoozeman.”

One man who Covington no longer hates, is Dana White. After all the bad mouthing towards the boss, Covington now says that the two are on great terms.

“We were on bad terms last week, but all I needed was a chance — an opportunity to talk to him, get face-to-face, let him know what’s going on, let him hear my side, and let me hear his side. We’re on great terms right now.

“A lot of people can relate to me, because everybody has a job where they hate their boss, and they work for their boss, and he’s a piece of s***. That’s why a lot of people can relate to me in my situation. But you don’t hear me complaining over here. Yeah, I got passed over for a title shot when I was number one in the world and I had a belt and I did something nobody has ever done — and that’s go to the White House and hang out with the sitting president, Donald Trump — but I’m not gonna complain about it. I’m not gonna make excuses about it. I just get back to work and I just keep being thankful and blessed to be able to live this American dream.”