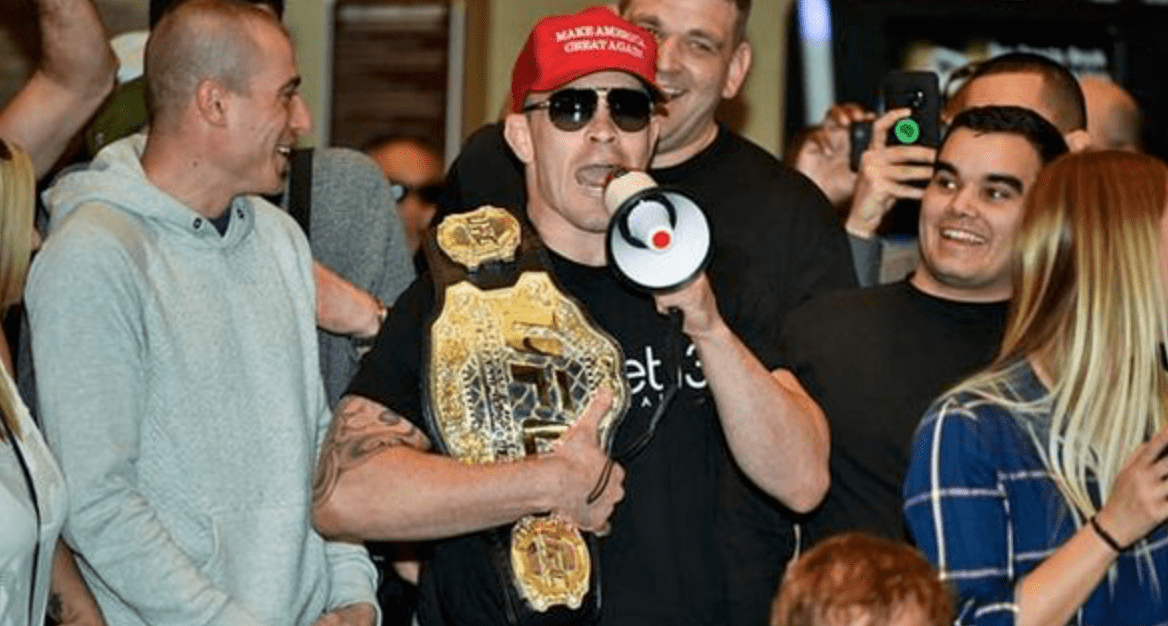 The former UFC interim welterweight champion Colby Covington has a knack for delivering outlandish promos in his interviews. And this could come in handy as he is interested in joining the pro wrestling scene someday.

Although the entire sporting world has come to an abrupt halt as a result of the coronavirus pandemic, the WWE have been putting on shows at their Performance Center without any hesitation. As well as RAW and SmackDown, last week they aired their annual blockbuster event, ‘Wrestlemania’.

Speaking on the What the Heck show (as transcribed by MMA Fighting), Covington expressed his respect towards pro wrestlers and his desire to join the premier pro wrestling organisation ‘WWE’, someday.

“Those guys are true sports athlete entertainers,” Covington said. “To put on a show like that for the world while everybody’s at home watching, you don’t have the same energy from the crowd and the same adrenaline that you get when you walk into a full arena, so to see those guys out there putting it all on the line, I respect those guys. Those guys are some of the hardest workers on earth. I hope to join them someday. I’ve got a lot of love and respect for Vince McMahon and what he’s done for the business model of the WWE.

“My thing is I want to go to WWE and make wrestling real again. I want people to get behind it and think that it’s real. You ain’t going off the top rope on me because I’ll take you out with a double leg, you ain’t gonna get up there. So I’m looking to go over to WWE and make wrestling real again in the near future. Until then I’m gonna be retiring all the old fogeys over here in the UFC.”

Covington is not a stranger to the squared circle as he has appeared in shows for the Impact Wrestling promotion, alongside the American Top Team owner Dan Lambert and a few of his ATT teammates, back in 2017.

Covington has become quite the controversial character in the last few years by fully embracing the ‘Heel’ persona, with his outlandish quotes.

This persona he has built might be credited to the relationships he has had with pro wrestlers over the years.

“I’ve been talking to Bobby Lashley, my friend, he’s a teammate, and Kurt Angle obviously, I walk out to his music for my fights, I keep in good touch with those guys,” Covington said.

“And Ronda Rousey, the greatest women’s mixed martial artist of all time. It’s good to learn from her and see her and how she’s handling the transition from MMA to pro wrestling. I think I’m gonna have a good grasp of it. I grew up amateur wrestling and I know how to act, I know how to sell, and everybody knows I know how to entertain so I think it’s gonna be a smooth transition when I go to the WWE in 2021.”

Over the years we have seen MMA fighters, such as Ronda Rousey and Ken Shamrock transition into pro wrestling. As well as wrestlers like Brock Lesnar and Kazushi Sakuraba move into MMA and have success in both industries. While expecting to make his WWE debut next year, Covington believes he has what it takes to become a WWE superstar.

“I would say probably 2021,” Covington said. “Next summer, not this summer, but next summer. I’ve been practicing moves and really working on my promo and mic skills and just control and slowing things down and understanding the art of wrestling. I want to make sure when I go there I make the biggest splash possible because I’m not here for a long time, I’m here for a good time and I’m not here to make friends, I’m here to make money. When I go over there I want to make Brink’s trucks loads of money.

“Everybody knows I do good business, I pull numbers, people want to see me, I’m entertaining, and people are divided on me. They hate me and they love me, but it’s all the same thing at the end of the day.”

Covington was last seen inside the Octagon last December, as he headlined UFC 245 against Kamaru Usman for the UFC welterweight championship. The fight was a barn burner and managed to win fight of the night honours. Although ‘Chaos’ fell short of capturing the belt, he was definitely the centre attraction in the main event.

Do you think we’ll see Colby ‘Chaos’ Covington become a superstar at WWE?