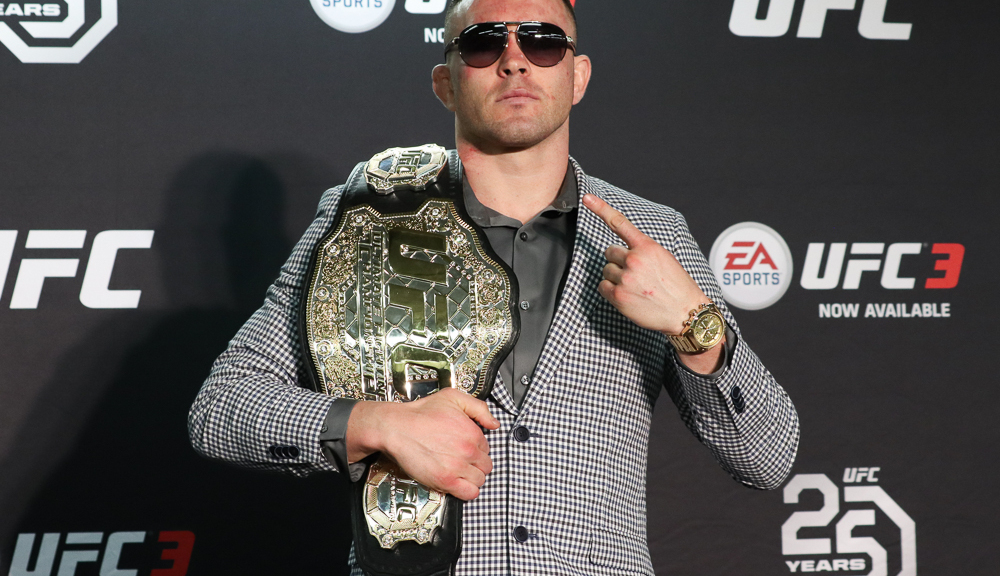 Colby Covington is a man on a mission. The former UFC interim welterweight champion feels like the carpet was pulled from under his feet. Dana White made it clear just over 12 months ago that Tyron Woodley’s first fight after returning from surgery would be against Covington. However, here we are, with Woodley set to face Usman at UFC 235, while Colby has been stripped off the title.

In recent weeks, Colby and Dana White have gone back and forth. Covington has had some unflattering remarks for Dana, and asked the promoter to release him from his contract. White however, took all of that in stride, and said Colby wasn’t going anywhere. Now, the former interim champion wants to make life difficult for the promotion.

“We may have to go to court, and this may be a lawsuit”, Colby told MMA Junkie. “Because let’s be honest: If [Tom] Brady wins the AFC championship and all of a sudden Roger Goodell says, ‘You’re not going to the Super Bowl because we don’t like you’ – no, that’s not how it works. This is business and just because you don’t like someone, that’s not a big deal. This is business and they’re gonna have to get over the fact that they don’t like me and they’re gonna have to play ball and do business with me.”

“If the UFC wants to be a circus and be a corrupt business and go about their business, then that’s their problem”, Colby retaliated. “I’m standing up for what I believe in. I’m not backing down. I don’t care what Uncle Fester has to say. I’m the No. 1 ranked fighter in the world. Go look it up on the UFC website. I had a belt wrapped around my waist by Uncle Fester. I was the only fighter to go the White House. That’s never happened. What else do you have to do? What’s the criteria to get a title shot these days?”

It was earlier reported that the UFC wanted Colby to first fight Usman, with the winner facing Woodley at UFC 235. However, Colby wasn’t interested in fighting for second place, just to earn an opportunity he was promised to begin with.

“[Other fights] are possibilities but they want me to go backwards and fight for a fifth of the paycheck they promised me. That ain’t happening. I’m not fighting for a fifth of the paycheck that I was promised and that I’m owed and guaranteed and earned. They’re not gonna get anything less out of me. I’ll sit on the shelf all day. We’ll go to court. I’ll make it a living hell for the UFC. I don’t give a sh*t. They’re already trying to make my life a living hell. The business they’re trying to do right now is ridiculous. It doesn’t make sense.”

Colby Covington also said the UFC knew his worth, and wouldn’t want to burn bridges by going to court to fight him.

“They know how valuable I am”, Covington revealed. “They know I am the biggest draw in the welterweight division and soon to be the biggest draw in the sport. They can’t stop my progression and my growth. I’m getting better every day. I’m 30 years young. Every time I step in the gym at American Top Team I’m getting better, I grow, I mature every single day. You haven’t seen the best of me yet, and they can’t keep me down. They can delay me, but they cannot deny me.”