Conor McGregor Will Be ‘Scouting’ At UFC 249 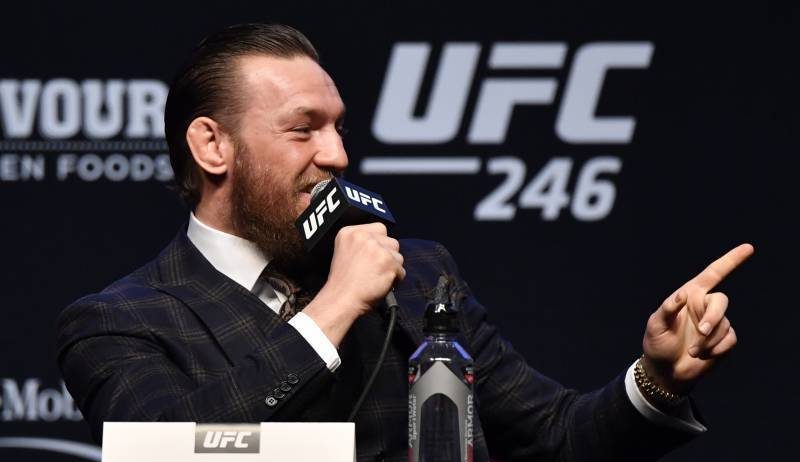 Conor McGregor confirmed last week that he is fighting fit but remains stuck in Ireland amid the coronavirus lockdown.

In an interview with ESPN, Conor’s manager Audie Attar, said that ‘The Notorious’ will be watching UFC 249 closely. However, it’s not only the fighters that McGregor is interested in. The former two-time UFC champion will also be observing the precautions put in place for fighter safety.

“Conor is very curious to see whether the health and safety of the athletes and staff are ensured. He wants to make sure everyone is taken care of properly,” Attar said.

“While Conor’s desire would be to fight in front of another sold-out crowd, he does understand what him fighting in an empty arena could do for people at home and would consider if he is comfortable with the way the UFC is holding these events from a health and safety standpoint.”

McGregor has shown an interest in fighting on Dana White’s Fight Island. However, in the current circumstances, this appears unlikely. Dana revealed that he may lose too much money, allowing the him to fight without any fans in attendance.

“Is there any level of fight that I wouldn’t give up the gate on? It’s tough to give up on a Conor McGregor gate. It’s tough to do,” Dana said.

“I talked to [McGregor] yesterday, and he wants to fight. He’s excited about tomorrow, too. He was like, ‘This is so awesome. Good luck tomorrow. I hope this goes off well.’ He doesn’t like the idea of fighting without a crowd, either, but he wants to fight. I don’t know. We’ll have to see how this thing plays out.

“You do a Conor McGregor fight in the right place, you can do an $18 million gate. That’s a big number to give up.”

Wherever and whenever the fiery Irishman does fight next, could it be a rematch with Dustin Poirier. McGregor has taken to social media to hit out at the current UFC rankings, which have ‘The Diamond’ once place ahead of him. Conor has since deleted the tweet but not before MMA Fighting captured a screenshot.

McGregor scored a first round knockout of Poirier six years ago at UFC 178, in a featherweight contest. Dustin took to Twitter himself to hit back at Conor. Although he didn’t delete his tweet.

Not content with hitting out at the UFC rankings, McGregor also found time to accept Oscar De La Hoya’s recent call out.

Who do you think Conor McGregor will fight next?