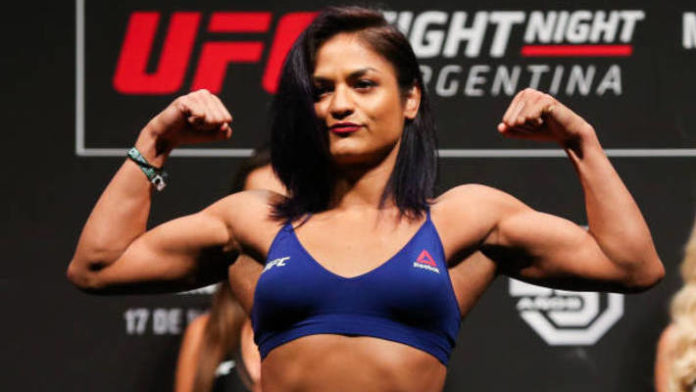 Cynthia Calvillo was originally scheduled to fight Claudia Gadelha in a pivotal strawweight clash at UFC on ESPN 7 in December, but with Gadelha injuring her foot, it was reported that she will now face Marina Rodriguez instead. Calvillo is coming off back-to-back wins after a lone stumble against former strawweight champion Carla Esparza, and told the media including Asian Persuasion MMA that she found about Claudia only on Wednesday.

“Honestly, I think it’s going to be just as tough of a fight”, Calvillo told the media during the Media Day for UFC Singapore. “She is ranked at I think number nine or number ten. Claudia is definitely one of the most seasoned veterans and I was expecting to fight her. I was really looking forward to fighting her, but also know Marina is a very dangerous fighter. She’s 12-0, is it’s going to be nice because that 0’s got to go, and I’m going to give it to her.

“So I’m really excited about that. I’ve been training really hard. I know her style is Thai, I know her base. So I’m at the perfect place (TMT) to train, right? Tiger Muay Thai, so it’s a great match-up. I’m really looking forward to it.”

Cynthia (8-1 MMA) also said that she came to know about Claudia’s injury on Wednesday, and was given a couple of names from which she chose Marina Rodriguez.

“Right when I woke up in the morning (Wednesday), I see the news and I see people tagging me, and I see that she’s able to fight. I hope she has a good recovery, she’s a beast. She wouldn’t turn down fights for any means. I was really looking forward to fighting her because she has always been a top contender. She has always been close too fighting for the world title.

“It would have meant a lot for me to fight her. So hopefully in the future, I’m able to fight her. I wish her the best in recovering from all of her injuries. I myself am no injury slug. I was supposed to fight in Sacramento earlier in July and I fractured my foot. So I know how that goes.”

Calvillo earlier used to train at Team Alpha Male with her mentor Urijah Faber. However, she switched camps earlier this year, and currently trains out of Tiger Muay Thai in Thailand. She told us that she had to change camps because that was what was best for her.

“It’s always good to change it up a little bit. For me, I think I had my time there at Team Alpha Male. I’m super grateful for training there, I got to learn a lot there. It’s a big part of what my UFC career was.

I just think with Thailand, it’s a breath of fresh air, and I get to train with a lot of other high level partners. But I’m super thankful for (TAM). That’s why I love martial arts. You’re always able to find new places. You can never learn enough. There’s always something to learn. So that’s made want to make the transition to Thailand from TAM.”

She also said that she felt it was time to move from TAM to a different gym.

“Yeah, there were just a lot of changes and it was time for me to move on. I think every fighter has to make those changes. Of course, I would love to have all my original coaches that can take me because I’m a very loyal person. Whoever starts with me, I want them to end up with me.

It is what it is. I think that the team went through a lot of changes itself, and it was just time for me to move on.”