Dan Hardy Opens Up On Fall Out With UFC 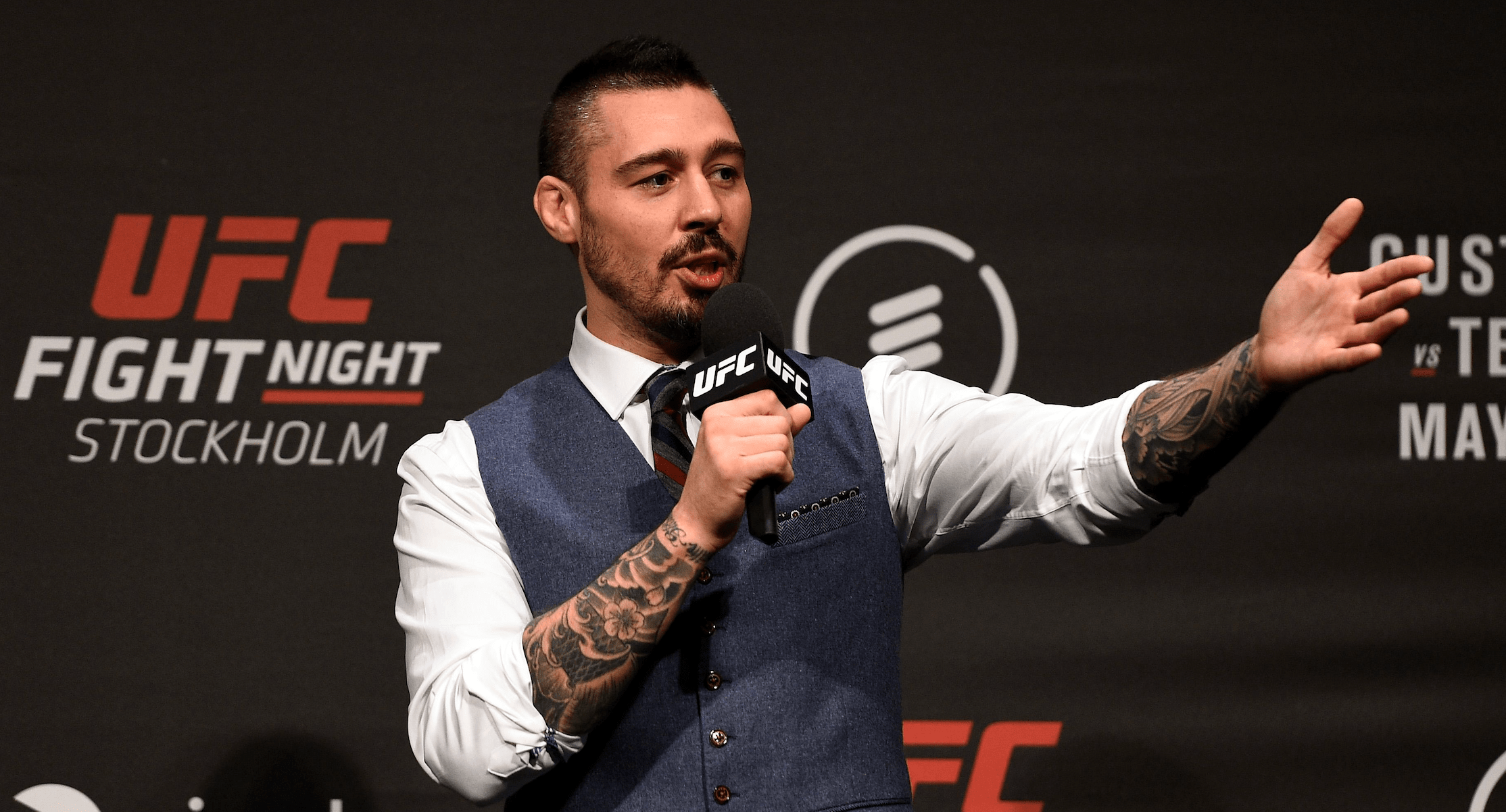 After being relieved from his duties as a commentator and analyst with the UFC earlier this year, Dan Hardy was also released from his fighter contract with the promotion last week.

In an email sent to Hardy, which he read while speaking to MMA Fighting, the UFC confirmed his release, thanking him for his contributions to the company over the years.

“With your accomplishments both in and out of the Octagon, you’ve contributed to shaping the sport of mixed martial arts into what it is today while also being a global ambassador for the sport,” the email read. “We wish you nothing but the best of luck and much success going forward with all your future endeavours, and thank you for your dedication to the sport of mixed martial arts and the UFC.”

Although he himself had requested the UFC to release him, Hardy said that parting ways with the promotion after 13 years felt strange, especially under the circumstances that led to it.

“I’d always got this perception that my career within MMA would come to an end, and it would end with the UFC,” Hardy said. “I never intended on fighting past a UFC contract. When I was on that four-fight losing streak, and I was considering stepping away, I wasn’t thinking of going anywhere else. I was thinking about studying philosophy at university, a complete directional change. I always felt like my career, as far as professional MMA, would start and finish with the UFC.

“But then admittedly, I didn’t expect it to continue on so long after me being a fighter. I’d not really considered the idea of being an analyst or commentator. So I’m very thankful for that time and that opportunity. But it’s weird, because I’m still very much in professional MMA and do want to be. I love commentating and analysing and training fighters. But now I’m right on the outside of the UFC for the first time in, well, forever.

“Before I was unknown to the UFC, and then I was under UFC contract from 2008, and now I’m just not a part of it at all, with efforts to properly exclude me in every way possible, which feels really odd as well, because I don’t feel like any of it is warranted.”

Hardy’s fighting career came to a halt in 2013 after he was diagnosed with Wolff-Parkinson-White syndrome, a condition where there’s an extra electrical pathway between your heart’s upper and lower chambers, which leads to episodes of rapid heart rate. The doctors medically cleared him to fight in 2018, and he has since been teasing his return.

Ideally, Hardy would have preferred to resume his fighting career inside the UFC Octagon. But since that isn’t a possibility anymore, he plans to look elsewhere.

“I don’t think it’s really quite sunk in yet,” Hardy said. “Whenever I visualised myself fighting again, apart from daydreaming about fighting in PRIDE back in the day, my visualisation as a fighter was always in the UFC in the Octagon. I spent a good 20 minutes in there before every commentary gig, just kind of walking around and feeling the canvas and stuff. It’s a very comfortable place for me now. So the idea of fighting somewhere else, it seems like a bit surreal and alarming.

“But the more RIZIN and ONE and Bellator I watch, we’ll see what happens. I know that people are aware and have been in contact. But at the moment I’m not really thinking about it too much, and until someone comes to me and says, ‘What about this date and this person,’ then I’ll kind of stay out of it and let my manager deal with it.”

Whoever he faces when he finally makes his comeback, Hardy ensures that he’ll be fully fit and prepared.

“I want to make sure I lay a good foundation before I go back in there and let someone try and kill me,” Hardy said.

Turning Down Two Fights In The UFC

A couple of years ago, the UFC offered Hardy fights with Joe Lauzon and Jim Miller, but he explained why he didn’t want to compete against anyone who was still in the mix.

“If I’m only fighting one or two more fights, I want to fight the guy,” Hardy said. “There a lot of guys on the roster, and I literally just don’t want to punch Joe Lauzon in the face. It’s as simple as that. As a fighter and a contractor, I should have some choice in that, I feel, especially at this point in my career, where you know for sure I’m not contending for a belt, and I’ve said that all the way through. I don’t want to be fighting people that are still in the mix, because I respect the mix enough to know that I’m not in it. But either let me fight someone else that’s not in the mix, or let me go.

“I even spoke to Dana about it a couple of times about it, and he just kind of laughed at me. These are actually his words: ‘Why would you want to do that? You’ve got a job for life.’”

Hardy believes his altercation with Herb Dean on Fight Island last July was the final nail in the coffin with the promotion, but the 39 year old stated that there he had already had a run-in with an unnamed UFC official.

“I’ve never felt like I had a bad relationship, but I’ve also never approached this job as it was a job,” Hardy said. “Sometimes, my frustrations would be people were kind of dragging their feet and doing the necessary work, and this was a person I’d complained about before, because I felt like opportunity would be amiss, not only for myself, but for other fighters in the region, young fighters that the media are trying to get ahold of that the UFC office in the UK is not connecting them, and all these opportunities that would be amiss that were provided for me when I was a fighter.

“It wasn’t like things had always been like that. Things had gotten considerably worse. When I signed in 2008, I had interviews every week. I was busy. I was talking to everybody that was there. Now, these guys are hardly getting any media attention at all, and the disconnect is of the PR team and the office, and that was my frustration, which I’d mentioned a few times. But it seemed to me like perhaps my complaints had not gotten further up the chain. In fact, they’d actually gone back to the person that I had maybe complained about, because their mood toward me had changed.

“I think the Dean situation didn’t help either, but obviously, the UFC couldn’t terminate my contracts after that because that would look really bad, firing a commentator after commenting on fighter safety. I think that was kind of nail in the coffin, to be honest, because of how much control they need to have over those events.”

Looking back, Hardy also believes that the situation escalated when he told the promotion that he worked for MMA and not for the UFC after the Dean incident.

“Something else that I said, which may have led to this situation, was when I spoke to the UFC after the Dean circumstance,” Hardy said. “I said, ‘Please don’t forget, I work for mixed martial arts before I work for the UFC.’ And I think that kind of burned a little bit in their minds, because when you work for the UFC, they want you to be UFC through and through, and I’m a grass roots fighter, and I’ve got fighters around me all the time, people that have come through the sport and are having the same struggles and are dealing with issues that prolong in mixed martial arts’ career. So yeah, I think I was a little bit too unpredictable in that seat, perhaps, and I think after that moment, they were possibly waiting for an opportunity to push me to one side.”

A few days after the UFC Fight Island 3 incident, Hardy called out Matt Brown for his comeback fight, but the UFC shut the door on the matchup by booking ‘The Immortal’ against Dhiego Lima at UFC Vegas 29. That was when the Nottingham native realised that the UFC wasn’t going to give him a suitable opponent.

“A few days after that, all of a sudden Matt Brown is matched on the most distant card in the future, there’s not any other matchups on it in the future,” Hardy said. “It was like in July, and they’re putting him on a card in July. You’re just kind of sticking a middle finger at me now, you know? So I immediately knew they weren’t going to match me, and even if they were going to match me, it was going to be a fight that just wasn’t at all appealing to me and wasn’t beneficial to me at this stage in my career.”

Fighting In RIZIN Or ONE Championship

In an ideal world, Hardy would like to move to RIZIN and fight Takanori Gomi, or lock horns with Shinya Aoki in ONE Championship.

“If I’m daydreaming, I can see myself fighting someone like [Takanori] Gomi in RIZIN,” Hardy said. “That would be a lot of fun. I know [Shinya] Aoki’s moving around weight classes in ONE, but I don’t think I’d be able to get down to 170 to be walking around on Fight Week.”

Rest assured, Hardy believes he will throw down when the time is right.

“I absolutely think so,” Hardy said. “The good thing is I’ve got a couple of Pavlovian responses from back in the day, to certain songs and music that I can use to get my brain switched back on. But I’ve also got a lot of frustration, which helps, from the last sort of 12 months or so. For as awesome as Fight Island was, the experiences of being out there, every single one of them was more stressful than the last. There were really intense environments for whatever reason – it was just crammed in and s*** up your nostril every single day and weird sleep patterns and clubs on the other side of the harbour.

“I feel like it would be quite cathartic to get into a training camp at this point. I just need something to get my teeth into. I need a date to aim for, and I can’t daydream a date in my head. I need to go, ‘Right, there’s an event that date. That’s what I’m aiming for, and I’ll start working toward it.’”

What are your thoughts on Dan Hardy’s comments about his departure from the UFC?