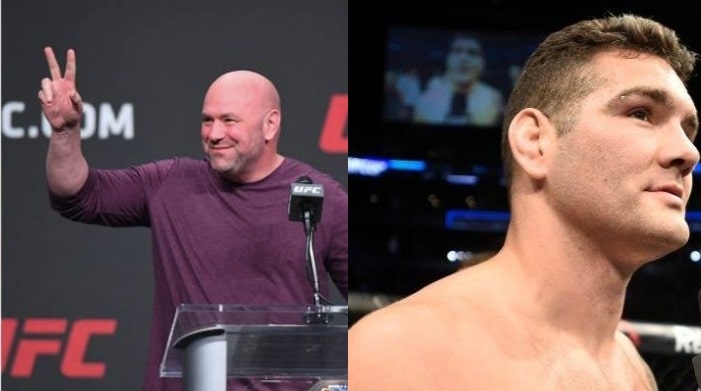 It wasn’t the light heavyweight debut Chris Weidman would have hoped for at UFC Boston, as he slumped to the canvas after Dominick Reyes caught him with a left straight. Reyes then swarmed in and followed up with more punches, and it was lights out for the former middleweight champion. And Dana White says he needs to sit down with the former champion.

Weidman has now lost five out of his previous six fights, and all losses came via stoppage. The “All American” shocked the world when he beat Anderson Silva to win the middleweight title. However, that fight now seems to have happened ages ago. Chris has won just one fight in the last four years, and after UFC Boston, questions started popping up about him carrying on fighting.

UFC president Dana White, like everyone else, doesn’t know just where it all went wrong for Weidman. After the event, White talked to the media about the former champion, and said he expects Chris to either move down back to middleweight, or think about retiring from the sport.

“What he said tonight didn’t sound to me like he is considering retirement”, White told reporters after the fight (h/t MMA Junkie). “So it’s a conversation he and I definitely need to have. This was his move up to light heavyweight, which obviously didn’t go well for him. So maybe he goes back down to middleweight or he thinks about maybe retiring.”

Weidman (14-5 MMA, 10-5 UFC) slumped to his fifth defeat in his previous six fights this past weekend. After the fight, Chris Weidman thanked the fans that traveled to see and support him. He also said he’d be back stronger. Weidman’s last win came against Kelvin Gastelum back in 2017.