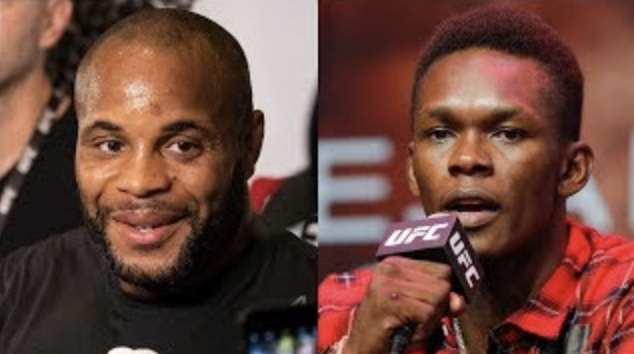 Although Israel Adesanya successfully defended his UFC middleweight title against Yoel Romero at UFC 248, the fight didn’t go as he had planned. While fans were expecting fireworks, what they actually got to see was an almost complete shutout by both men.

It obviously didn’t help matters the fact that they had to follow the high paced back and forth co-main event between Zhang Weili and Joanna Jedrzejczyk. After watching China’s first ever UFC champion defend her strawweight title, the audience were primed and ready for the night’s climax.

But sadly it never came.

With just 88 combined strikes between Adesanya and Romero, it’s safe to say that the the fans were left feeling disappointed. Following the fight, ‘The Last Stylebender’ defended his performance, accusing ‘The Soldier of God’ of refusing to engage with him.

Speaking on The Rich Eisen Show this week (as transcribed by MMA Fighting), Daniel Cormier, who was calling the bout cageside, said that Adesanya’s performance reminded him of an Anderson Silva fight, from back in the day.

“If you watched the fight, you saw the very first minute and a half, Yoel just kinda of stood there with his hands up. And he’s so frightening, that he almost froze Izzy without even doing or throwing anything. Honestly, it just kind of stayed that way. It was one of those fights where you kind of were anticipating the explosion, the fireworks, and it just never came. You got 25 minutes of, essentially cat-and-mouse. It was just weird.

“It reminds me of a fight way back in the day, Anderson Silva fought in Saudi Arabia and it was one of the nights that just did not turn out to be what everyone expected.”

When he says Saudi Arabia, we think Cormier was referring to Anderson’s fight with Demian Maia at UFC 112 in Abu Dhabi. But while many fans have called out Adesanya for the way he fought at UFC 248, the former UFC heavyweight and light heavyweight champion believes he fought a smart fight.

“I don’t [blame Adesanya]. When you fight Yoel Romero, a guy that has knocked out so many people, a guy that has really fought in that same exact way but finds ways to end fights with one action, you cannot think that Izzy would just go in there and be reckless.

“I’ve never seen anyone do it. He did what he had to do. This guy’s the champion. He’s a guy that if you’re willing to engage, he’ll give you your type of fight. But Yoel Romero’s not a guy that you want to be out there being reckless with. He’s just too dangerous. The risk is not worth the danger.”

Especially with the UFC middleweight title at stake. And while some fans may not be best pleased with Adesanya, Cormier doesn’t believe that his performance against Romero will harm his legacy.

“I think that he can be as big a star as you have in the UFC. Some guys just have it. Like you said, it just radiates off of him. You just see it. From the moment he walks to the Octagon, he officially marked his territory. You saw a young kid who had never done anything, become a champion in like a year.

“That doesn’t happen very often in the UFC and I think this was just one of those nights. Anderson Silva, it did not really affect his legacy having that fight in Saudi Arabia (Abu Dhabi) and I think that’s going to be the case with Izzy. He’s just going to move forward and his next fight is guaranteed to deliver because the guy he’s fighting, Paulo Costa, has never been in a fight like you saw Izzy have last week.”

During the UFC 248 post fight press conference, UFC president Dana White confirmed that Paulo Costa will challenge Israel Adesanya for the UFC middleweight title next. It is speculated that it will go down at UFC 252, in Las Vegas on July 11th.