Deontay Wilder Hits Out At Tyson Fury And Dillian Whyte 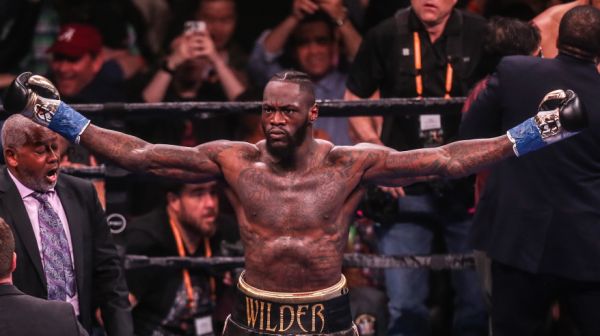 Wilder and Fury locked horns for the first time in December 2018, with the fight ending in a controversial draw. The two fought again in February, with ‘The Gypsy King’ winning via seventh-round TKO after dominating the entire fight. But ‘The Bronze Bomber’ has refused to accept defeat, making some outlandish accusations. Including that his opponent loaded his gloves, his water was spiked, and the referee conspired against him.

Speaking to the Last Stand Podcast (as transcribed by The Mac Life), Wilder reiterated his allegations, saying that Fury has got a “reputation” for cheating.

“He cheated. He flat out cheated,” Wilder said. “That wasn’t the best man, that was a coward of a man. He got a long reputation of cheating, and this right here is nothing less. He’s known. He’s a known cheater. So if you’re known to be a known cheater, why you gonna stop now? You know the Gypsies believe if they have an opportunity to cheat and they don’t cheat, they consider you to be a sucker.

“We know time and time again, you can go back through the history and the rap sheet of cheating, cheating and cheating consistently. Even with the [Wladimir] Klitschko fight, cheating and cheating. This make it no better. He definitely wasn’t the better man at that fight and it’s sad that I’m great in this sport that they have to cheat me to beat me. It makes me more powerful, and gonna make my legacy more stronger than what it is.

“I haven’t yet heard a valid proof of how gloves keep a smushed in form. How gloves flap all the way back. Why your hands in the bottom of the glove? Why did my ear have scratches deep inside of my ear? Because of your nails. There’s so many different facts and proof that we have, but it just shows the greatness of me.”

After losing to Fury, Wilder exercised the rematch clause in his contract. However, after several failed attempts to make the trilogy fight, the Brit has declared that he is moving on.

In case the fight with Fury does not happen, Wilder has named five men he’s interested in fighting. And top of the list is Dillian Whyte.

Wilder and Whyte have exchanged words in the past, and the former champion would love settle their differences in the ring.

Regardless if Wilder faces Fury or Whyte next, or anyone else on his wish list, he promises that it will be “must-see TV”.

“But he would be one on the list, [Andy] Ruiz will be one on the list, as far as hype – [Robert] Helenius could be one of them – he could come back and get the hype. You got [Joseph] Parker, you’ve got [Oleksandr] Usyk, I would love to fight him. He called me out at one point in time. There’s a lot of guys on the list and when that phone rings, just accept that offer. Accept that opportunity. Ain’t nothing nobody can say now.

“Let’s make it clear, Wilder don’t run from nobody and never has, never will. Never will. But we will see what happens man, it’s going to be exciting whatever happens. I’m an exciting fighter and I am must-see TV regardless, and it all will reveal itself.”

While Fury has his eyes on Anthony Joshua – who will defend his WBA (Super), IBF, WBO, and IBO titles next month against Kubrat Pulev – Wilder believes he has a contractual right to a trilogy fight with ‘Gypsy King’, and that the British boxer would be forced to fight him if he wins an arbitration hearing over the matter.

Who do you think Deontay Wilder should fight next?