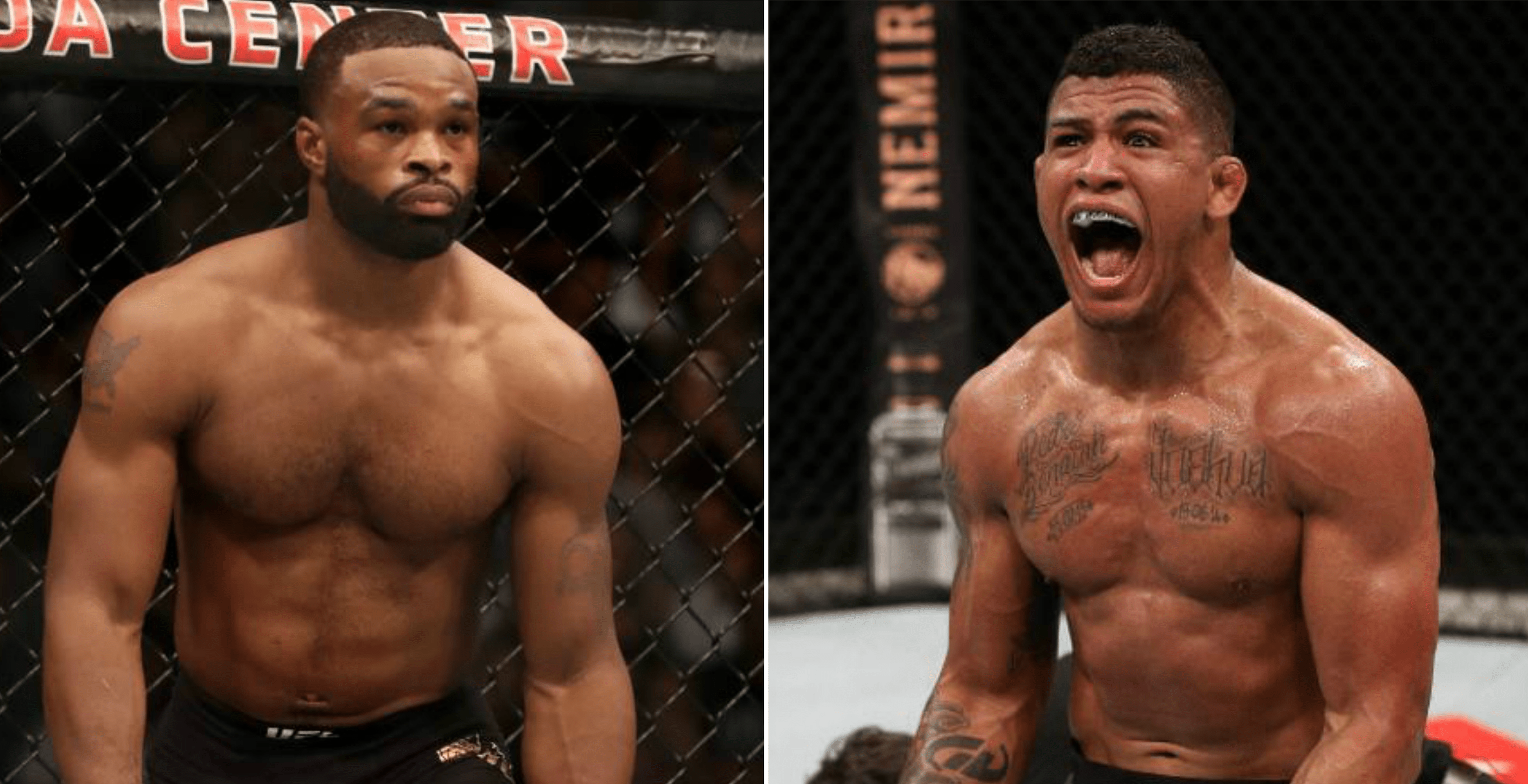 The former UFC champion, Tyron Woodley has his hands full with potential opponents right now. After the cancellation of his scheduled main event with Britain’s Leon Edwards at UFC London, both Colby Covington and Gilbert Burns were willing to fight on short-notice against the former champion.

After UFC London was completely scrapped, Woodley now has several potential opponents. Speaking to BJPenn.com, ‘The Chosen One’s’ coach Din Thomas stated that given the choice, they would prefer to fight Covington next.

“I mean it’s not really up to Tyron right now, I mean he’s not the champ anymore, so unfortunately he doesn’t any leverage to pick his opponents. I mean not that he did when he was champ but he’s got even less now. We obviously want Colby. I think that’s the fight more fans want to see but if Dana says it’s Leon [Edwards] then it’s got to be Leon. There’s no need to be difficult, Tyron believes in himself, I believe in Tyron, he’s going to win either way. If it has to be Leon then it has to be Leon, but we want Colby.”

Earlier this week, Thomas announced that he had left his coaching role at American Top Team, which is where Covington trains. While many fighters and coaches have an issue with Colby, Din says he doesn’t have a problem with his behaviour, but supports his fighter’s wish to fight him.

“It still doesn’t mean anything to me,” he said. “This is more just me getting my homeboy’s back because I know Tyron has a problem with him and he really wants to fight him. Leon is not a fight that he wanted but Colby is a fight that he wants, so it’s just me supporting my man and what he wants. For me it doesn’t matter, I don’t have any ill-will towards Colby, I don’t care about Colby. I don’t think about Colby one second other than when someone asks me about him. I don’t care whether Colby wins, loses, wins, or dies, it doesn’t matter to me.”

Before UFC London was postponed due to the coronavirus, the promotion played around with the idea of moving the card. Thomas explained how that impacted their preparations.

“We finished camp up on Friday and I normally go back home and Tyron goes back home then we meet up wherever the location is that we meet up at,” he said. “He was going out to London on Sunday and that was going to happen, then next thing I know it was on Sunday [the UFC] were like ‘Nah, we’re not going to do it in London anymore, we’re gonna try to do it in the States.’ I was going to leave on Monday so I was like alright cool I’m just going to get my tickets fixed. By the time Monday came around they were still talking about doing the fight. I remember being on my radio show on ESPN West Palm and I was communicating with Tyron while I was doing the show, saying just let me know where you need me to be, I got my bag packed in the car.

“Up until that Monday of fight week, Tyron was like ‘I’m still running and cutting weight, I’m just waiting for them to send me a location and opponent.’ The opponent was eventually going to be Gilbert Burns but the location still wasn’t set yet,” Thomas said. “Then by like 5:30 in the afternoon that’s when they actually pulled the plug on all of it and just said it’s not happening. That was when I let my guard down but up until that point, I was ready to go. That whole week was like madness, I was ready to go.”

But while Thomas and Woodley both insist they was prepared to fight Burns at the last minute, the Brazilian welterweight says he doesn’t believe them. Also speaking to BJPenn.com. Gilbert accused Tyron of being a liar.

“He’s a liar. He turned it down a couple of times. I’m not someone to say things about people but he is a liar. He knows, Dana knows, Sean Shelby knows he’s a liar because he turned it down and he made the UFC try for Colby. Then they were looking for RDA and he didn’t want to fight him. He knows I have the ground game and the knockout power that he didn’t want to fight. I’m orthodox, Leon is a southpaw. He didn’t want the fight, he’s a liar. As soon as the President of the States spoke saying no more than ten people, all of a sudden he accepted because he knew the event wouldn’t happen. Dana told him the fight was already off. He’s a liar, a freaking liar. He says he accepted, he’s such a liar,” Burns stated.

And Burns is sure the result of the fight between himself and Woodley would be end the same way as in his recent matchup with Demian Maia at UFC Brasilia.

The sixth ranked Burns sees himself in a perfect situation to fight someone above him in the rankings and with a win, go on to challenge for the title.

UFC president Dana White has said that every fight canceled due to the coronavirus outbreak will be rescheduled. However, as we know, things can change very quickly in the UFC.

Who do you think Tyron Woodley should fight next, Leon Edwards, Colby Covington, Gilbert Burns or someone else?