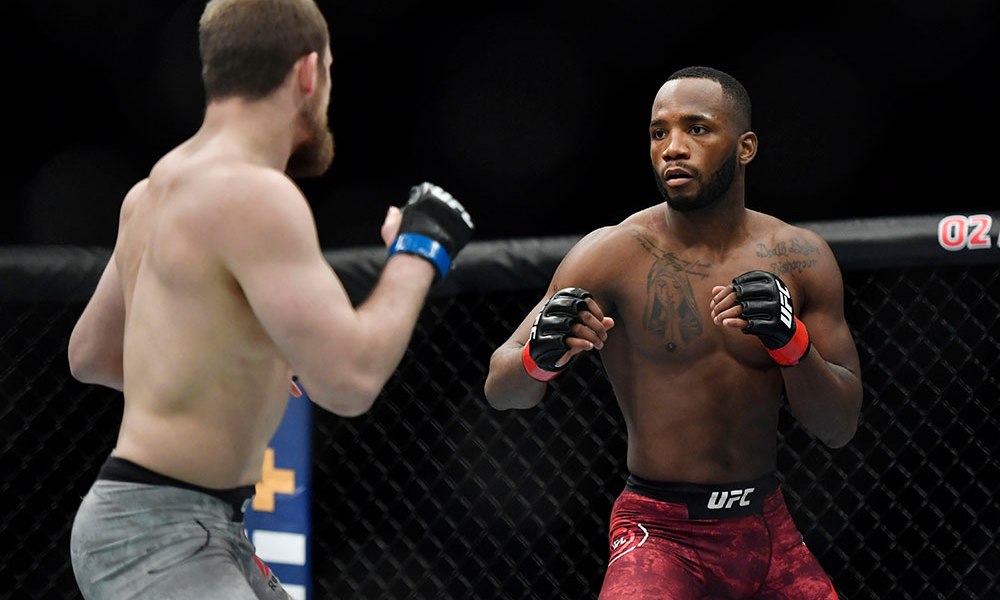 Leon Edwards is out to prove that the hype around Khamzat Chimaev is all dust and smoke. The number three ranked UFC welterweight intends to prove as much when they meet in the UFC Vegas 17 main event on December 19th.

“I’m Going To Get A Title Shot”

Due to the global coronavirus pandemic, Edwards has seen his UFC London main event with Tyron Woodley fall through, and lost the opportunity to fight Kamaru Usman for the welterweight title. As a result, he hasn’t fought since July of 2019. Speaking to MMA Junkie, ‘Rocky’ stated that the top fighters in the 170lbs division have all been avoiding him since he last fought.

“I was calling out the ‘so-called top guys’ in the UFC – [Gilbert] Burns, [Jorge] Masvidal, Colby [Covington] – for over a year, and they kept turning the fight down,” Edwards said. “So I thought, ‘OK, what’s the best option?’ (Stephen) ‘Wonderboy’ (Thompson) called me out, but if I go out there and beat ‘Wonderboy’ it does nothing for my career, and I’m in the same position I’m in now. So I thought, ‘What’s the next best thing outside the champion?’ It’s to fight the most hyped guy right now in the division, which I believe is this kid. The UFC loves him; Dana [White] loves him. If I go out there and smoke him, let’s see what they say. I feel I’ll be guaranteed a title shot after this.”

With no top five opponents willing to fight him, Edwards believes that Chimaev is his best option right now, in his quest to earn a title shot.

“I’m going in there happy with my position, happy with where I’m at,” Edwards said. “Obviously I would’ve preferred a title shot, but outside of that this is the next best option in the division. I feel, after this, I’ll be granted a title shot, so I’m good.”

Chimaev burst onto the scene earlier this year, with three incredible performances in 66 days, finishing all three opponents in devastating fashion. UFC president Dana White has described him as one of the most special fighters he’s ever seen. Edwards however, believes the hype is unjustified.

“Nah [the hype isn’t justified],” Edwards said. “From what I’ve seen in his fights, his wrestling tournaments, I just feel the level they’ve given him is made for him to win. I truly believe it’s going to be a shock to him when he gets in there with me. … They’ve done it before time and again, right? They try to build these guys up, and they get one good win, two good wins and then they push them straight to the top. They don’t give them time to build their career and learn stuff. We can name many times Dana White’s come out and been like, ‘This is the next guy.’ Then they get pushed up the rankings and beat straight away. He’s not on my level, and I’ll go out and show it.”

Edwards, who is riding an eight fight winning streak, believes that Chimaev is yet to face a quality opponent and as such, it’s difficult to judge the rising Russian born Swedish star.

“Let’s See How He Deals With adversity”

While Edwards isn’t facing a top contender as he wished, he believes that derailing the most hyped man in the UFC will earn him a title shot. And that’s exactly what he plans on doing come fight night.

“It’s totally different when you hit people with shots, and you get resistance. Other people he’s fought have offered no resistance. He’s basically gone in there and done what he wanted to. I’m going in there to finish him, and I think I need to finish him to prove to the world he’s not on my level, and I deserve a title shot next.”

How do you think Leon Edwards vs Khamzat Chimaev plays out at UFC Vegas 17?