Emilio Urrutia Promises To Put On A Show At ONE: Fists Of Fury 2 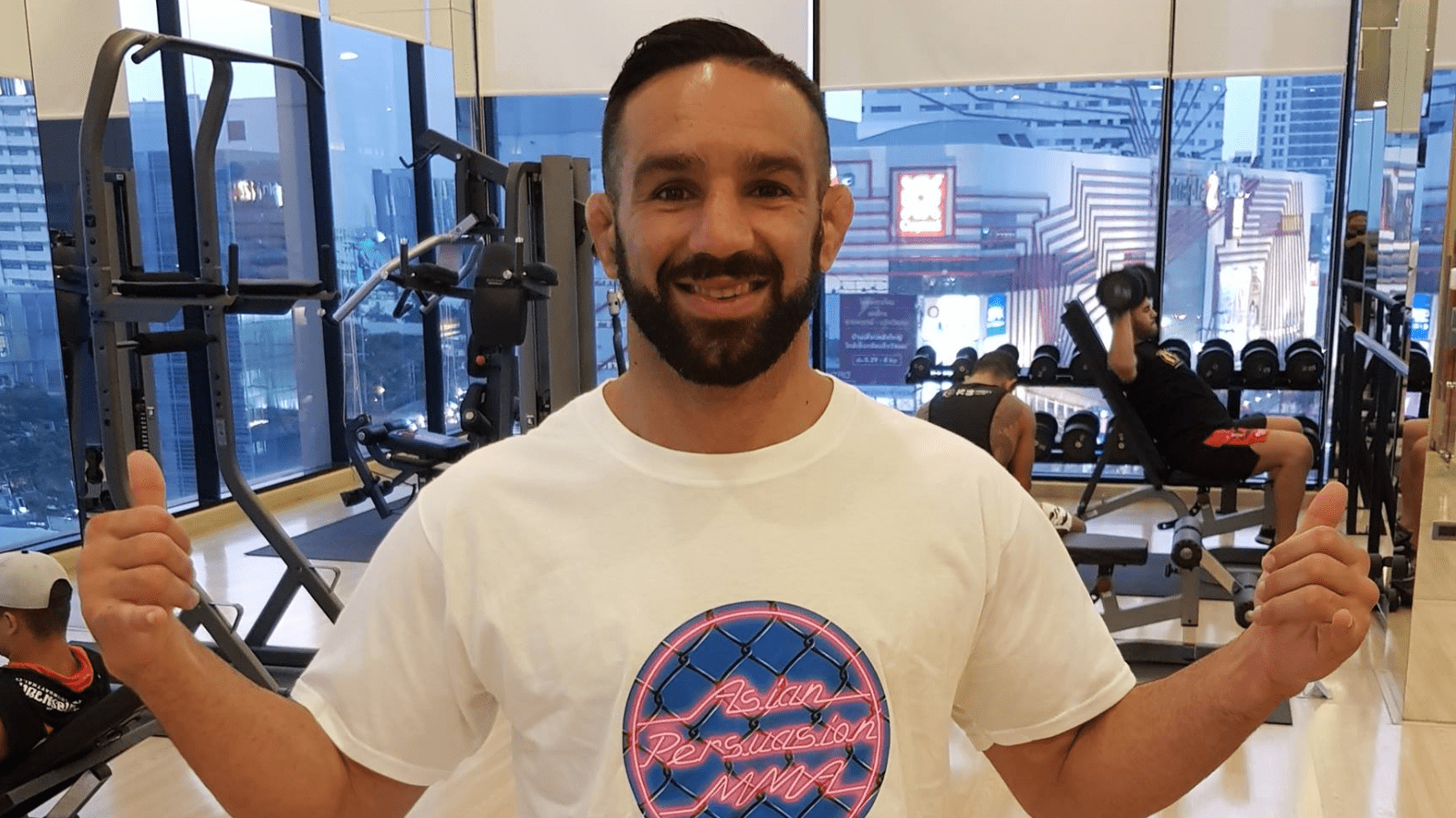 Emilio Urrutia will make his return at ONE: Fists Of Fury 2 against Mark Abelardo, in what will be his bantamweight debut. The last time the 34 year old fought, he lost to Yoshiki Nakahara at ONE: Clash Of Legends in February 2019. Since then, injuries and the coronavirus have kept him sidelined.

Ahead of his return, Urrutia feels blessed to be able to compete once again, as during the global pandemic, he thought that his career could be over. In an exclusive interview with Asian Persuasion MMA, ‘The Honey Badger’ said that he was pondering a life after fighting.

“This Is What I’d Be Doing”

“After the corona, I was thinking maybe it’s over and we weren’t going to have anymore fights,” said Urrutia. “And I was trying to move on and find something else. But honestly, I’m just really grateful that there’s still fights going on and I can still make a living right now.

“Just the opportunity that I’m able to compete and do what I really want to do. If I had to pick something to do to get paid for, this is what I’d be doing and I get to do it. Right now, in these crazy times, everybody struggling and losing everything, the fact that I can make money fight, I’m just grateful for that. That’s really where I’m at right now, just taking it all in.

Now with his return just days away, Urrutia promises to put on a memorable performance in his first fight in two years.

“I’m gonna put on a show,” said Urrutia. “You know I’m an entertainer so that’s my job. That’s my goal this week, to entertain the people.”

Like the rest of the world, 2020 had its fair share of trials and tribulations for Urrutia. However, he feels that the pandemic-plagued year was still a good one for him overall.

“I had a good 2020,” said Urrutia. “Everybody had a pretty bad 2020 but I was able to learn a lot and grow a lot. And I got realy good at other things. I started a podcast, I started gardening. I found some new hobbies.

“They took away fighting but I was able to pick up other things. So I’m very adaptable and I’m glad that I was able to adapt and overcome and keep the ball rolling.”

“I Was Still Training Full-Time”

Even with the pandemic affecting the lives of many fighters, Urrutia still kept busy with his training with the hopes that fighting would once again become an option, and was fortunate to have several UFC fighters as training partners.

“Phuket in 2020, we were locked down pretty heavily. We were closed down to our sub-districts, which is not very far. We had a couple-mile radius that we could go. Luckily, everybody lives in the same district. Everybody had mats in their house so we were just traveling to everybody’s houses training in different mat spaces. It wasn’t the most ideal. The house training was good but it kind of sucked. But we found a way.”

When Urrutia was booked a fight last year, a nasty sprained ankle forced him to withdraw.

“Overall, I got no complaints,” said Urrutia. “I couldn’t fight and stuff like this. When I did get a fight, I got a really bad injury. But it’s all part of the process, just a better story to tell when it’s all over.”

Urrutia is is riding a three-fight losing streak, and reflecting upon these losses, he contemplates whether he should’ve moved down to bantamweight sooner in his career.

“As far as I’m concerned, I’ve been finished in the last three fights,” Urrutia said. “Maybe I should’ve been fighting at a lower weight class this whole time. Been feeling pretty good this week. We’ll see this week. I had three very hard opponents, back-to-back-to-back. But they didn’t come out in my favour. I have no excuses, I lost those fights. I know with a couple of things here and there that could’ve been done differently. I still kind of feel like I can definitely run any of those fights back and feel like the results will be a little different.

“It’s been a tough one. That’s been the biggest battle, just trying to swallow those three losses and putting them behind me. Because I feel like every one kind of made the other one worse. I lost against Marat [Gafurov] and then I fought Li Kai Wen on pretty short notice. I’m a gambler, I love to gamble. You want to give me some odds? I’m gonna take them and I’m always gonna bet on myself. I remember I lost to Marat and then I was on vacation. Then I got offered Li Kai Wen on three weeks notice, which was like two weeks of training and like fight week. I took a gamble with that and lost that. Then I fought another tough guy (Nakahara) but that was a fight I should’ve won. That was Yoshiki’s debut and I was a veteran of four fights in ONE.

Urrutia has done the majority of his training at the fabled Tiger Muay Thai gyn on the island of Phuket for the last seven years. But now living in Thailand’s capital, the American native has been training at Bangkok Fight Lab.

“It’s been tremendous,” Urrutia said. “I love Tiger Muay Thai. I have all my family there, I’ve been there for seven years. It’s kind of hard to break those bonds. If I can, I’ll go there and train for sure. Maybe if I have a longer fight camp, I’ll go to Phuket for four weeks to get some good sparring in and then come back home to regroup.

“But overall in Bangkok, the training has been absolutely tremendous. I’ve been in this game a long time, I’ve been a coach for a long time and I’ve trained with the best guys in the world for a long time. So I feel like the best part about me going to Bangkok Fight Lab is I’ve been able to pass all my knowledge to my new students. And by passing my knowledge to my students, I’ve been able to reinvent some things in myself. Teaching them has held me accountable for making me better. My students have been making me better. When I see them rise to the occasion, it inspires me to rise to the occasion.

“I got my little ‘Honey Badger’ army now in Bangkok. And I love these guys. They show up every day. This is a different atmosphere. It’s a very homely gym and a lot of these guys have regular jobs. But they go in there and I demand a lot. My classes aren’t easy and they come in there and they do their best every day. That inspires me to do my best.”

“Got My Boy Shannon ‘OneShin'”

Now that he trains Bangkok Fight Lab, Urrutia is training along side fellow ONE Championship fighter Shannon Wiratchai. The ONE featherweight has played a crucial role ahead of his return to the ONE Circle.

“I got some great training partners,” said Urrutia. “I got some national team wrestlers. I got my boy Shannon ‘OneShin’ [Wiratchai], who I give the reins to for this camp, for my game plan and striking. He’s been coming in the mornings and we’ve been working together, holding pads for me and showing me all his little tricks. He’s like a super martial artist. So it’s been great to pick his brain and learn some new styles.

“Then I got Detchadin [Sornsirisuphathin]. He’s super-fast, super-explosive. Really good striker, super-hard worker. The guy’s never tired. Between him and Shannon, he’s a little bit smaller so it’s good. I can get that speed advantage from him. Shannon’s a little bit bigger. I got Shannon working with me.

“It’s been cool. I feel like it’s a lethal combination with my grappling and striking prowess. Everybody’s been adding pieces to the puzzle. So that’s been great, I’ve been really enjoying that. I’m excited to put on for my team. These guys have never seen my fight before.”

Fighting Without A Crowd

Urrutia’s opponent, Abelardo, is a Filipino-New Zealander who also does his training in Thailand. ‘The Honey Badger’ isn’t taking this fight lightly as his opponent trains at the storied Fairtex Gym in Pattaya.

Unlike his previous fights, Urrutia is looking to take a safer approach this time around. Which could be helped by the fact that he’ll be fighting without any fans in attendance for the first time in his career.

“I want to put a nice game plan together and put it into play,” said Urrutia. “We’ll see what happens. There’s a lot of new elements. I’ve never fought with no crowd. I’m gonna see how I like it. I know he’s fought in ONE Warrior Series a lot so he’s probably used to this. So we’ll see how that is.”

“Put Him On His Back”

The Bangkok Fight Lab representative predicts that the fight won’t make it to the final bell.

“I’ll probably put him on his back,” Urrutia said. “I need to get a submission in ONE. I’m a submission fighter and I have no submissions. I’ve been striking this whole time and I don’t know why. I don’t want to waste a lot of energy taking down these big guys. I would like to take him down and beat him up on the ground, take away all his chances of winning.

“But I wouldn’t be surprised if I knocked him out. I got some good power and I’m feeling pretty strong at this weight. If I hurt him and I put him down, that’d be great. But the game plan is to get on top of him, put him on the fence, put him to the ground, and take him out.

How does Emilio Urrutia fare against Mark Abelardo at ONE: Fists Of Fury 2?