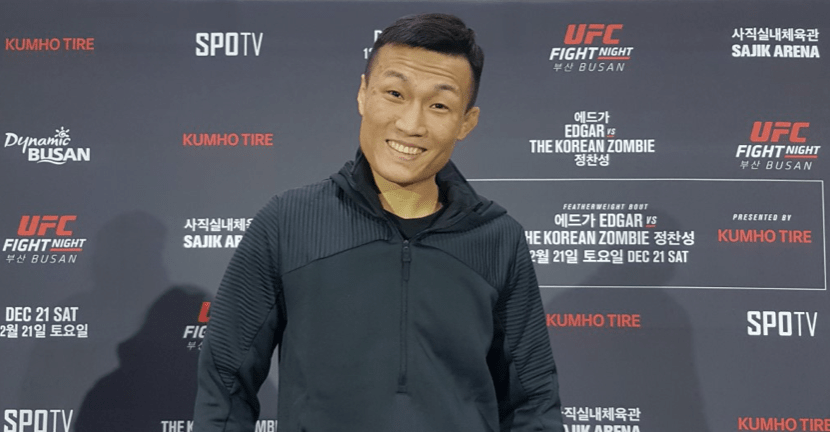 Since defeating Frankie Edgar at UFC Busan back last December, ‘The Korean Zombie’ has been sidelined with an eye injury, that eventually required surgery. However, Coach Eric Albarracin has said that Chan Sung Jung is ready to return to the Octagon.

Speaking to BJPenn.com, Albarracin said that he would love to see ‘The Zombie’ fight Alex Volkanovski for the UFC featherweight title, when he returns from injury.

“I love ‘Korean Zombie’, it’s an honour to work with him. He’s someone that learns extremely fast. I would like to see him back ASAP, he’s ready. I’d love to see him get the title shot against Volkanovski, that is what we are pushing for. Volkanovski vs ‘Korean Zombie’, ‘Triple C’ is retired so Volkanovski is out of those plans, but it’s time for the Zombie Apocalypse. That is the fight to make in July or August.”

One could argue that after a featherweight run that put Max Holloway in the 145lbs GOAT conversation, a rematch with Volkanovski is the fight to make. But if that fight doesn’t come to fruition, ‘The Zombie’ is the front-runner for a shot at UFC gold.

If Albarracin doesn’t get his way, the obvious matchup for ‘The Zombie’ would be former title challenger Brian ‘T-City’ Ortega, after he slapped his good friend Jay Park, at UFC 248.

“Most definitely. Brian Ortega slapped Jay Park a Korean superstar and one of Zombie’s best friends. I’ve never seen him that mad before in my life. ‘Zombie’ wants a piece of Ortega and get that revenge that he wants so bad. Don’t be surprised if Jay Park is in the corner as well for that fight.”

Who would you rather see ‘The Korean Zombie’ go up against next, Alex Volkanovski or Brian Ortega?