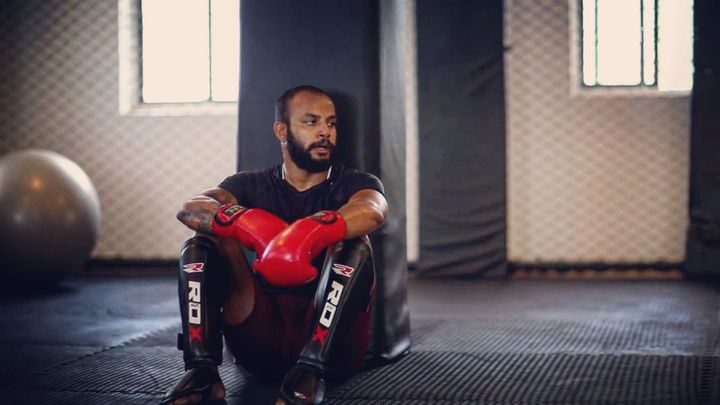 Few days ago, Indian MMA veteran Vikas Singh Ruhil called out “Captain Crazy” Srikant Sekhar for a fight at MFN 3. Srikant has quickly established himself as one of the top Indian MMA fighters, and was immediately called out after his fight ended at MFN 2. With the next edition of Matrix Fight Night around the corner, Srikant is the proverbial pot of gold that every other fighter at lightweight and welterweight wants to get their hands on.

That said, responding to Vikas, Srikant revealed that he wants to cement himself as the best pound-for-pound Indian — and one of the best Asian fighters on the planet. Sekhar explained that to do so, he has to fight the best, and a fight with Vikas doesn’t interest him much at this time.

“I don’t have anything to say about (the fight)”, Srikant revealed. “For me, it is a boring fight. Everyone here in MFN is trying to go for the “Captain Crazy belt”, and the belt is with me right now. I have all the control.

Srikant Sekhar previously fought “Delhi Don” Jason Solomon. Going into the fight, there was a lot of buzz, considering Jason is one of the more charismatic and well-known Indian fighters. Srikant however does not feel that’s the case with Vikas Ruhil.

“I don’t think Vikas is a very interesting fighter. That is what I feel. My grappling is superior to Vikas’s, and I don’t think he even has stand-up.”

After his fight at MFN 2, Anshul Jubli, the undefeated prospect called out Sekhar. Srikant admitted that he would be interested in fighting Anshul, but not at MFN 3.

“I have a lot of interest in Anshul. Technically, he’s sound. He is unbeaten, and I have nothing against any of the fighters. But I feel Anshul is a better fighter than Vikas any day. So I will be more interested in taking on Anshul at MFN 4, but let’s see if Anshul performs better at MFN 3, and how he does.”

Srikant’s goal at this time is simple – to become the best Indian fighter, and for that to happen, he believes there is only one opponent he needs to face to prove his standing at a global level.

Sascha Sharma previously competed in The Ultimate Fighter, before competing in India. And “Captain Crazy” believes that he is the man to beat.

“I feel Sascha Sharma is one of the best fighters in Indian MMA and in the lightweight division, and he is ranked #3 (in Asia by Tapology). I’m currently ranked #14. So I want to fight Sascha Sharma, and I’ll be glad if MFN could make that fight happen this year, or even next year. So, that is the aim.”

As a parting shot, Srikant Sekhar had a few words for Vikas.

“I don’t see a challenge in you. I finished both my previous two fights in less than one and half minutes (in the first round). Probably I will finish you in less than half a minute. That isn’t a big challenge for me, and I don’t see it as a big fight. But if you’re ready to go down, I’m ready too. It will be easy money for me.”