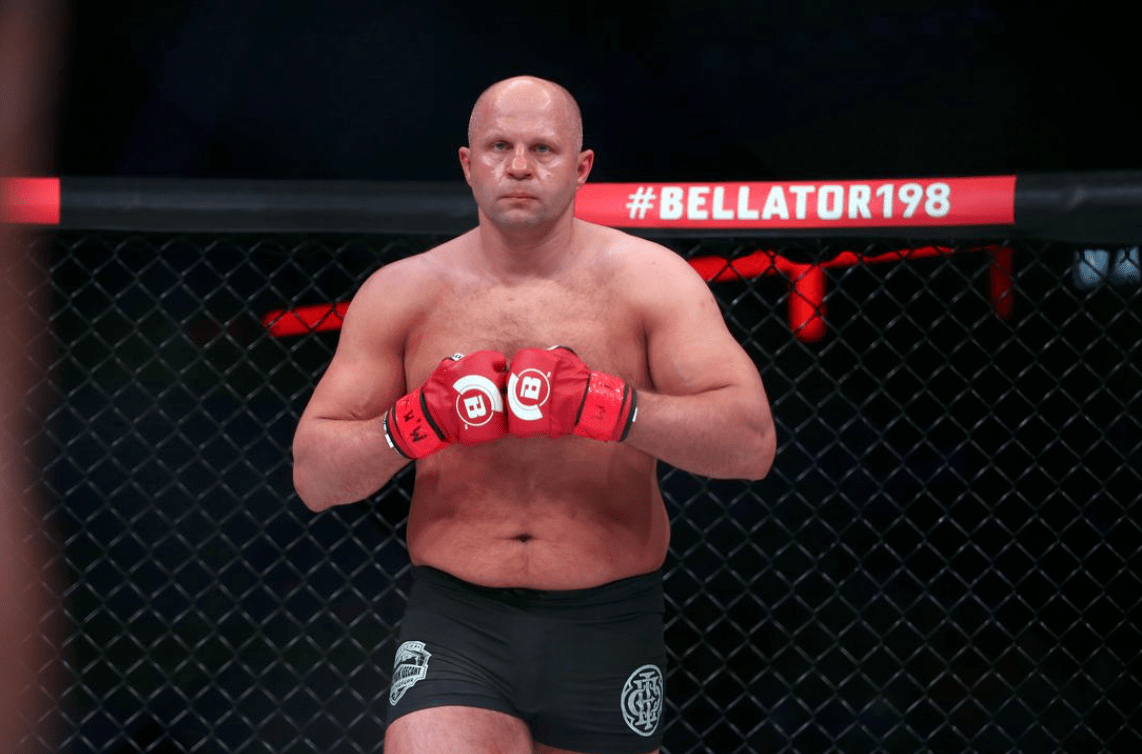 Fedor Emelianenko, regarded by many fans as the greatest heavyweight in the history of MMA, was in attendance at this weekend’s Bellator 244 supporting his teammates who fought, including the newly crowned champion, Vadim Nemkov. But beside cornering his teammates, ‘The Last Emperor’ also shared some insights into his own future plans.

Retirement Tour And His Next Fight

Fedor was set to go on a ‘retirement tour’ with Bellator, which would include US, Russia and Japan, before the global coronavirus pandemic struck. Speaking to MMA Junkie, the 43-year-old said that he hasn’t stopped training despite the inconveniences.

The former PRIDE heavyweight champion doesn’t want to wait until the pandemic is over to step back inside the cage.

“I don’t necessarily feel a sense of urgency [to compete], but I also don’t want to wait too long, either. If there are no people in the audience then the TV audience is that much larger. It doesn’t take away from the fight. Eyeballs are still watching.”

Emelianenko has a meeting with Bellator president Scott Coker planned soon, where they will discuss his next step.

“I have a meeting with Scott to discuss what the future holds as far as fighting. Obviously, [the pandemic] is unfortunate. Tomorrow there will be a fight without fans, but these are the times we’re living in.”

Talking of future plans, Emelianenko would like to fight Fabricio Werdum again to avenge one of his six career losses. The Brazilian recently became a free agent,

“For myself, yes, I would like to fight him. Whether that’s a fight fans are interested in seeing or Bellator is interested in putting on, I don’t know that.”

Although Fedor doesn’t mind fighting inside of an empty arena, Coker believes that it would be a shame for such a legend to compete the last few times without a crowd to witness it.

He also plans to go through with the ‘retirement tour’ after the coronavirus situation gets under control.

“[The plans[ haven’t changed. It’s just now we have a little beat now because of the COVID situation,” Coker said. “We’re going to see how it goes because Europe has started to open up where you can actually have some fans. The numbers are way down, and they kind of have it under control a little bit better than we do [in the US].

“… But listen, Fedor has to fight in front of fans. I think that’s why you don’t see a lot of the MMA stars fighting now, because they need the fans there to support it. Fedor is the same way. He’s the greatest heavyweight of all time. For me, it would be a shame for him to fight in an arena where there’s nobody there to watch his last few fights. We’re going to play it by ear. This is actually the first time I’ve seen Fedor.”

The former UFC heavyweight champion has also expressed interest in the rematch against Emelianenko, whom he submitted back in June 2010. And Coker doesn’t have anything against it.

“I love Fabricio, and it’s something really that’s Fedor’s decision. One of the things I’m going to talk to Fedor [about[ tonight is, ‘Is this an important fight for you?’ Whatever he says, then we’ll go make it happen,” Coker said. “If it’s an important fight to him, then we’ll probably put it together. If not, it doesn’t mean we won’t still pursue Fabricio.

Would you like to see a rematch between Fedor Emelianenko and Fabricio Werdum?