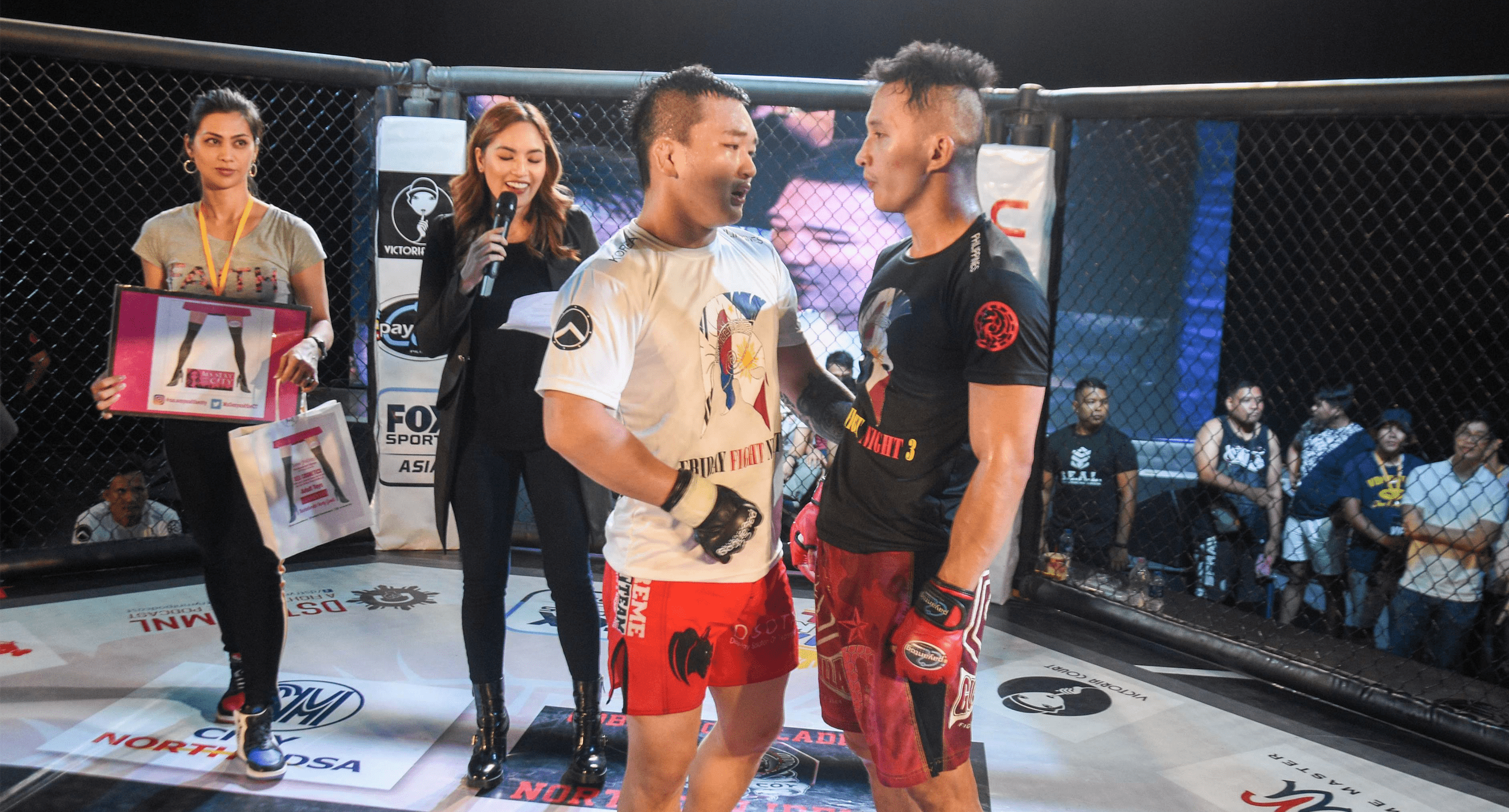 In the main event of FIGHT NIGHT III: PHILIPPINES VS. KOREA, South Korean standout Min Hyeok Lee turned in a solid performance, beating Filipino veteran Miguel Alo by clear-cut unanimous decision. Both men provided fans with a tremendous display of offensein a contest that saw the two lightweights exchanging unyielding blows and momentum-shifting takedowns for three rounds. With Lee showing superiority in the grappling department, all three judges at cageside awarded the victory in favor of the South Korean combatant.

Min Hyeok Lee of Extreme Combat/Top Gym BF stated: “I’ve been training hard for a long time and this was just me flowing. I am happy with my performance against a veteran of the sport like Miguel Alo. I totally respect him as a competitor. I apologize because I wasn’t able to get the finish because Miguel is no pushover. I hope I can compete again in the Philippines and put on a great show for the fans.”

In the co-main event of the evening, Kim Jae Woong of South Korea stunned the partisan Filipino crowd after submitting hometown hero Dennis Domingo. From the get-go, Kim immediately looked for a takedown and managed to effortlessly execute one against Domingo’s will. On the canvas, Kim smoothly passed Domingo’s guard and locked in a deep rear-naked choke to force the tap, clinching the victory in just 72 seconds.

In a battle between household names of Philippine mixed martial arts, Norman “Gunman” Agcopra of Elorde Metacore emerged triumphant against Genil Francisco of D’Elements Gym. Agcopra overwhelmed Francisco in the stand-up for three whole rounds while avoiding his opponent’s vaunted wrestling game. In the third and final round, Agcopra confidently lit Francisco up with a creative sequence of strikes to earn him a resounding win on the three judges’ scorecards.

Kevin Guevarra of Hitman MMA sent the crowd at the SM Skydome into a frenzy after stopping “Big” John William Tirona of Gym Core. Guevarra’s striking was on full display as he easily picked his spots, including a right straight that dazed Tirona. Visibly still hurt from the blow, Tirona was unable to answer the third round bell and the victory was awarded to Gueverra.

“The Argonaut” Ian Jay Batoto of Elorde Southbox-Checkmat authored impressive grappling performance, defeating Ezekiel Cerbito of Bear’s Cave MMA. Cerbito tried to make it a stand-up contest early, but Batoto used his grappling skills and took the action to the mat where he sunk in a rear-naked choke to finish his opponent in the first round.

Alexander Aballe of De Tomas MMA had his hand raised in a featherweight contest against Sprawl MMA’s Jayco Madrona. He showcased a much-improved striking arsenal for the majority of the bout before taking matters to the ground midway through the second round. On the mat, Aballe displayed his dangerous submission skills, quickly and effortlessly locking in the guillotine choke to claim the victory.

Local Filipino athletes Christchan Buentiempo and Rod Santos locked horns at the center of the cage to the roar of a packed arena. Looking to make an impression in his first outing under the FIGHT NIGHT banner, Buentiempo made quick work of his compatriot, drilling Santos with a barrage of ground strikes to force the stoppage in the first round.

Edrion Macatangay of Hitman MMA left a lasting impression in his cage meeting with Luke Quinlan “Son Of God” Cruz of Tough Guys International. After a few brief exchanges at range, Macatangay closed the distance and hurt Cruz with a volley of strikes, sending him reeling towards the cage fence. He then unloaded a barrage of punches as Cruz covered up before the referee called a halt to the contest.

Setting the tone for an action-packed evening was a flyweight encounter between Mark Postrano of Ronald Boxing Gym and Cesar “The Problem” Paragas of Hitman MMA. The two bantamweights put together an exciting three-round striking showcase. In the end, it was Postrano who walked away with the win by unanimous decision.