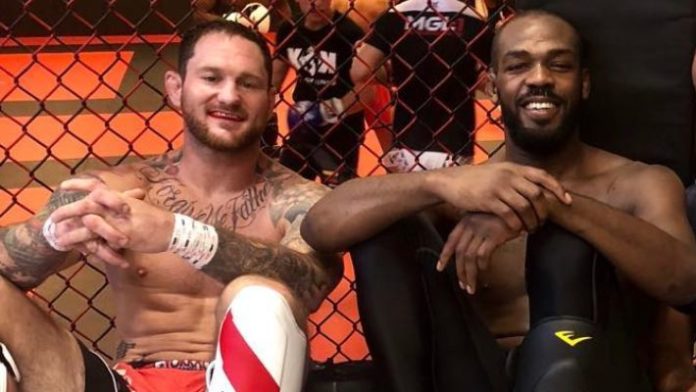 We previously reported about Jon Jones and former Jackson-Wink MMA coach Frank Lester falling out after UFC 239. Lester took to social media, to accuse Jon and Mike Winkeljohn of underpaying him, which reportedly resulted in Lester falling short of $2,200 in closing costs to purchase his house.

Lester alleged that Jon Jones had verbally agreed to pay him anywhere between $20-25K for 12 weeks of work, while preparing for Thiago Santos at UFC 239. Frank then told MMA Fighting that he was unceremoniously removed from Jones’s corner days before UFC 239, and was later handed a cheque for $7,000. Frank Lester also alleged that Winkeljohn gave him an ultimatum to either accept the cheque and keep quiet, or leave JW.

“(Jones) did everything he could to s*it on me and my family”, Lester told MMA Fighting.

Jon Jones however denied any wrongdoing, and hit back at Lester, saying he was removed from his corner for using drugs during the fight week. Jon also threatened to go to the police, following Lester’s post on Instagram, where he told Jones to keep his security close to him.

Lester also reportedly showed MMA Fighting several text messages, allegedly between him and Jones’s team. He said he stormed out of the room when Winkeljohn asked him to take the $7,000 and stay silent, or quit the team.

“Out of nowhere, coach Wink goes, ‘Well, you can take the seven grand and shut the f*ck up or you can leave'”, Lester said. “I said, ‘Well, I’m going to walk out the f*cking door because what you’re telling me is f*ck my wife, f*ck my two kids, and f*ck me’.”

Frank Lester then detailed how he started sparring with Jon Jones just weeks before his fight with Anthony Smith. Jon dominated the fight, and Lester claims that Jones was so happy, he offered Frank a full-time coach role, and a role as the secondary kickboxing coach after Winkeljohn.

“He’s like, ‘Hey man, I just want to say thank you so much for your work in this last camp”, Lester remembers. “‘I truly believe you were the missing link to what we needed.'”

“He’s like, ‘What do you think about that (role of secondary kickboxing coach)?’ And I said, ‘I think that sounds great'”, Lester said. “And he said, ‘This time, I’m going to give you a full coach’s pay, and all my coaches make between 20 and 25 grand.”

With Jon offering him a full-time coach role, Lester claims that he automatically believed that he would be paid at least $20K.

“He shook my hand, he looked me in the eye, and he said, ‘How does that sound?'” Lester said. “I said, ‘That sounds f*cking great, Jon Jones. I really appreciate that, champ.’ And he goes, ‘Well, hell yeah, let’s get it.'”

Now as a part of Jon’s team and his inner circle, Lester said he got to witness how Jones prepares for his fights. He also said they chalked up his training camp leading up to UFC 239.

“We all get his jeep and we drive around, we smoke a blunt, and we get back in the gym. We start stretching out. We always pray in, and we always pray out. Sometimes Jon does it, and sometimes it’s like, ‘Hey, Frank, you do it this time, or Eric, you do it this time.’ Either way, someone prays in and says, ‘Lord, thank you for our lives, and grant us a good training session and (give) the energy and the wisdom to give Jon the proper training he needs to win this next world title.’ And then we train. We train f*cking hard.”

However, Jones’s manager Abe Kawa told MMA Fighting that Jon never promised Lester that he’d pay him $20K, and that he was just a sparring partner leading up to UFC 239.

“He’s never underpaid a coach before”, Kawa said. “Frank is the first one to say so, and Frank got fired, so that might be why.”