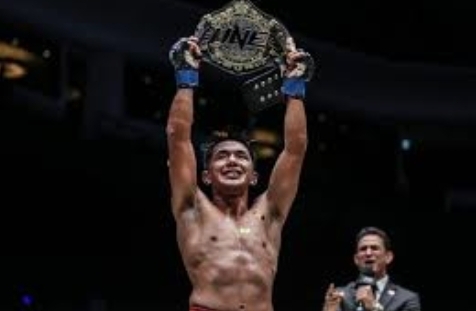 When Geje “Gravity” Eustaquio sets foot on the ONE Championship stage to compete, the Filipino superstar is the picture of composure.

However, the ONE Flyweight World Champion admits there are plenty of thoughts that run through his mind each time he takes on a new challenge.
“It’s normal for athletes to feel pressure because there is an expectation from coaches, teammates, and fans for us competitors to win and perform to the best of our ability,” he explains.
“Pressure is a mental weight that we have to carry and deal with prior and during our matches. It will either make you or break you.”
Despite the pressure whenever he straps on four-ounce gloves, pacifying it seems to be the forte of the 29-year-old native of Baguio City, Philippines.
“I handle pressure by remembering the dreams that I want to achieve. By simply going to the gym, it gives me an assurance that all will be well,” Eustaquio says.
According to Eustaquio, what has helped him the most in his professional career has been the way he approaches the mental aspect of his preparation.
“I do a lot of visualization to prepare for my fights, so I’m mentally prepared as well as physically prepared,” he states.
“When I get in there, I’ve studied my opponent, I’ve dreamt about my opponent, and I’ve seen my opponent in my head several times before the fight even starts.”


Chalking up to a simple martial arts philosophy of treating pressure as a training partner, Eustaquio believes that it also serves as an eye-opener for martial artists like him.
“Sometimes, pressure makes good champions see the positives. It is very hard to keep away from the negativity, but true champions take the negatives and turn them into positives,” he conveys.
Eustaquio looks to have a few more proud moments as the lionized kingpin of the flyweight division, beginning on Friday, 25 January as he faces Brazil’s Adriano “Mikinho” Moraes in the first trilogy bout in ONE Championship history.
Both men are set to collide in the main event of ONE: HERO’S ASCENT, which emanates from the 20,000-capacity Mall Of Asia Arena in Manila, Philippines.
Eustaquio and Moraes first met when they squared off for the inaugural ONE Flyweight World Championship at ONE: RISE OF THE KINGDOM in September 2014.


On that occasion, it was Moraes’ superior grappling skills that earned him the victory, submitting the Filipino with a second-round guillotine choke.
They met again in a grueling title unification contest at ONE: PINNACLE OF POWER in June 2018, where Eustaquio earned two of the three judges’ favor to win via razor-thin split decision and emerge as the undisputed ONE Flyweight World Champion.
Although a victory over Moraes can solidify his status as one of the top flyweights in the world, Eustaquio is more after showcasing his improvement, and that is the kind of pressure he claims he thrives under.
“I have fought Adriano twice. For me, the pressure is not about winning or losing to a talented athlete like him,” he reveals. “The pressure is all about getting better for our upcoming fight.”
“I am ready to show the world my development and the new things I learned in the span of six months.”