Gina Iniong To Take A Break From Competing, For A Very Good Reason 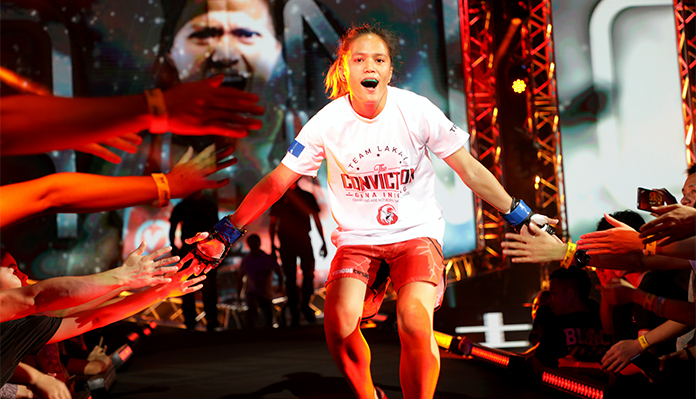 Team Lakay’s Gina Iniong defeated her last opponent Asha Roka at ONE: Fire and Fury back in January, just one month after winning a gold medal in kickboxing at 2019 Southeast Asian Games in December. The number five ranked women’s atomweight is now taking a break from martial arts, while expecting a child with her husband Richard Araos.

When she found out that she was pregnant, ‘Conviction’ had thoughts of retirement, but her coach Mark Sangiao advised her not to rush such an important decision. Speaking to ONE Championship, the Team Lakay head coach explained why he recommended Iniong to wait before making a final choice.

“She thought about retirement, but I told her, ‘Don’t think about it yet,’” Sangiao said. “I told her to focus on her pregnancy and then maybe she can make decisions after if she really wants to stop.

“I told her that it is hard to decide right now. I’ve seen a lot of people retire, then come out of retirement. It’s best for her to just focus on her well-being and pregnancy, and then worry about the next steps in her career later.”

While the news of Iniong’s pregnancy may surprise some fans, Sangiao said that Gina has been thinking about starting a family since last year.

“Even before the SEA Games, she was telling me that she wanted to focus on her family,” Sangiao said. “She said they’re getting older and they already want to have a child. This is such a huge blessing for her. She wanted this for a long time, and it was given.”

Sangiao added that Iniong is out of competition indefinitely, and that ONE Championship and Team Lakay stand firmly behind all of her decisions.

“We cannot really tell if Gina Iniong will return,” Sangiao said. “It’s her decision. We cannot really say. We told ONE already about it, and they sent their congratulations. They also told her not to think about retirement at this time. It’s her life and whatever she does, we’ll support her.”