Henry Cejudo And Dominick Cruz Get Heated Ahead Of UFC 249 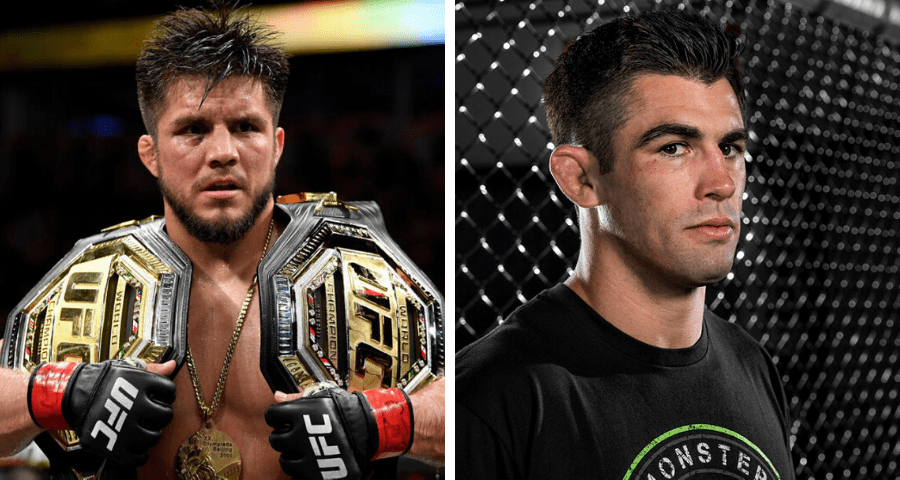 Henry Cejudo is on an extremely impressive win-streak. After taking down Demetrious Johnson in a decision victory at UFC 227, the ‘King of Cringe’ stopped TJ Dillashaw in a fast and furious finish at UFC Brooklyn, at the beginning of 2019. The former Olympic gold medalist then looked near unbeatable when he stopped Marlon Moraes, adding the UFC bantamweight title to his growing list of combat sports accolades, and took on the moniker of ‘Triple C’.

This weekend, Cejudo will take on Dominick Cruz for the bantamweight championship belt at UFC 249. While many consider ‘The Dominator’ the best 135er of all time, the question remains whether or not he can compete with top-tier competition after such a long layoff, having not fought in four years.

Earlier this week, Cejudo and Cruz got rather nasty in a conference call (as transcribed by MMA Fighting).

“You better start collecting unemployment checks because I’m taking your ass out,” Cejudo warned. “‘Dominique!’ You know I’m the real deal. You know I’m coming. You ain’t getting past three rounds.”

“Yeah, okay. You’re short, I know that,” Cruz bit back. “And I know that you’re gonna have a hard time finding me, little man.”

“Remember that, ‘Princess,’” Cejudo retorted. As is often the case with Cejudo’s trash talk, it was unclear whether or not he was seeking to insult his opponent or ironically perform his trademark ‘cringe.’

“Okay. We’ll see, man,” Cruz answered. “When you’re in there missing, you’re gonna find out real quick the difference, and the amount of rounds that I’ve got in there over you. I’ve got hours in there over you, little man. You’re a wrestler. I’m about to prove that and expose you real quick.”

“You just try not to break a nail, Princess”, Cejudo repeated, “You just make sure to make it on May 9th.”

A major point of contention in the call (as well as a major point of interest in this fight) was whether or not Cejudo and Cruz can bounce back from injuries.

“You’re coming off of shoulder surgery, too, tough guy,” Cruz reminded Cejudo. “How are you any more tough than me? You’re just coming back from surgery after a year. [Have] you ever done that? Nope. I’ve done it several times.”

“I’ve been the UFC flyweight champion, I’m the bantamweight champion of the world, and I am the greatest combat sports athlete of all-time,” Cejudo said.

“We’ll see about that. There you go, plugging your credentials again, but none of those mean anything to anybody,” Cruz said. “It doesn’t make a difference for anybody but yourself. I had the belt for 10 years…”

“You only fought two times in 10 years, Dominick,” Cejudo interjected.

“Well you prove it to me, Princess, on May 9th. Because on May 9th—like I said before—I’m serving GOAT,” Cejudo bragged.

Further into the conversation, the exchange turned heated again when Cejudo addressed the issue of whether or not he truly believed himself to be the greatest combat sport’s athlete of all time.

“They don’t have a Michael Jordan of MMA,” Cejudo said in response to the question, to which Cruz interrupted

Do you think this fight will decide the greatest bantamweight fighter of all time? And who will walk away victorious: Henry Cejudo or Dominick Cruz?