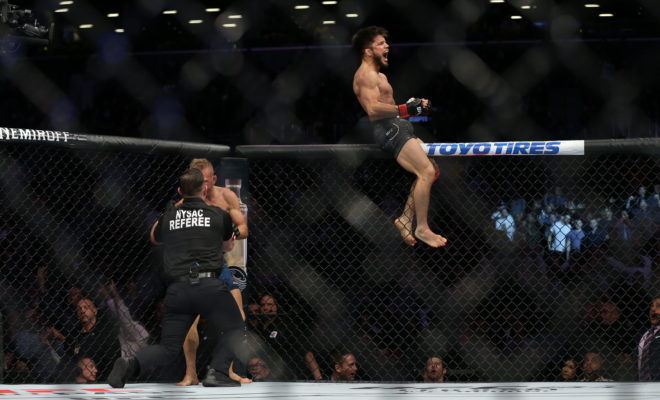 Henry Cejudo doesn’t like to boast about winning gold.

Or, maybe he does sometimes. Either ways, the former Olympic gold medalist has now completed a feat no one else can boast about: becoming a two-division champion in the UFC. Cejudo defeated Marlon Moraes at UFC 238 to become the new UFC bantamweight champion. What made his victory even more impressive, was the fact that Henry injured himself just days before the fight, and many expected Cejudo to pull out of the fight.

However, the UFC flyweight kingpin successfully added yet another feather to his cap. And now, Henry Cejudo is eyeing something monumental — a fight with one of the best boxers on the planet, Vasyl Lomachenko.

After the invitation, Loma responded, which could be interpreted as his way of expressing interest in a fight with Cejudo.

UFC President Dana White recently talked about his plans to “reinvent” boxing, by using the same strategy that has worked for him with the UFC. White is also more open to doing cross-over fights between UFC fighters and professional boxers, after the massive success he had with Conor McGregor and Floyd Mayweather Jr.

What do you think, fight fans? Is yet another big cross-over fight on the cards?