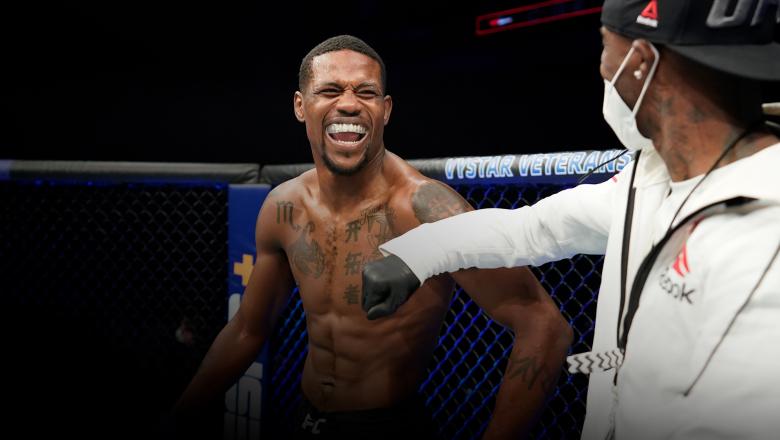 Kevin Holland is tired of talking about UFC middleweight champion Israel Adesanya, who he accuses of taking steroids. The 28 year old also says that he doesn’t regret questioning Khamzat Chimaev’s heart over COVID complications, adding that he seemed fine when they had a run-in in a hotel lobby recently.

“He Was Doing Steroids”

Holland is set to fight longtime contender Derek Brunson in a high-stakes top 10 middleweight fight in the UFC Vegas 22 main event this weekend. During the pre-fight media scrum (as transcribed by MMA Junkie), one reporter asked ‘Trail Blazer’ about Adesanya, but he was in no mood to talk about him, other than accusing him of taking steroids.

When asked more questions about Adesanya, Holland accused the MMA media of hyping up the middleweight champion too much, despite the fact that he just lost to Jan Blachowicz in a light heavyweight title fight at UFC 259.

Last month, Holland criticised Chimaev for pulling out of his UFC Vegas 21 bout with Leon Edwards due to ongoing health issues as a result of having COVID last December, telling ‘Borz’ to “get the f*** over it”. Despite the fact that the Russian born Swede later almost retired from the sport as a result of the prolonged effects of COVID, the brash American doesn’t regret his comments.

“Why would I regret those comments?” Holland asked. “He still looks pretty in all his pictures. Everybody says he feels bad. I had seen him like literally two days before he said he felt bad, and we were about to low-key fight inside the lobby all over again. You know what I mean? I mean, he didn’t feel that bad that hour. So, it is what it is.

“I think the guy’s personally getting better, so when he comes back and he has to fight the tougher competition, he could continue to smash the way he’s been smashing.”

What are your thoughts on Kevin Holland’s comments on Israel Adesanya and Khamzat Chimaev?