How Would A Perfect Night For Team Lakay Look At Dawn Of Heroes? 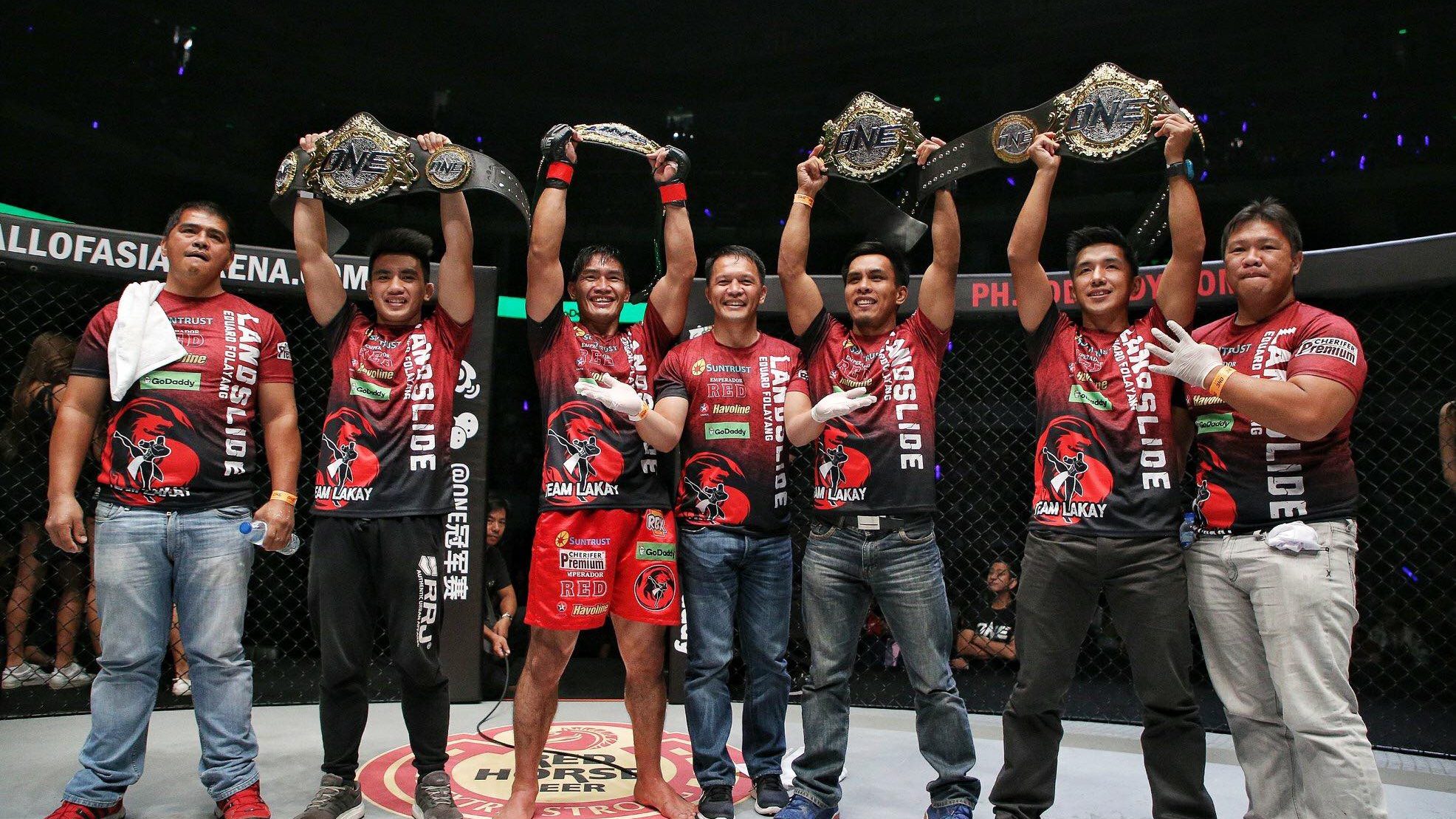 Whenever ONE Championship heads to The Philippines, any member of the iconic Team Lakay camp will be a part of the event’s spotlight. That will be the case on August 2nd at the Mall of Asia in Manila for ONE: DAWN OF HEROES. A total of five Team Lakay members will be competing, and here is how the Filipino squad can have a perfect evening.

As one of the senior members of Team Lakay, Edward Kelly has a special position with Team Lakay.

Edward has been in an up-and-down segment in his career. He won his last bout in April at ONE: ROOTS OF HONOR via KO of Sung Jong Lee, but Kelly has had an issue stringing wins together. In fact, Kelly hasn’t won back-to-back matches since 2016 when he scored KO wins over Vincent Latoel and Sunoto.

In Manila, Kelly faces China’s Xie Bin. The 21-year-old has won six bouts in a row with all of his professional matches having taken place with ONE Championship. He is a bit of homegrown talent from a promotional standpoint, but he will not be a crowd favorite. Fans in The Philippines will be cheering loudly for Kelly to hand Xie his third pro loss, and for their countrymen to pick up his seventh victory by KO/TKO.

He is a former ONE world champion who has beaten just about every major flyweight in the promotion, and that includes current champion, Adriano Moraes. Geje Eustaquio was not initially a part of the ONE Flyweight World Grand Prix. However, with so many injuries taking a toll on both tournaments, it was wise for ONE to set up alternate bouts. Eustaquio climbs into the ONE circle in Manila against Yuya Wakamatsu.

The young Japanese contender was initially in the Grand Prix. After having his moments in the first round against Demetrious “Mighty Mouse” Johnson in the quarterfinals, Wakamatsu was submitted by the legend.

Eustaquio also has an extensive grappling toolbox. Eustaquio doesn’t usually go after knockouts, and he isn’t a prolific finisher overall, but it would be feasible to project a submission victory for the Filipino. Wakamatsu can sometimes fall into traps on the ground, and the hometown crowd would love nothing more than to see the former champion finish the bout with a submission.

Former ONE Featherweight World Champion Honorio “The Rock” Banario is considered one of the top lightweights in ONE Championship. He may not belong to the top three, but definitely a top ten contender. His best weapon is his powerful left hook which he loves to unleash on a regular basis.

Banario isn’t limited to knock out power, however. He does possess a well-rounded skill set complete with wrestling, Brazilian jiu-jitsu (or as the Baguio City boys love to refer to it as “Baguio Jiu-Jitsu”), and world-class wushu.

Dae Sung Park is a worthy opponent for Banario. The ONE Warrior Series product comes forward with aggression and loves to mix it up. Look for Banario to return to his winning ways with another scintillating knockout victory.

In both of his bouts, Danny Kingad has had his opponent switched before the match. In the quarterfinals, Kingad was supposed to face Andrew Leone. An injury forced him out, and he was replaced by Senzo Ikeda. Kingad defeated Ikeda by unanimous decision. In the semifinals, Kingad was set to face Kairat Ahkmetov, but the latter suffered an injury that pushed him out.

Ahkmetov defeated Reece McLaren in the quarterfinals, but because of the former’s injury, the latter will step in to replace him. Kingad will be the favorite to win against McLaren, but simply winning isn’t what would cause the fans in the Philippines to erupt.

Kingad is an explosive performer who is capable of scoring a memorable KO. McLaren is a wiz on the ground, and that’s where he will prefer to operate. If Kingad catches McLaren with a crushing right hand that leads to a KO, it will be the ideal finish for him and his fans.

There are two championship bouts scheduled on the card, but you could make the argument the most intriguing match is Eduard Folayang vs. Eddie Alvarez. Everything about this match is compelling. The stakes are high. It’s not just a battle between two legends of the sport, it’s also a crossroads match.

Both Folayang and Alvarez are coming off losses on the same card.

Back on 31 March in Tokyo at ONE: A NEW ERA, Alvarez lost his promotional debut to Timofey Nastyukhin. The match was a quarterfinal bout in the ONE Lightweight World Grand Prix. It was one of the biggest upsets of the year. The loss also was Alvarez’s second consecutive defeat.

That wasn’t the way he wanted to begin his ONE journey. In the main event of that card, Folayang lost his ONE Lightweight World title to Shinya Aoki.

Folayang looked overconfident in his ground game, as he allowed himself to go to the mat with the submissions expert. It didn’t take long for Aoki to exact revenge from a loss back in 2016. Aoki used an arm-triangle choke to regain his title.

Suddenly, both Folayang and Alvarez need a victory in the worst way. To add even more weight to the bout, injuries to Nastyukhin and Lowen Tynanes has forced ONE to convert the bout into a ONE Lightweight World Grand Prix semifinal match.

The winner will get a shot at Saygid Guseyn Arslanaliev in the finals. The winner of the Grand Prix would be in a position to challenge the current champion, Christian Lee. The fans in Manila would love nothing more than to see Folayang rise from the ashes again with a dramatic KO.