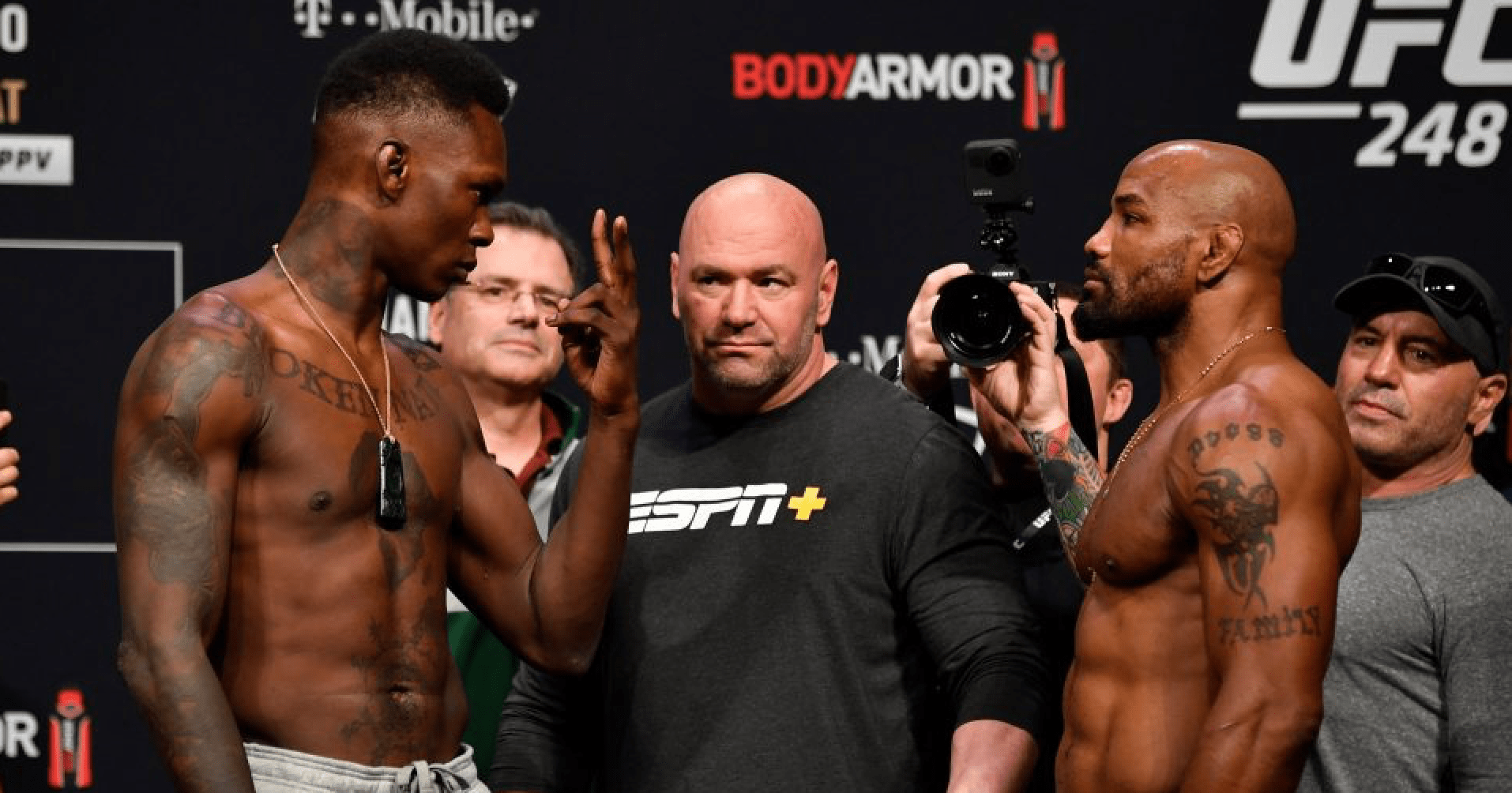 When Israel Adesanya defended his UFC middleweight title against Yoel Romero at UFC 248, the MMA world was expecting fireworks. Unfortunately however, we barely even got sparklers.

Not surprisingly, both Adesanya and Romero faced a backlash from the fans following the lacklustre main event. In the weeks that followed, ‘The Last Stylebender’ hit back at his critics, blaming ‘The Soldier Of God’.

Speaking to MMA Fighting recently, Adesanya continued to hit out at his critics and Romero.

“I was there to fight. I was there actually attacking, probing, being smart about it. His first chance was when he actually punched my eyeball and sent my eyeball into the back of my skull. That was his chance. Anyone could see, ‘He’s compromised, attack the guy, he’s compromised,’ but he stood there still for like another two minutes.

After getting rocked by Romero early on, Adesanya adapted his game plan. While according to Israel, Yoel failed to capitalise on the best strike landed in the first round.

“I thought OK, be smart about how you enter next time,” Adesanya explained. “Don’t enter straight away, down the middle, angle off to the side first before you attack, or make sure your foot is in the right spot before you attack so his left hand’s not there. He was never able to land that throughout the whole fight again, if you notice.

“Look at Anderson Silva in the second round when he jabbed me in the eye, and I started seeing two Andersons. Anderson started putting the pressure on, feints, looks like he was actually bringing the fight. But a guy who hits you directly in the eye, first punch landing in the fight, and he just stands there for another f***ing two minutes. That’s so idiotic. And then the rest of the fight he just stands there and expects you to do something, and I’m just tagging him. It was just stupid on his part.”

Despite the criticism, Adesanya says he can sleep well at night, knowing that he fought a smart fight and didn’t get dragged into a 25 minute war with the man generally regarded as the scariest guy in the UFC middleweight division.

“This quarantine would have sucked. If I’d gone out there and fought a smart game plan and did what I did and he beat me on skill, I’d be able to sleep at night.

“But if I went in there made that same mistake twice and did something reckless that got me dropped or finished, it would be really hard to sleep at night right now. Because I know I compromised myself.”

In the last couple of days, Paulo Costa, who will challenge Adesanya for the 185lbs title next, described the fight as ‘the worst fight ever’. An opinion probably shared by many of the fans in attendance at UFC 248. Not that ‘The Last Sylebender’ cares what the crowd thought.

“I don’t give a f*** what these drunks are thinking about in the crowd, all these fans, quote-unquote, I don’t really give a f*** what they think,” Adesanya said. “I know for me, I wouldn’t be able to sleep with myself at night. That’s what matters.”

Did Israel Adesanya do the right thing in playing it smart to defend his UFC middleweight title against Yoel Romero at UFC 248?