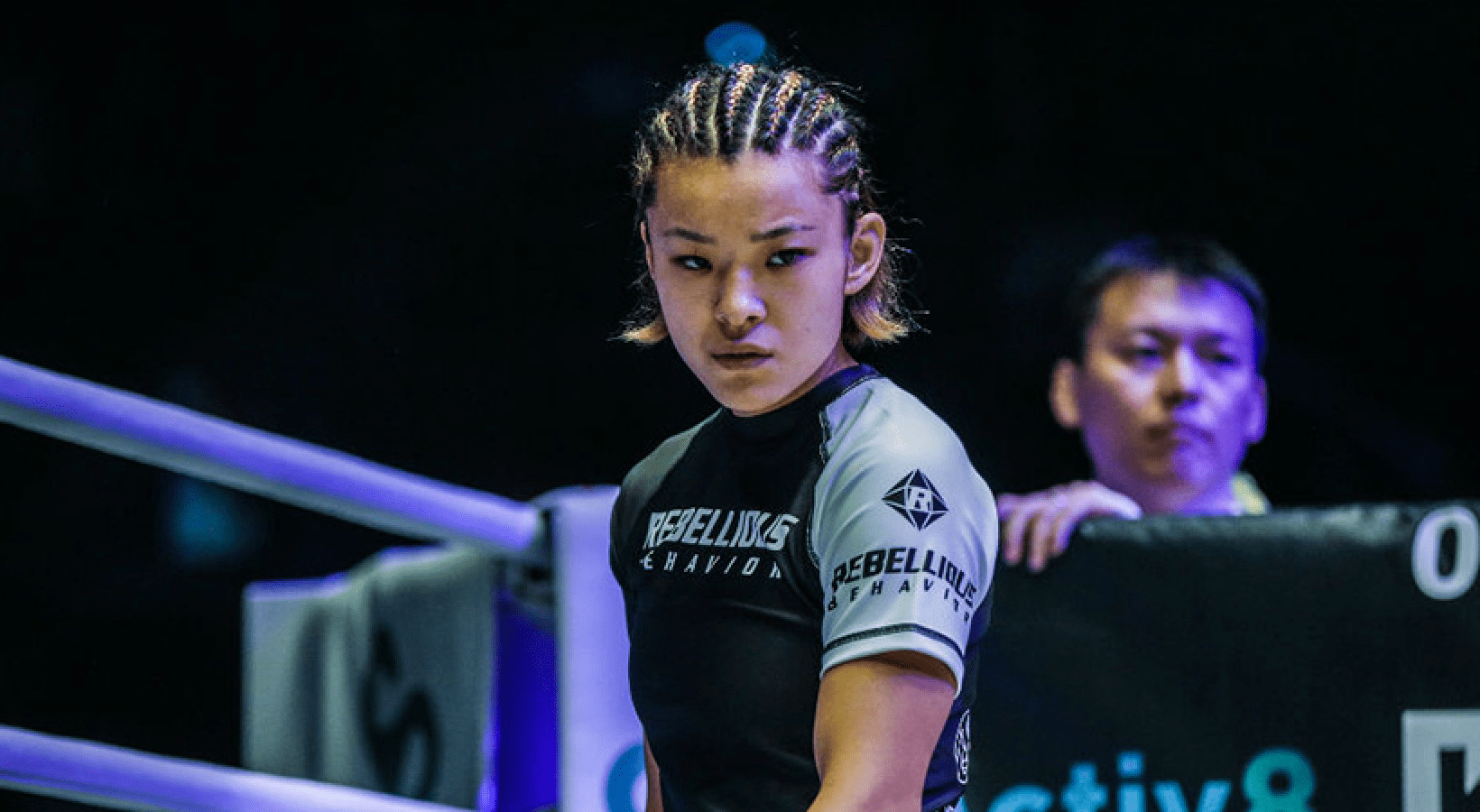 Itsuki Hirata wants to showcase her explosive Japanese power against Alyse Anderson in the first round of the ONE Atomweight World Grand Prix at ONE: Empower on May 28th.

The undefeated 21 year old has been on a tear ever since she made her professional debut in ONE Championship two years ago. In her most recent outing, Hirata scored a second round TKO win over Mirai Nakamura at Road To ONE: Young Guns, an event held by ONE in partnership with the Japanese promotion, Shooto.

“I Wasn’t Happy With My Performance”

Speaking exclusively to Asian Persuasion MMA, Hirata said that although she came out victorious against Nakamura, she wasn’t happy with her performance.

“In my last fight against Mirai Nakamura, I came with the intention to win,” Hirata said. “But I wasn’t very happy with my performance. I heard about the Grand Prix before the fight, so I definitely knew I needed to do my best in this fight in order to be selected.”

Commentating her fight against Nakamura was Shinya Aoki. For Hirata, it was not only an honour for him to call her fight, but it’s always reassuring for her to receive his support and feedback.

“He’s an athlete that I looked up to since I was little, and to be able to get closer to this figurehead I look up to, and respect a lot, it means a lot to me,” Hirata said. “He’s constantly reassuring me and encouraging me before and after my fights. So, I appreciate that a lot.”

Hirata will face former Invicta atomweight Anderson in the opening round of the Grand Prix. The Judoka understands that her foe will have a height and reach advantage on the night, but she’s looking forward to the challenge.

“She is a bigger fighter than me,” Hirata noted. “She has got longer limbs, longer reach, so I would like to see how I match up with her, and how I could keep up with her. I watched her Invicta fights, but in general, I only watch videos of my opponents a little. I don’t agonise over them and study them so diligently.”

Should she qualify for the semi-finals, Hirata will face the winner of Meng Bo vs Ritu Phogat. Having trained with ‘The Indian Tigress’ previously at Evolve MMA in Singapore, the Tokyo native understands her strengths very well. As she also does with the Chinese 25 year old.

“Two years ago, I was training at Evolve and had to chance to train with her (Phogat),” Hirata said. “Her wrestling was amazing, and her ground-and-pound power was amazing. If I go up against her, I would like to keep the fight on the feet.

“Meng Bo is one I’m most interested in going against. Her physical strength is very impressive, her right straight punch. I’d like to see how my takedowns would go against her. In general, I find that Chinese fighters seem to have a lot of heart.”

Before Phogat takes on Meng however, she has decided to risk her spot in the Grand Prix by taking on Bi Nguyen at ONE: Dangal on May 15th.

On the other side of the draw, former RIZIN champion Ham Seo Hee takes on the division’s number one contender, Denice Zamboanga. Hirata has high praise for both fighters, but she’s very interested in competing against the South Korean in the future.

“The fact that Denice is going against Ham Seo Hee says a lot,” Hirata said. “She’s a good grappler and a very strong fighter. Ham Seo Hee is [also] a very strong opponent, she’s very popular among Japanese fans, as she’s come to the top of Japanese promotions as well. If we were to get into a close striking situation, I’d be interested in how much I can keep up with her. So I am very interested in competing with her.”

Also on the other side of the draw, Stamp Fairtex takes on Alyona Rassohyna in a rematch. The first fight between the two ended in a controversial manner at ONE: Unbreakable 3, as the Ukrainian was awarded the win after the former two sport champion was deemed to tap moments before the final buzzer. Hirata acknowledges both athletes’ strengths, but believes the Thai 23 year old has weaknesses in her ground game that she could exploit.

“Stamp is a striker with a Muay Thai base. I see a lot of holes in her grappling game, and that’s something I need to take advantage of,” Hirata said. “Alyona is physically very strong. In her fight against Stamp, I noticed that she has great grappling, but she’s a very good striker too, with a strong spirit, she fights till the end.”

What To Expect At ONE: Empower?

Hirata is known primarily for her grappling prowess but come May 28th, she plans to give the world a glimpse of her striking and explosive Japanese power.

“You can expect explosive Japanese power from me, as I look to put my striking on display,” Hirata said. “I intend to use my striking, and I am really looking forward to the fight.”

Do you think Itsuki Hirata will have her hand raised when she faces Alyse Anderson in the ONE Atomweight Grand Prix opening round at ONE: Empower?