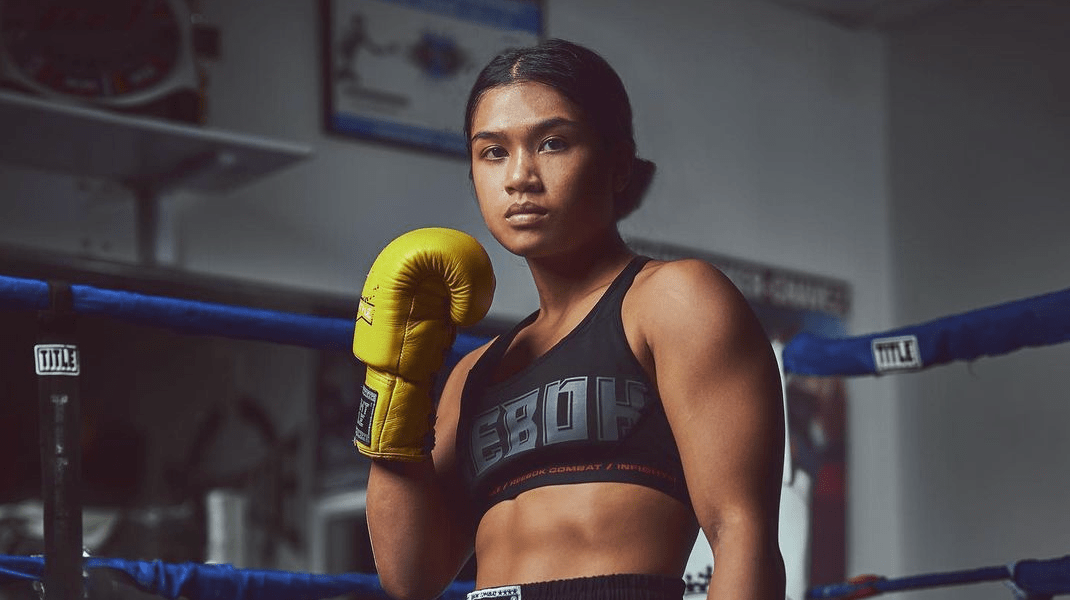 Jackie Buntan is set to make her long awaited ONE Championship debut this Friday night at ONE: Fists Of Fury against Wondergirl Fairtex. Originally scheduled to make her debut in early 2020, she will now grace the ONE Circle under ONE Super Series Muay Thai rules.

“Itching Just To Be Able To Fight Again”

Buntan can rarely contain her excitement ahead of her fight. In an exclusive interview with Asian Persuasion MMA, the Filipino-American said that what pumps her up even more is the fact that she will be competing on the global stage with ONE Championship.

“I’m extremely excited,” said Buntan. “I’ve gotten people asking me, ‘Are you just gonna put all that frustration of waiting?’ And it’s not even frustration. It’s just itching just to be able to fight again and compete again. I’m just excited to do that, especially on no other stage than the world stage with ONE Championship.”

The Boxing Works representative signed to ONE Championship over a year a year ago but her debut was delayed as a result of the global coronavirus pandemic. But now, the wait is finally over and her first opponent may perhaps be her toughest yet. She believes that the time off however, has allowed her to refine and sharpen her skills before she finally steps into the ONE Circle.

“When I got signed, I was actually supposed to make my pro debut in the US,” Buntan said. “But due to medical reasons, that card got cancelled. And then that [ONE] contract came right after so it’s kind of like things happen for a reason.

“I was set to make my debut on March 2020, literally two weeks before the lockdown in LA. So ONE had already cancelled the fight by then. Due to the pandemic, everything was on pause. It’s been a long delay but I’m ready. I’ve been working throughout the year, bettering my craft, my skill, my IQ. So I’m ready to show it all to everybody.”

Like many people, the lockdown allowed Buntan to reflect on things she would usually have looked past under normal circumstances.

“I really took the time to appreciate things I took for granted,” said Buntan. “Whether that’s something as small as making my recovery, catching up with family I don’t talk to as much. But in terms of training, I’ve been staying as consistent as I could with my Muay Thai training and my strength and conditioning. And that’s helped keep my head in the right headspace and physically just getting better, smarter and stronger.”

As a member of Boxing Works Gym, Buntan is a teammate of ONE atomweight kickboxing champion Janet Todd. The two will not be competing on the same event but the champion will co-headline ONE: Fists of Fury 3 against Alma Juniku. The ONE debutant believes that having her teammate with her in Singapore will help ease any nerves she may have.

“It’s super exciting,” Buntain said. “There’s always nerves coming into fights, but it’s always helpful when you have a teammate fighting with you who’s there with you. So I’m definitely happy that she’s here with me.”

With both women competing in Muay Thai, the two have been homing in on their Thai boxing craft during their joint training camp.

“Obviously, the past year, she’d spot more than I have,” said Buntan. “But we definitely push each other. Whatever she has to work for her training camp, I’m gonna be working the same thing. Her last fight was a kickboxing fight, we’re not clinching much and throwing elbows.

“But for this fight, we’re doing Muay Thai rules so it worked out perfectly. We were able to train the same discipline, same game plan and whatnot. So it melded together really nicely.”

“Our Styles Will Clash Really Well”

In terms of fighting style, Buntan describes herself as a traditional Muay Thai fighter.

“Definitely kind of Thai-style,” Buntan said when asked about her fighting style, “I guess I could be more of a counter fighter. But my coach Bryan [Popejoy] is so knowledgeable. He’s able to incorporate different styles in us from different disciplines; whether that’s boxing, kickboxing. And that goes for movement, footwork, all of that. Not just necessarily how to throw stuff. It goes for your movement as a whole.

“You’ll be seeing a lot of traditional Thai style. But I like to say that I have my own type of style when I fight as well. So you’ll get to see that in about three days.”

Buntan will be facing surging phenom Wondergirl, who represents the fabled Fairtex Training Center in Thailand, and she knows she’ll have her hands full but expects their fight to be an epic clash of styles.

“She’s a very game opponent,” said Buntan. “I’m excited to fight her. It’s gonna be a good fight. I feel like both of our styles will clash really well, making it an exciting fight for people to see.”

Wondergirl racked up two straight knockout victories last year in her first two fights in ONE Championship, and currently looks unstoppable. Having watched those two bouts, Buntan thinks that their fighting styles will be a recipe for the perfect fight.

“They both didn’t last the full three rounds,” Buntan said. “But I got to see some of her arsenal. And it was pretty evident that she likes to come throw her hands a lot. I like to throw my hands a lot too, so if it’s a good clash of styles. It’ll be a nice good clean exciting fight with the both of us.”

Given the current situation, Buntan feels fortunate to be able to compete in a time like this. Particularly on such a stacked card. The 23 year old has even tried to get a sneak peek at some of the superstars competing at ONE: Fists Of Fury.

“It’s super exciting,” said Buntan, “I didn’t get to see the card until two or three weeks ago. Just looking at the lineup, and then there’s me at the bottom. I was like, ‘Is this real? That’s insane!’

“With COVID and all, the movement throughout this week, the movement of people is limited, given they kind of want to lessen that. I’m just trying to get little glimpses of the stars here and there, if I can see any.”

Like all athletes, Buntan simply has one goal in mind: winning a world championship. While she would ideally like to capture a ONE Muay Thai title, becoming a two-sport champion sounds even better to her.

“To get the title,” Buntain answered when asked about her big plan in ONE Championship, “Obviously, Muay Thai would be the title I would love to get. I’m signed up for kickboxing as well, so to be a two-time champion in both disciplines would be an amazing goal of mine.”

With her Boxing Works teammate competing in a non-title Muay Thai bout at ONE: Fists of Fury 3, Buntan predicted a victory for her fellow American.

“JT for the win,” Buntan said. “Always gotta support her. She’s always bettering her craft and her skillset. She’s gonna put on a good show, regardless.”

And she sounded just as confident when predicting the outcome of her own fight.

Buntan hopes start the year with a win. But she is even more grateful to be able to compete again.

“Starting my debut, first fight of the year, with a win would be ideal,” Buntan said, “I’m going to do everything in my power to make that happen. But just being able to start the year off fighting, I’m grateful for it, given all the crazy weird we just came out of.”

Who emerges victorious when Jackie Buntan takes on Wondergirl Fairtex at ONE: Fists Of Fury?