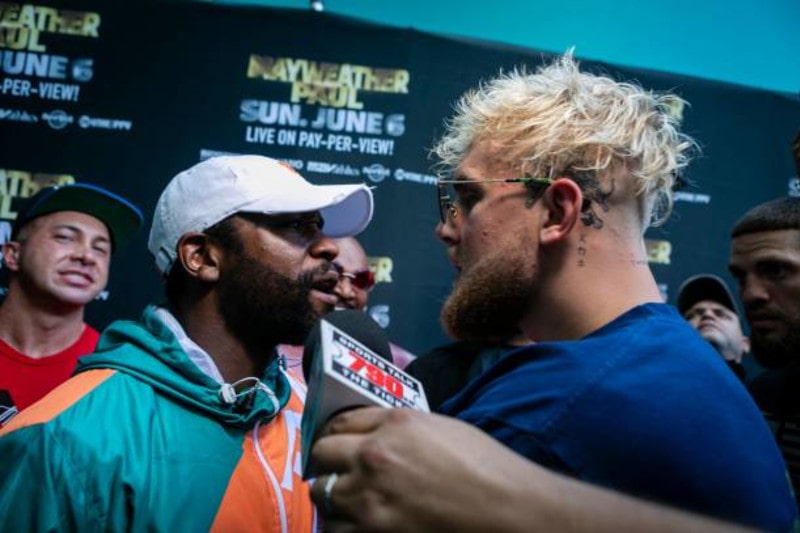 Entertainer turned professional boxer Jake Paul, says he had no idea that five division world champion Floyd Mayweather would get so upset over a hat.

Things got out of hand at a media event earlier this month in Miami ahead of Mayweather’s boxing bout with Logan Paul, which takes place on June 6th. During the event, ‘Money’ and ‘The Problem Child’ came face-to-face, and the YouTube sensation plucked his hat and attempted to run away.

He was chased down and caught by Mayweather’s security guards, who kept a hold of him until their boss was done throwing some punishing shots on Paul, which the 24 year old claims didn’t land.

Speaking to Chael Sonnen (as transcribed by MMA Fighting), Paul detailed his ‘hilarious’ encounter with Mayweather and his security team.

“It was sort of a sensory overload with everything that was going on,” Paul said. “There was, like, eight guys around me all grabbing me, some hitting me in the leg. I’m holding onto his hat for dear life. I was like, ‘No! I’m not letting go!’ And that was the main thing that they were concerned about it, like, ‘Give us the f***ing hat, give us the hat!’ And I was like, ‘No! Noooo!’

“Then they finally got the hat and then I see this angry Floyd Mayweather, I couldn’t believe it. One of his security guards had my shirt wrapped around his hand so I couldn’t get away, and he just comes running at me and he’s throwing punches over the security guard. I’m literally like, ‘Oh wow, this is crazy,’ but the funny thing about it was none of the punches were even coming close to me at that point and he actually punched his own security guard in the side of the head. Absurd moment, hilarious. I didn’t think he was gonna get that mad over a hat.”

Having made their name through YouTube pranks and stunts, the Paul brothers are no strangers to creating viral content. Although to Jake’s surprise, his stunt on Mayweather drew a lot more attention than he expected.

“Look, it’s show business,” Paul said. “I didn’t think it was gonna go that viral, I thought it was gonna be like, ‘This is funny. Jake Paul’s an amateur little kid,’ which by the way, that’s what I was going for. I was like, this is going to be hilarious, I’m going to be like a little kid stealing someone’s hat on the playground.”

Not Intimidated By Mayweather

Paul is a 3-0 professional boxer himself, with his most recent win coming against Ben Askren via a first round TKO last month. Mayweather on the other hand, is 50-0 and regarded as one of the greatest boxers in the history of the sport. Despite the difference in experience, the younger Paul brother didn’t feel starstruck meeting the 44 year old.

“Honestly, no, I’ve never been the type to get starstruck,” Paul said. “I think the reason being is because after I got famous, nothing changed. You’re not cooler, you’re not a different person. If all of a sudden I had 20 million more followers, I still wake up, drink the same coffee, put my pants on the same way. My dad always taught me, ‘Hey, you’re going to hang out with this celebrity or whatever, but look, we’re all just humans at the end of the day.’ I just look at us all as individuals and I was kind of just chilling.”

What do you make of Floyd Mayweather’s reaction to Jake Paul stealing his hat?