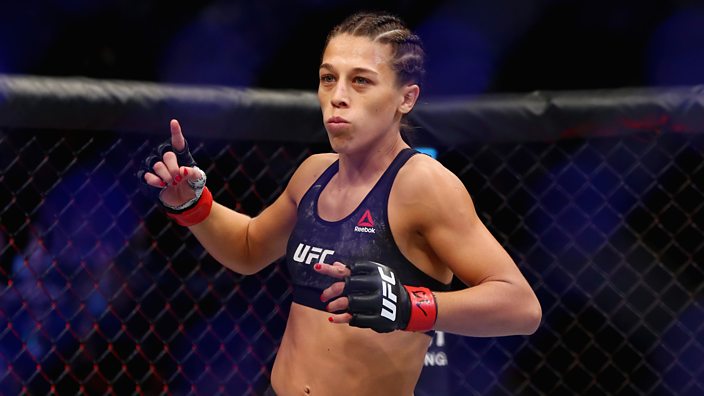 Joanna Jedrzejczyk and Michelle Waterson are scheduled to face each other in a pivotal strawweight fight this weekend at UFC Tampa. Joanna has lost three of her last four fights, previously fighting Valentina Schevchenko at flyweight. Waterson on the other hand is coming off three wins on the bounce, and a win over Joanna would put her next in line for a title shot. Joanna also mentioned that the UFC promised her a title bout with a win over Waterson.

However, as per Combate, Joanna Jedrzejczyk has reportedly informed the UFC brass that she will not be able to cut down to 116 lbs for the stipulated strawweight encounter. According to the same report, “Karate Hottie” is refusing a catchweight fight, which now throws the main event into jeopardy.

Michelle Waterson (17-6 MMA) was also reportedly offered two different opponents by the UFC – Amanda Ribas and Mackenzie Dern. However, Combate also reported that the JW fighter turned down both the fights, refusing to change opponents on such short notice.

Furthermore, if Waterson refuses to fight at catchweight, and UFC is unable to come to terms with her on a replacement for Joanna, it is being reported that the promotion will find a replacement for Michelle Waterson instead, and Joanna can fight at catchweight. Currently, Angela Hill’s name is being mentioned as a possible last minute opponent for Joanna.

It was also mentioned in the report that if UFC is unable to come to terms with Michelle Waterson, she will be moved to the UFC 244 card in November.

It is now being reported that Waterson has been given two options: Either fight Joanna at catchweight (120 lbs) this weekend at UFC Tampa, or fight Jessica Andrade at UFC 244 next month.

While these are the responses from Michelle and Joanna since we reported the story last night: