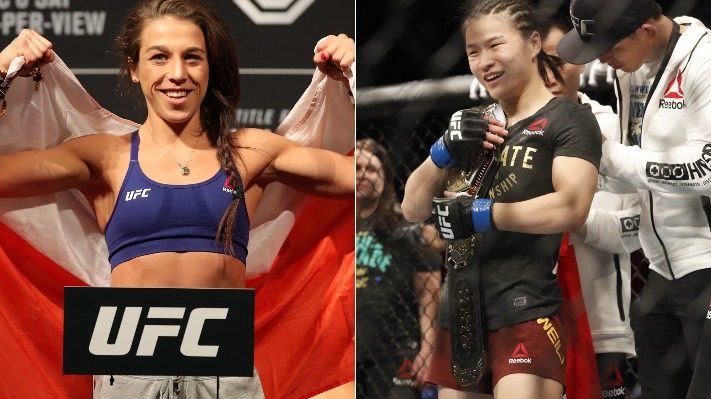 Joanna Jedrzejczyk recently admitted that she was offered Weili Zhang thrice before the Chinese strawweight fought for the title. The former champion was speaking on the Eurobash podcast about being offered a fight with the current champion, but revealed that she turned those fights down.

Joanna will be fighting Michelle Waterson on October 12th, and believes that a victory over ‘Karate Hottie’ will be enough to fight for the title. As fate would have it, Zhang faced Jessica Andrade in Shenzhen, and beat the former champion within the first minute of the first round to capture the title.

However, according to Joanna, Weili needed her when she was offered the fight, but she thought that fight would only impede her journey to reclaiming the throne.

“The day before this fight happened between [Jessica] Andrade and [Weili] Zhang, I said that this fight was going to end in the first round and I put my money on Zhang”, Joanna said (transcript via MMA Fighting).

“I know how strong Jessica Andrade is, and I was surprised by how big Weili Zhang is. Jessica Andrade is kind of short but she’s very muscular; she’s a big girl for the strawweight division, but Weili Zhang is very strong, she has big guns. When I saw Jessica training ahead of the fight on her social media, I was really not impressed. I was like, ‘Oh sh*t if she really wants to defend the belt she should be put in more’, but she didn’t do that.”

Joanna Jedrzejczyk then spoke about turning down fight with Zhang Weili three times, before Weili was given a crack against the then champion.

“She’s good, but the truth is they offered me Weili Zhang three times before that fight and the thing is, she needed me. Okay, she’s the champ now so it might look like she never needed me to become someone. Sometimes people are like, ‘Do you know who she is now?’ Of course I know who she is, but I fight in the Octagon, you know? I’m a professional athlete, I’m a businesswoman and I know who I am. I don’t do fights on Twitter. If [others fighters] call me out, I like it because I know I am in a strong position. Why are they calling me out? Because they know I can bring them to a different level. Maybe they can be lucky and win against former UFC champion, a dominant champion, which I was. [That would allow them to] get better money, get better exposure. Of course, they offered me Weili Zhang, but my goal was to fight for the belt. I took my spot, now I’m fighting Waterson and then I will go for the belt. Slowly, step-by-step, I will reach my goals and my dreams”, she said.

“The thing is, there is a new UFC Performance Institute in China, so they probably needed a good fight and they just gave the title fight to this Chinese chick. She won, good for her; I’m very happy for her. I think she’s very strong, she’s very dynamic and she’s a good puncher. I hope she’s going to be a good champ for the UFC and the division before I face her.”

Joanna also spoke about Weili putting her on blast during UFC 242, when the current champion said Jedrzejczyk now isn’t as good, as she was when she was the champion few years ago.

“You all should ask her why she was calling me out”, said Jedrzejczyk. “These girls think they can talk when they have the strap, they talk whatever sh*t they want to talk when you are losing, Look at how many of them wanted to call me out when I lost to Rose, they were like, ‘Now we can beat Joanna because she lost’. When I was a dominant champion, they were trying to get the belt, but nobody could keep the pace with me when they faced me. They can talk whatever they want, I’m too classy and too serious for all that bullsh*t.”