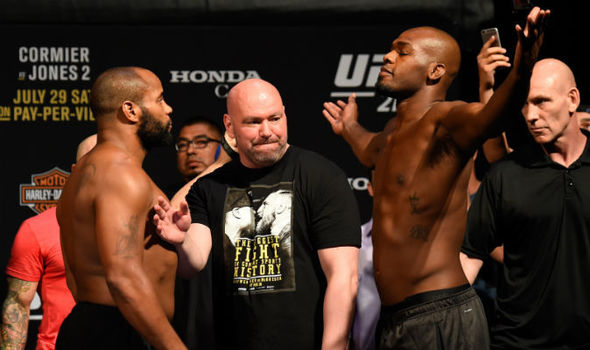 Daniel Cormier has a huge fight in front of him this weekend, when he will defend his UFC heavyweight title against the man he won it off, Stipe Miocic. Despite the magnitude of this fight, a lot of the talk surrounding Cormier, continues to be on a certain Jon Jones. And more specifically, if and when will meet inside the Octagon for a third time.

Well according to Jones, there will be no third fight between the two. Responding to Cormier speaking on The Ariel Helwani Show, the UFC light heavyweight champion took to Twitter to say that he guarantees that he and Cormier never fight again. Stating that ‘no way will he lose that weight again, no way will he be willing to reface those nightmares that comes when facing the beast’.

If a fight between the two were to happen, it would need to happen soon. Cormier has openly spoken in the past about wanting to retire before he turned 40 years old. However, now he has turned 40, the heavyweight champion has said he needs to decide whether he wants to hang up his gloves now or continue a little longer. As he told MMA Fighting in a recent interview.

“I want to be a guy that goes out on his own terms. I know that as you turn 40 years old, that time starts to near. I just have to decide if that time is now or a little bit later down the line.”

Cormier added that at this stage in his career, he would only consider delaying his retirement for a huge fight.

“If you have a guy that’s in my situation that’s won 90% of his fights and been a champion and lived this tremendous life that I’ve been blessed, you don’t want to stand across the Octagon from just anybody. It needs to be something big.”

And fights wouldn’t get much bigger than a trilogy with Jones. But as Jones pointed out, is he prepared to move back down to 205lbs, after three fights at heavyweight? UFC president Dana White has stated that he would like to see the trilogy fight at heavyweight, and that would certainly add some more intrigue to the fight, but both Cormier and Jones have stated that they would want the fight to take place at light heavyweight.

Cormier defends the UFC heavyweight title against Miocic this weekend at UFC 241, in Anaheim, California. Jones is coming off of another successful title defence at UFC 239 last month, where he scored a split decision win over Thiago Santos.

Do you think we’ll see a third fight between Jon Jones and Daniel Cormier?

Since publishing this story, Cormier has responded to Jones’ tweets. To which Jones has replied with several more tweets.