Jorge Masvidal Fires Back At Bisping, Hopes To ‘Slap Him Up’ 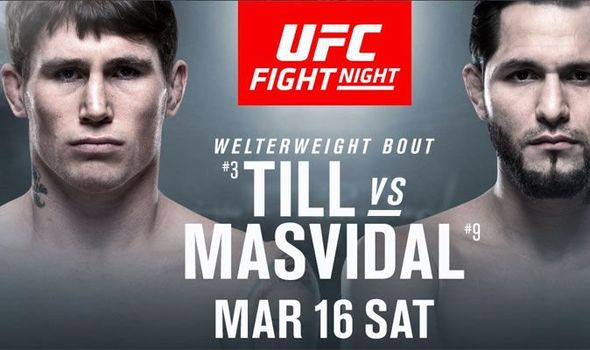 Jorge Masvidal was waiting to see if Nick Diaz would sign on the dotted line. However, with the fight falling through, Jorge will now fight Darren Till at UFC London.

The welterweight contender, however, isn’t just eyeing Till. In his mind, Jorge would still like to ‘slap up’ for UFC Middleweight Champion, Michael Bisping!

Jorge Masvidal recently appeared on BJPenn Radio, and talked about his beef with Bisping.

“I’m walking into the cage, crowd is going crazy,” Masvidal said (transcript via BJPenn.com). “My coach is giving me some last-minute instructions. I turn around, see Till, charge at him, and we start throwing down. I hit him. I make him miss. I take him down. I punch him in the face. He gets back up. I punch him in the face some more. I keep making him miss, punching him in the face. Then I just break his will and take over and just keep coming at him, getting my hand raise at the end of the day for a lot of hard work, skillset, and determination.”

“That’s it, man, ride off into the sunset, take over the island for a day or two, maybe I see Bisping somewhere in some freaking after hours place, slap him up just to end the night on a even better note, because I got such a punk talking crap to me in front of my family and kids,” Jorge Masvidal added. “He’s going to get it one day when the UFC officials ain’t around.”

Jorge Masvidal and Michael Bisping have been trading shots for years. While Bisping has since retired from the sport, Masvidal still hopes to ‘slap up’ Bisping.

“If I get to see Bisping after the Till fight and slap him up, what a super plus,” he said. “That’s like a 50K bonus if I just get to slap up that little trick bag in his own city. Oh, I’d pay a good amount of my hard-earned money. Everybody here in this knows we don’t earn the money the easiest way that it can be earned. Man, I would spend a lot of my own money just to be put in the cell with him showcasing it.”